Presented by Chris Arnsby. The observant among you might be wondering why the last write-up confidentially asserted that it covered 13 & 26 Feb 1986.... I don't know. Maybe I was thinking of a different year.
Paul Jordan: “Hello and welcome. A couple of guys up on stage that's me and him, lots of people milling around having a great time, and the music which makes today's hits. It's got to be... are you listening Steve?” Steve Wright: “Top of the Pops!! Hope you're going to enjoy the show tonight!! We've got a good one for you!! This could be number one next week!! Here's Sigue Sigue Sputnik!!”

[7] Sigue Sigue Sputnik: Love Missile F1-11. This is Paul Jordan's last Top of the Pops, so it's also your last chance to say “who?” when his caption comes up at the start. Trying to wring any behind the scenes meaning from these repeats is like using the flight of birds to forecast the weather. However, I notice Paul Jordan hosts three of the first nine Top of the Pops of 1986; which is comparable to Janice Long and Steve Wright, and more than Mike Smith and Mike Read who were all over BBC1 and Radio 1 at the time.  It's possible Paul Jordan's contractual obligation number of shows are being whisked through as quickly as possible, but it's equally possible that he was always intended as a temporary host and he's standing in for people who can't make it; Peter Powell and Bruno Brookes have not yet made an appearance this year, and John Peel takes a mysterious two month break from hosting duties during February and March. 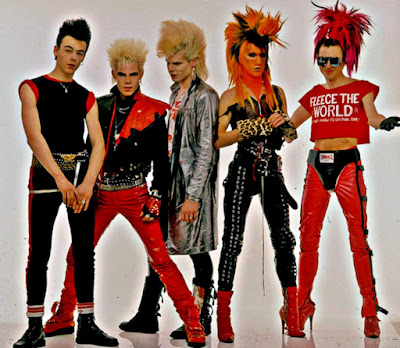 Sigue Sigue Sputnik- Yes everyone was dressed like this in 1986.

Love Missile F1-11 is this week's big production number. BBC safety certified thunderflashes are detonated by Visual Effects Designer David Vialls, the dry ice machine is set to who-left-the-freezer-door-open, and Vision Mixer Angela Wilson wheels out video effects which haven't been seen for months. How many can you spot? There's the colour replace option, and a video swirl that looks like Kalik's stun blast in Carnival of Monsters. Unfortunately Love Missile F1-11 is a bit boring. It's a song that's all introduction and no crescendo. Every time I hear it I catch myself thinking “when this gets going it'll sound fantastic,” and then the song ends.

[27] Audrey Hall: One Dance Won't Do. During the introduction to Love Missile F1-11, Steve Wright was waving a pen around and using it to point at things. Now, Steve Wright is standing in a contorted position with his pen clutching hand wedged into his right armpit and propping up his microphone-holding right hand. He looks like he's cradling a cracked rib but this is most likely Producer Brian Whitehouse's attempt to stop Steve Wright flailing his arms like a semaphore signaler startled by a wasp. We're now entering the peak of Steve Wright's fame, and presumably the pen is needed for the constant steam of autograph requests during recording breaks. “Audrey Hall, do you know that she likes croissants first thing in the morning,” is Paul Jordan's celebrity gossip titbit in the outro, but Steve Wright is concentrating on maintaining his bizarre hand in the armpit pose and cannot focus on such trivia. 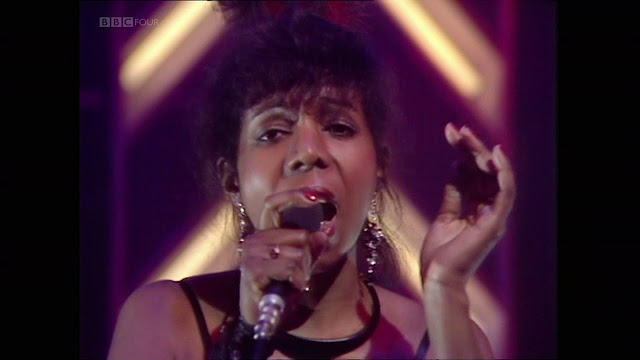 Top 40 Charts. This week's winner of the person least expected to be seen in the Top 40; Frank Sinatra.

[24] Alexander O’Neal: If You Were Here Tonight. It's barely a month since Alexander O'Neal was appearing with Cherrelle (06/01/1986) and now here he is with a solo hit. What is he wearing? It's a two piece beige suit which appears to be made of sacking. The cut of the jacket is asymmetrical, with a collar on one side and lapels on the other, that I'd describe it as half-breasted. If god permitted such an abomination to exist.

[10] Bangles: Manic Monday. I'm not a fan of the guitarist's sparkly cowboy boots, but I'd choose them in an instant over Alexander O’Neal's suit.

[1] Billy Ocean: When The Going Gets Tough The Tough Get Going. Another chance to see the video with cameos from Michael Douglas, Kathleen Turner and Danny DeVito. But... what's happened to Danny DeVito's sax break? In the wide shot he can be seen picking up his saxophone but then the video cuts to a different soloist who brings the saxy back.

It's all the fault of the Musicians Union. Danny DeVito isn't a member, so he shouldn't be shown playing. Broadcasters weren't in the mood to take on the union so to allow them to continue showing the video without problems it was re-edited. In quite a disinterested way. At one point the new version cuts to Michael Douglas, Kathleen Turner and Danny DeVito, and then cuts back to Billy Ocean with DeVito just visible in the background but, and this is the important bit, he's not playing the saxophone.

Incidentally, if you're wondering why it's not okay for Danny DeVito to be shown (pretending) to play the saxophone but it is okay for Michael Douglas, Kathleen Turner and Danny DeVito to mime along to the backing singers; well, there's a Musicians Union but no Singers Union. 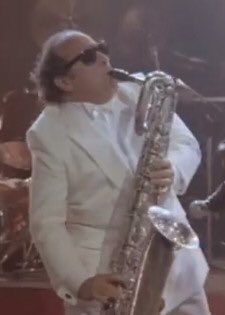 
[29] Colonel Abrams: I’m Not Gonna Let You. Steve's got his pen out again. On next week's Top of the Pops it's Gary Davies and Dixie Peach, but in the meantime here's audience dancing, credits, and autographs for everyone excited to meet the brain behind 1984's Top 61* single The Gay Cavalieros.

*The most successful of Steve Wright's three singles.