The Lambda Factor
In the Seventies Terrance Dicks was known as a Doctor Who script editor and writer and here he brings his accomplished storytelling credentials to Space 1999 with mostly successful results. Using only the regular sets with events taking place solely inside the base, Dicks employs his fastidious skills to mould a story that is different to many of the regular episodes. While there is a threat outside- in the slightly unimpressive form of a spinning wheel on the screen- it is inside where he makes a virtue out of existing resources. He did this with Doctor Who, penning `Horror of Fang Rock` set entirely in and around a lighthouse. Here, the death of a technician from what seems like internal pressure is the most serious of several incidents that occur when our rotating space phenomenon is in the vicinity. People are getting tetchy, instruments are malfunctioning and yet another nuclear powered device nearly blows itself up. 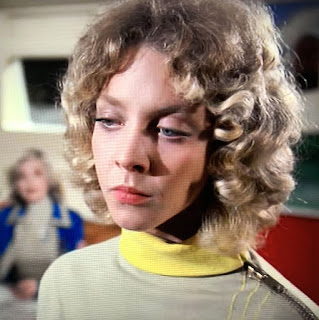 Two people in particular suffer the worst. Koenig sees the apparent ghosts of two people he had to leave behind in a mission years ago because they had an incurable plague. They pop up when he tries to sleep and he gradually loses his authoritative exterior as his own guilt haunts him. Martin Landau is very effective in these scenes bringing across the trauma. The other recipient of these powers is Carolyn Powell. Part of a love triangle she is initially one of the suspects but in a well-staged scene where we see her in action it becomes clear she has used her new found powers to conduct a personal vendetta. Deborah Fallender is excellent in this role which encourages us to initially see her as a slightly lovestruck young woman but who ultimately becomes self- appointed commander of the base. She even just about gets away with manic laughter, never an easy thing to do.

The narrative works because it uses the personal experiences of the main characters to create something more sinister and therefore is much more inventive than the previous two parter `Bringers of Wonder`. Aided by some strong performances all round this is an episode that is more satisfying now than it perhaps was for younger viewers waiting for spaceships or monsters back in 1976.

Dicks presents this more like a mystery with suspects whose minds appear to be affected by Lambda waves. He appears to have made up the name for ESP abilities as in real science there are only alpha, beta, theta and delta waves but this is the sort of thing Terrance Dicks was good at, extrapolating from realism to fantasy convincingly enough for the viewer even if actual experts may groan. It’s also one of those episodes that shows us a little of the more ordinary routine of Alpha. Really you wonder why some people haven’t started behaving oddly by now even without an outside entity affecting them. Helena’s introduction always includes the number of days they’ve been away which by now amounts to about seven years! That recycled air must surely be getting a bit whiffy by now! 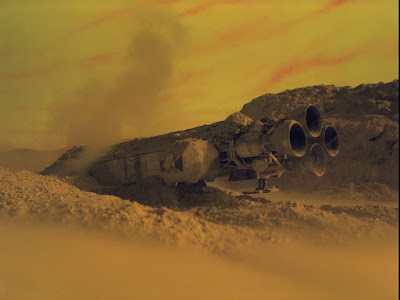 The Séance Spectre
Director Peter Medak and writer Donald James conjure up a whirlwind of an episode here which speeds along like a runaway train. The series is rarely quite as exciting as this encompassing a number of scenarios which might normally fill an entire episode on their own. We have an Eagle crashing on a desolate planet and having to be manually rescued, the command center taken over by a band of rebellious Alphans, an evacuation and for a finale Koenig having to blow up some of the nuclear dumps to push the moon off a collision course with that planet! All this in one episode!

There is a genuine excitement to proceedings from the off helped by a noisy, pushy Ken Hutchinson guesting as an engineer whose prolonged time spent on the lunar surface has convinced him that the hidden planet approaching is habitable and that Koenig and co are hiding the information. The actor commits himself to the role coming across as unhinged and aggressive which really improves matters. It is the case that the `illness` Sanderson is suffering from leads him to believe in what he supposedly learns during a séance. This bit doesn’t really match the action elsewhere and isn’t really necessary rather like the awkward title. Surely his isolation alone would just be enough to send him loopy?

All these jeopardy sequences are exited with suitable invention, enough for you not to groan and sharp editing means Medak’s dramatically framed action seems as sharp as the series ever got. He seems to get the best out of every member of the cast; it’s the worried looks and asides that help sell the situation. It is satisfying too that the script offers Helena’s medical views especially early on as others talk of “mutiny” she sees a sickness and so you get some disagreement amongst the command center crew over the best course of action.

Even when you know the characters will survive there is still a tension to the action, notably when Koenig and Sanderson fight right over where the nuclear trigger is counting down. The scale of the action leaves you even feeling alright over the surreal scenario of Maya turning into a plant to help create more oxygen! Why not?!

There should be more episodes like this one which offers non stop action from start to finish.