Adapted from a French graphic novel called Une Nuit de Pleine Lune (A Full Moon Night), The Owners is a crisp, compact and often tense film lasting less than ninety minutes without one minute of filler. In the Nineties four young people’s idea of ransacking the large country home of an elderly couple for rumoured hidden riches turns into a nightmare from which they may not escape alive!

In some ways this is a perfect story for current times being the ultimate lockdown nightmare – with the doors locked and a selection of tools and medical items at hand it’s a question as to whether anyone will survive. The film is not the first to flip the situation of young people terrorising old people around the other way but there is a persuasive quality to The Owners despite a high level of blood and extreme behaviour. I suspect that some pensioners might enjoy the results as the two old characters turn the tables on the youths for a change! If you see Gran reaching for the power tools, I’d make your excuses!

The action kicks in quite quickly which at first seems like a mis-step as we follow the younger characters into the house without much of a set up as to who they are. If the ideas are not exactly new, the narrative succeeds in revealing more about the group in a manner that feels natural rather than forced. It’s an odd film in some ways because none of the characters could be called sympathetic; Maisie Williams’ Mary is the closest we come to a heroine yet this is only because she’s the more reasonable of a decidedly dodgy group. Jake Curran uses his height and demeanour to initially appear to be the film’s antagonist- his actions quickly move from being the mouthy older guy to a frighteningly feral character. Terry meanwhile seems so frozen with fear by events that you imagine he’ll be the first to go but his character has some hidden angles that are teased out later allowing Andrew Ellis to shape a flawed but interesting person. The character you imagine is the lead Ian Kenny’s Nathan also has an unexpected plotline as matters develop.

Elderly people turning out to be creepily dangerous is not a new idea for the horror genre but the way the Huggins’ are written and played proves to be one of the movie’s trump cards. Even the name is somehow cosy and spooky at once. We’ve seen Sylvester McCoy as a different sort of Doctor and here he mines that charm and sends it in a completely different direction. Huggins uses the soothing platitudes of the medical profession whatever extreme act he is undertaking and the actor never over eggs it resulting in a convincingly disturbing performance. Neither actor nor director telegraph his real actions allowing for several scenes where you are taken by surprise. Rita Tushingham as his wife Ellen veers so well between apparent terror, playground malice and old age confusion. 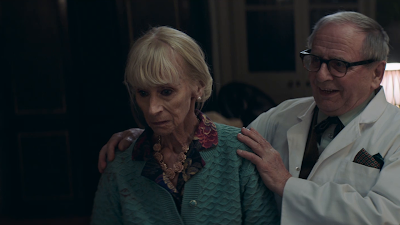 In these actors’ hands we are readily accepting of the more eyebrow raising antics because the film keeps its sense of humour however grim the situation gets. It’s a pity the producers chose the obvious title The Owners because it sort of gives away what would otherwise be a fantastic twist when we start to get the first hints the Hugginses are not the terrified old dears they initially appear to be.

As matters escalate so the performances heighten while the direction and sound amplify the rising tension. The film uses several effective tricks to underscore its more outre elements including a persistent throbbing sound effect that builds and builds along with the tension. When matters reach a climax the screen aspect reduces as if we are now all trapped in the dangerous claustrophobia. It is done so subtly in a very dark sequence that you don’t realise it’s happened at first. Excellent sound effects turn the predominantly wooden house into another character; every creak and groan amplified for maximum effect.

The plot twists should be experienced as you watch so I won’t spoil them here suffice to say each is true to the situation and you never feel as if you’ve been cheated. The ending is particularly satisfying if unexpected. It is true that the plot resembles others of this genre and its had mixed reviews but there is something captivating about The Owners despite a streak of cruelty that runs through it. As ever with a movie that thrives on unexpected turns the very end leaves some unanswered questions but not enough to take anything away from an accomplished absorbing watch.