Presented by Chris Arnsby [20] The Blow Monkeys: Digging Your Scene. “Good evening and welcome to this week's Top of the Pops,” at number twenty The Blow Monkeys Digging Your Scene.”FORMAT CHANGE KLAXON! We cut straight to The Blow Monkeys, with Mike Smith in voice-over, instead of the usual Quantel blur from the titles to the two Top of the Pops hosts. This is week two of the All-New Top of the Pops Show which is drip feeding its format tweeks rather than dropping them on the audience in one go. Michael Hurll was presumably afraid of the Max Headroom-style blipvert spontaneous combustion which would result from too concentrated a burst of Pop Power. Michael Hurll? Yes, the King o'er the water has returned after leaving Brian Whitehouse in charge for, ooh ages*. In actual fact he returned last week and I didn't notice, much to my embarrassment.
Michael Grade's big BBC1 relaunch is now just over one year old. Top of the Pops has settled at 7pm between the Regional News Magazines and Eastenders, and someone has suggested a few nips and tucks to keep Top of the Pops looking fresh in the second half of the eighties. Just to keep track, the changes so far are; daft new Top 40 Countdown format; only two breakers instead of three; closing the programme with a video instead of the audience dancing; and now a cut straight into the first song. It's a minor change but it works because it suggests a greater focus on music. Ironically the only thing these format tweeks can do is hint at change, because ultimately Top of the Pops is wedded to the hosts introducing studio performances and videos. It can't shift back to being exclusively studio performances because the audience also wants to see videos, but it also can't shift to just showing videos because they're promotional material and 30 minutes of videos would be too commercial for the BBC's remit. 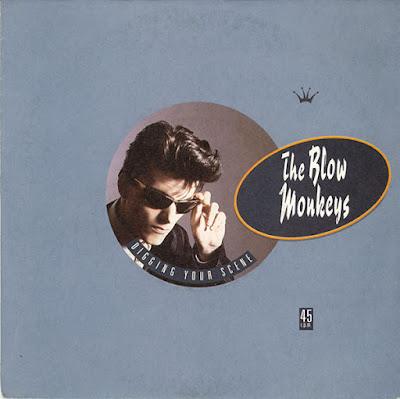 Michael Hurll is a canny producer and he knows the winds of change are blowing through the television world. MTV Europe is on the way (launching August 1987). ITV is planning The Roxy, it's Top of the Pops alternative which would launch in April 1987. Channel 4's The Tube has been catering to the more groovy pop crowd since 1982. And, more significantly, April 1986 sees Channel 4 launch the all video Chart Show. It's interesting to see that Channel 4 went for the cake-and-eat-it approach to music with one show focusing on live performances and the other on videos.
The Blow Monkeys are not a band who impinge on my memory in a big way. I remember the name and I vaguely recall a sort of mop-top Echo and the Bunnymen vibe. Let's see if I'm right.
Well, a little. The two lead singers are dressed in natty grey suits with extravagant quiffs, but I'm not sure why I associated them with Echo and the Bunnymen. The band want to look smooth but this is a rare occasion when Top of the Pops studio production ends up over-egging a performance. A long slow camera shot pulls back across the audience to reveal a beret-wearing saxophone player marooned on an island rostrum and the effect is silly rather than sophisticated.
Steve Wright: “Yes!! The Blow Monkeys!! And Digging Your Scene!! Good evening welcome to another exciting!! Top of the Pops with Mike Smith and me!!”
Mike Smith: “And lots of things happening tonight like the chart coming up with The Bangles in just a second and an awful lot of padded shoulders on the programme this evening as well. Here's The Bangles.” 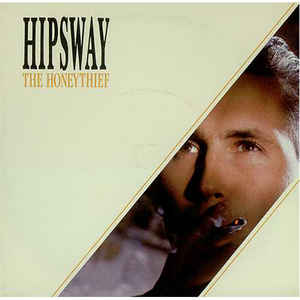 [22] Hipsway: The Honeythief. Stage right, halfway up the stairs to the stage, is a bloke in a blue jumper and white trousers. He stands out because he's above audience height and also because he looks a little out of place as he claps along awkwardly. Support for the band, a member of the production crew keeping an eye on the crowd, or just an audience member who is chancing their arm and making themselves more visible on telly? 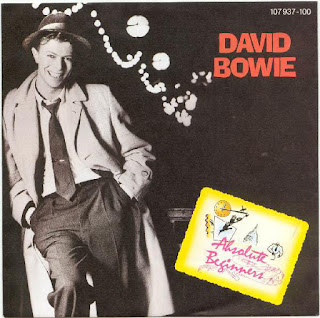 [26] Freddie Jackson: Rock Me Tonight (For Old Time’s Sake). Freddie's wearing jacket that's coloured white at the shoulders and V's down to black. The V of the colour change goes down the arms as well as the torso, and because the join is specked rather than smooth it looks as if he's been involved in some terrible accident with a bucket of paint. The jacket's also studded with rhinestone's so Michael Hurll breaks out the star filters to make the gems gleam in the studio light; it looks unbelievably cheesy but it fits the mood of the song.

Top 40 Breakers: [27] The Rolling Stones, Harlem Shuffle; [23] Howard Jones, No One is To Blame.
[17] Culture Club: Move Away. Wave goodbye to Culture Club. This is the first time they've appeared on Top of the Pops since December 1984 and it's the last time you'll see them. The next time Boy George appears on Top of the Pops in March 1987 he'll be going solo.
[1] Diana Ross, Chain Reaction. On video.
[13] Prince: Kiss. Janice Long and Simon Bates host next week.

Performance of the week: The Blow Monkeys, Digging Your Scene

*can't be bothered to check, sorry.