These days we’re used to the `season finale` in which various plots merge together and its all very dramatic. Back in the 70s tv wasn’t really like that- the only people who had conversations about story arcs were tv producers. Most episodic tv was made to be shown in any order so that whatever the peril everyone was fine by the end of the episode in time for some bantz and a jokey freeze frame. It does become a bit of a problem with a series like this. Consider- the half Moon has been juddering about the Galaxy now for 2,409 days according to the opening voiceover. In all that time and given all the adventures we’ve seen the place still looks spotless (we never see a cleaner), all the damage is repaired (where do they get the spare wall sections?) and the uniforms remain pristine (we never know where the laundry is). More importantly the psychological status of all concerned seems to be no more stressed than after a full day at the office. Sure someone occasionally has a meltdown (as happens in this episode) but it never lasts and only serves a plot point. It reminds me of the Star Trek Next Generation episode where someone changed into a different life form but three days later they were fine and back on duty! Really? So as we reach the end of our lunar trek it seems appropriate to point out how much better a series this would have been had the strains taken their toll both on the structures and the personnel. I’d love to have seen a stretch of corridor with a patchwork repair noticeable on it. Or some people no longer in uniform. Or Helena perhaps engaging in some counselling that involves talking about mental health rather than using some medical device that heals instantly. The aesthetic of the series is too clean in every respect. 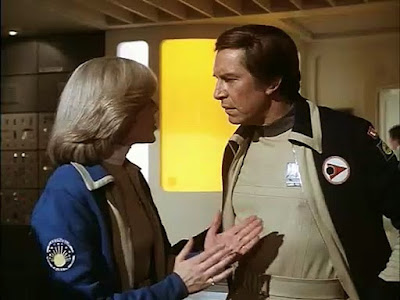 All that being said `The Dorcans` is a decent way of rounding off the show containing as it does a big threat that has Koenig forced to surrender after a short while. I suppose as it was the final episode they could afford to trash the sets a bit. The results are amongst the best this season has offered in that department- there’s one moment where a falling girder seems to cause genuine shock to the person it almost hits. When Space 1999 loses its sheen, when the danger seems real rather than neatly choreographed the results are more effective.

The episode does touch on continuity in a sense revealing the Dorcans- whose craft pummels Alpha into submission very effectively- to be enemies of the Psychons. Catherine Schell has done her absolute best with Maya, a character that often seemed out of place yet weirdly was operating as part of the command system after one episode. She has a moment where she implores her crew mates to kill her so as to prevent her being taken by the Dorcons who want her brain stems to make them immortal. When she begs for her own death she really means it and I was thinking how the series as a whole would have benefited more from this sort of drama.

Only melodrama awaits amongst the Dorcons who are one of those races sporting impractical robes and have a feudal dictatorship but a futuristic technology. It’s the old headstrong ambitious nephew trying to wrest power from the grizzled Uncle that forms the backbone of this plot and not even the normally reliable acting prowess of both Patrick Troughton and Gerry Sundquist can pitch it successfully. So it is that the acting honours go to Ann Fairbank who’s calculating Consul Varda is by turns menacing and also clever. With much of the episode on their spaceship it’s a showcase too for Martin Landau who is allowed one more run through Koenig’s defiance and stoic heroism. Its worth saying that without him- and also Barbara Bain- this season would have been much harder work for the viewer.

So that is that. The show was not renewed for a third season and the Moon trundled on through the Universe. This second season is clearly a notch below the first but as Fred Frieberger himself said neither was a massive ratings hit and despite its sometimes silly appearance I’m glad there actually is a second season. Most people who’d seen them preferred the first including Martin Landau himself.

You might imagine he would be dismissive of the series in general however it seems he was not. In an interview with MJ Simpson twenty five years later the actor was generous about the show despite his many prestigious acting gigs since. “It was a valiant effort,” he said, “It’s not easy to do that kind of a show on a weekly basis, and I also think that our special effects at the time were really amazing. If you look back they still hold up very well…some of the stories of course were not as dramatic or a little lacking, but some of them were excellent little movies. Comparing it to Star Trek as many did he added; “We didn’t intend to be Star Trek. It was a differently textured show, and there were episodes that I would proudly screen for anybody. I just think it was time well spent and we did some very, very interesting work at that point in time.”

It is best to think of Space 1999 as a thrill ride and not linger too much on anything deeper. The first season certainly has episodes that are amongst the best telefantasy of the era and even the second contains some hidden treasure. One thing though has niggled me all the way through this watch. Whenever we see a face on a screen or comlock the background is not where they actually are so I’m thinking- of course, they could change the screen background on Alpha just like we can on Zoom!You see sometimes the series was ahead of its time... 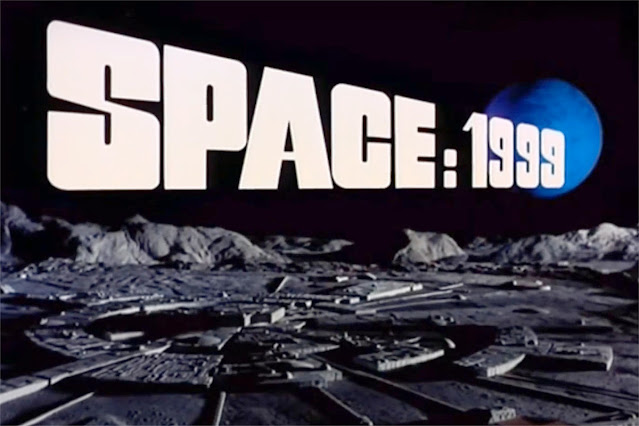