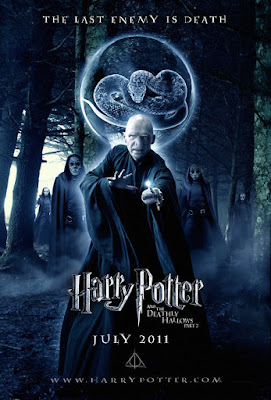 Ten years back when I first wrote about Harry Potter it was the phenomenon rather than the books I was interested in. Like many adults I’d never heard of the boy wizard until the news media started relating tales of midnight openings, huge crowds of people and immense anticipation over the release of the new book in the series (probably the fourth one at that point?). Having assumed that kids had forsaken books for electronic concerns this intrigued me, especially when I started noticing grownups reading it as well. Something was going on. Not too long after that the films started and the whole world knew about Harry P. It all seemed- and remains- a curious parallel world supposedly set in present day yet devoid of anything like mobile phones, computers, or even non English people. Could today’s multi cultural, technological world really be interested in such a thing?
The answer appears to be Yes. A decade on from the point where most of us first encountered the series, the second part of the seventh book, Harry Potter and the Deathly Hallows Part 2 (phew!) arrives on the very big IMAX screen in 3D. It is almost too weighty- in content and culturally- to be able to assess with a question as simple as Is it any good? It certainly cannot be discussed without giving away the plot so if you are one of the 18 people who doesn’t know how, as the poster gravely says “it all ends” then don’t click on to the rest of the review..
Read more »
Posted by John Connors at 19:28 No comments:

It’s telling that Christopher Eccleston’s comments this week that he was planning to sue News International as his phone had been hacked went unreported by many media outlets. Instead it was his comments on why he left Doctor Who after just one season that made the headlines. He said; “I left..because I could not get along with the senior people. I left because of politics. I did not see eye to eye with them. My face didn’t fit and I’m sure they were glad to see the back of me.”
It would seem he is referring to directors and, some people reckon, producers Phil Collinson and Julie Gardner as he makes specific reference to being told how to play the part. He also mentions an incident involving a director bullying a props man on set. "You can go, 'Yeah, yeah. That doesn't matter. That director can bully that prop man and I won't say anything about it'. But then when that director comes to you and says, 'I think you should play it like this', you've surely got to go, 'How can I respect you, when you behave like that?'"
﻿

Email ThisBlogThis!Share to TwitterShare to FacebookShare to Pinterest
Labels: Christopher Eccleston, Doctor Who

"Something very wonderful and strange..." 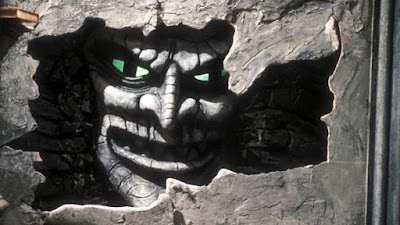 Doctor Who – The Awakening,  recently released on dvd
Words: John Connors
There is something absolutely brilliant about `The Awakening` yet it is also one of those `what if` stories. Whilst the idea is probably not enough to sustain a four parter, a third episode would certainly avoid the climactic scramble in which the Malus is rather too easily seen off. There are rich characters that would benefit from more screen time, certainly enough to ensure they don’t just end up as a crowd running after the Doctor.
Read more »
Posted by John Connors at 19:08 No comments:

Email ThisBlogThis!Share to TwitterShare to FacebookShare to Pinterest
Labels: Doctor Who, The Awakening, The Malus

There’s a revolution going on in the publishing industry
Say you have a brilliant idea for a story and you decide to write a book? What are the realistic chances of getting published? Given that it took even JK Rowling a decade to do so, the chances seem rather slim. Unless you are famous already of course in which case the publishing industry will be fighting for your offering regardless of its literary worth.
The established way things have worked for decades is that to be published you need a literary agent who will then attempt to sell your work to a publisher. Some writers approach publishers directly on the basis that if they are interested an agent would be quite easy to convince. What literary agents generally request is some form of synopsis and the first three chapters. The reality however is that they will either not even read your submission properly or they will read it but decide you are not worth taking a risk on. Some now say they have enough clients and can’t take on anyone else.
Read more »
Posted by John Connors at 19:15 No comments:

Doctor Who- Frontios, out now on dvd
Reviewed by John Connors
One of the attributes of pre 2005 Doctor Who we can be overly critical of is the fact that shooting on sharp video can make even the best constructed sets look a bit cheap, a bit fake. Recently I watched one of this year’s episodes on someone else’s HD tv and whether due to a fault at the BBC’s end or ours, the picture occasionally reverted to looking untreated. That is to say for a few fleeting seconds, I was watching it  without the filmic sheen the series now has. And guess what? Yep, it looked as false as any old episode might. So it just goes to show that if someone had the money, technology and time to give old stories like `Frontios` the film treatment they would look fine.
﻿﻿

Why Leonardo is the best children’s TV drama in years
Words: John Newman
There are some things that tend to be overlooked about TV drama made for children. One is that it is written by adults. Secondly, it has so many more restrictions- both artistic and financial- than adult TV drama. Thirdly being able to produce something that will captivate lively minds is a challenge that requires a special skill. A programme produced within such confines is therefore liable to be of a high quality.

This spring, CBBC debuted Leonardo, produced by Kindle Entertainment. Running for 13 episodes, Leonardo is set in 1467and imagines a Florence where the young Leonardo da Vinci (Jonathan Bailey) is working as an artist’s apprentice but is also an inventor. His best friend is Mac, real name  Machiavelli (Akemnji Ndifornyen), who is streetwise and devious. Then there’s Lorenzo (Colin Ryan) heir to the powerful Medici dynasty but secretly mates with Leo and Mac, sneaking away from his pampered life. The first episode `Anything is Possible` introduces Lisa (Flora Spencer-Longhurst) into the group. Though she is destined to one day be the subject of the most famous painting in the world when we meet her she is desperately trying to become an apprentice by disguising herself as a boy called Tomaso. Even then she still needs a letter of recommendation which Lorenzo’s father Piero de Medici (Alastair McGowan) is ready to give her, providing she steals Leonardo’s notebook which contains plans for a number of his inventions.  De Medici has ambitions of power unknown to his son.
Read more »
Posted by John Connors at 19:34 1 comment:

Emperor and Galilean @ Olivier Theatre, London
Reviewed by John Newman
Set between 351 and 363 AD Emperor and Galilean concerns the Roman ruler Julian the Apostate and his attempts to revert the empire to pagan religion. Originally written as a two part ten hour epic by Henrik Ibsen which premiered in 1896 it has rarely been performed since and never staged in the UK. That is until this summer when Ben Power’s lean three hour twenty minute long adaptation was staged at the NT Olivier Theatre. Ibsen subtitled the work “ a World- Historical Play” and it is described by American academic Toril Moi as raising “the question of whether human beings have the power to shape history or whether history has a will of its own” . Ibsen described it as his most important work yet it is probably his least known.
Read more »
Posted by John Connors at 19:00 No comments: