Reviewed by Chris Arnsby 11/09/86 . Mike Smith. “Evening. Welcome to the BBC Club. Crammed in here tonight we've got Cutting Crew, Jermaine Stewart, we've also got The Psychedelic Furs, and hold on tight because here comes Sam Fox.”
[26] Samantha Fox: Hold On Tight.  The new (old) format holds true. Once again we start the new (old) way with Mike Smith talking to camera to introduce the first act. Stanley Appel is tonight's holder of the Produced & Directed by credit and he is presumably not allowed to make changes to the sacred format while Michael Hurll is in absentia. What does Stanley Appel do when he's not keeping Michael Hurll's seat warm? Not a lot according to BBC Genome. He's listed as Producer on Blankety Blank, currently in it's Les Dawson incarnation, and that's it. Blankety Blank and the occasional Top of the Pops. That seems like a cushy job. This week Blankety Blank even has a Top of the Pops crossover with Bruno Brookes as one of the panellists; along with Fred Trueman, Nerys Hughes, Derek Jameson (ugh), Eve Ferret (no idea), and Sara Hollamby (ditto). (John- According to her website she’s “a very experienced television presenter” who did Crackerjack and Wish You Were Here. Eve Ferret is an actress who was in Absolute Beginners). Sam Fox's song is no better than her previous diet Kim Wilde efforts but it at least sounds different. It's more of a rockabilly/hoe down affair. This is the last time we'll see Sam in 1986, but she'll be back in 1987. And 1989. So we've got that to look forwards to. 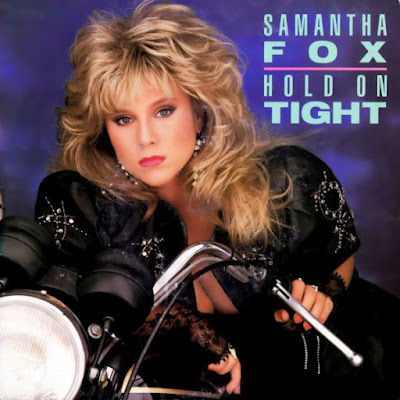 When a giant spider walked round Liverpool...

Dateline 2008. Something is lurking on the drab exterior of a derelict city centre office…something very large and something that has eight legs. It has appeared overnight to startle early morning commuters already battling with high winds and lashing rain. Emerging from the train station below they can only gasp at the sight above their heads and in seconds mobile phones and cameras are clicking, people are talking, local radio and tv reporters are hovering about. On first glance the object appears to be some sort of Victorian era or steam punk machine made of metal with the appearance of a spider; sat on the side of the office block it seems to have no purpose and puzzles onlookers. There had been word of a unique piece of street theatre that would debut a couple of days later- was this part of it or something else? The more people gawp, the more obvious it became that this whatever-it-was is no machine and no abstract creation either but a creature that demands to be brought to life like some fugitive from a Tim Burton movie. It’s huge as well; even semi curled across several floors of the building in a shape that suggests it will crawl down any moment. Hey, didn’t it just move a fraction? Nah, that was the wind. Are you sure…. 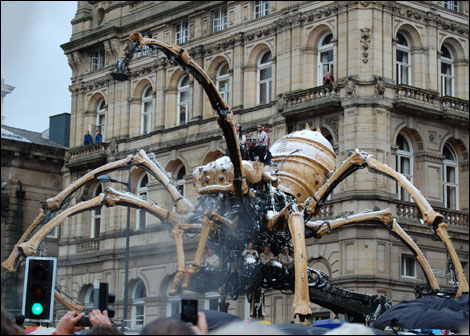 DOUBLE BILL! Reviewed by Chris Arnsby. 28 August:
[6] Jermaine Stewart: We Don't Have To... Janice Long. “Hello and welcome to a live edition of Top of the Pops, and here at number six it's Jermaine Stewart and We Don't Have To Take Our Clothes Off.” Brian Whitehouse likes to begin with a big dramatic camera move across the studio. In fact, since he returned from holiday on 14/08/1986 he's repeated the same move on a weekly basis. The camera crane is raised to capture the audience on one of the scaffolding bridges, then it moves down and under the bridge and zooms across the studio floor towards the main stage. At least that's what it says on the camera script. This week something goes a little wrong and the camera ploughs (gently) into the back of one of the audience. Either the crane failed to lift up and over the heads of the audience, which is what happened on the previous two shows, or Floor Manager Cliff Pinnock was distracted and unable to shove the dancers out of the way in time. Oh well, that's all part of the fun of live television. 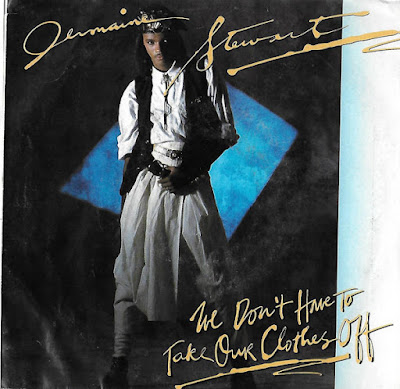 Shang Chi and the Legend of the Ten Rings review

An efficient new entry to the burgeoning Marvel Cinematic Universe, Shang Chi and the Legend of the Ten Rings is thankfully not nearly as impenetrably mythic as its title suggests. In a sharp two hours it manages to stay grounded while at the same time providing plenty of mystical material plus some tub thumping action sequences. While there is a pattern to Marvel’s introductory films that this one sticks to, there is enough new ground to make it worthwhile even if the subject area is not as fresh as, say Black Panther or even Iron Man. Like the latter non  Marvel enthusiasts may never have heard of Shang Chi (I hadn’t) but just as we were all that time ago with Tony Stark we’re glad to have shared his story. 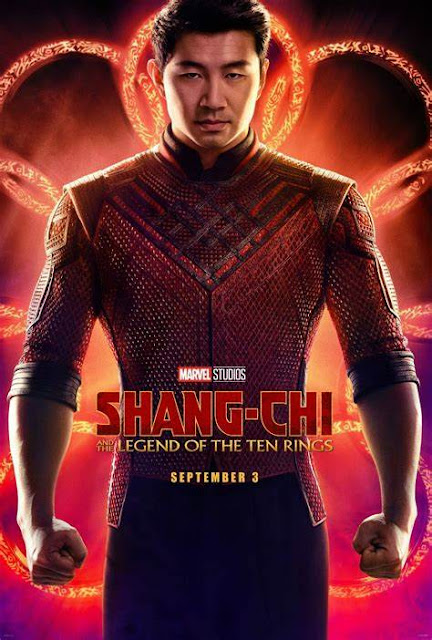 SPOILERS AFTER THE BREAK!

For a decade Air Studios was the go-to place for some of the world’s top rock stars to record. Situated on the remote Caribbean island of Montserrat it was founded by producer George Martin in 1979 as a spin off from his Air London studios. Over the next decade it birthed some of the Eighties’ biggest albums and was used amongst others by The Police, Duran Duran, The Rolling Stones, Dire Straits, Paul McCartney, Jimmy Buffet, Earth Wind and Fire and Elton John. It was a markedly different environment to the city bound or even countryside studios most of these artists were used to. Gracie Otto’s involving film includes anecdotes both from those who recorded there and also the people who lived there many of whom worked at the studios. It’s a great documentary reflecting the laid back atmosphere that made the studio such a favourite destination.

Presented by Chris Arnsby. [25] Depeche Mode: A Question Of Time. Bruno Brookes. “Hello, good evening and welcome to Top of the Pops.” Gary Davies. “And here to start us off with a question of time it's Depeche Mode.” Lighting Director Derek Slee is conducting an experiment. How many spinning lights can he jam into a confined space before Brian Whitehouse tells him to stop being silly? Derek gets up to twelve; that's two globes hanging from the ceiling; four pairs of rotating lights at the front of the stage; and two spinning light poles at the back. Not counting, of course, the usual studio lights, and a myriad of flashing mini-strobes which have been packed into the scenery at the back. It's possible the scream from the studio audience is not excitement but an involuntary electrical spasm caused by induction from the massive electromagnetic field in the studio.