In cinemas now
written & directed by Joel and Ethan Coen

Set in the Greenwich Village folk scene in 1961 Inside Llewyn Davis shows us an unlucky and fruitless week in the life of a singer whose refusal to compromise his ideals in exchange for commercial opportunities has seemingly condemned him to an endless ritual of playing his morbid songs to the same crowd each week at the small Gaslight Club. In between he crashes on people’s sofas and usually ends up annoying them forcing him to move on. There are several routes you imagine the narrative to take and pleasingly it opens out into something like a road movie albeit one that offers no real reward for its protagonist, unlike the viewer who comes away richer.

Kid Jensen. "What ever your music taste you should find it covered tonight on this week's edition of Top of the Pops!"
Chart music: Chaka Khan: I’m Every Woman [14]

Email ThisBlogThis!Share to TwitterShare to FacebookShare to Pinterest
Labels: BBC, Top of the Pops 79, TV

There is no doubt that 12 Years a Slave is a harrowing film that even with our knowledge of acting and effects makes for uncomfortable viewing. It must have been harder to act it but I suppose the rigours that some of the cast had to go through is nothing compared to what the slaves in the story endure. Based on true events the film is set in the mid -1800s where free family man Solomon Northup is tricked into accompanying two supposed entertainers to Washington where he is promised earnings way in excess of the norm for his violin skills. However the men get him drunk and sell him to a slaver. Solomon wakes the following morning in a bare brick walled cell chained to the floor. Thus begins a dozen years of mistreatment and abuse as he is hauled around several owners. 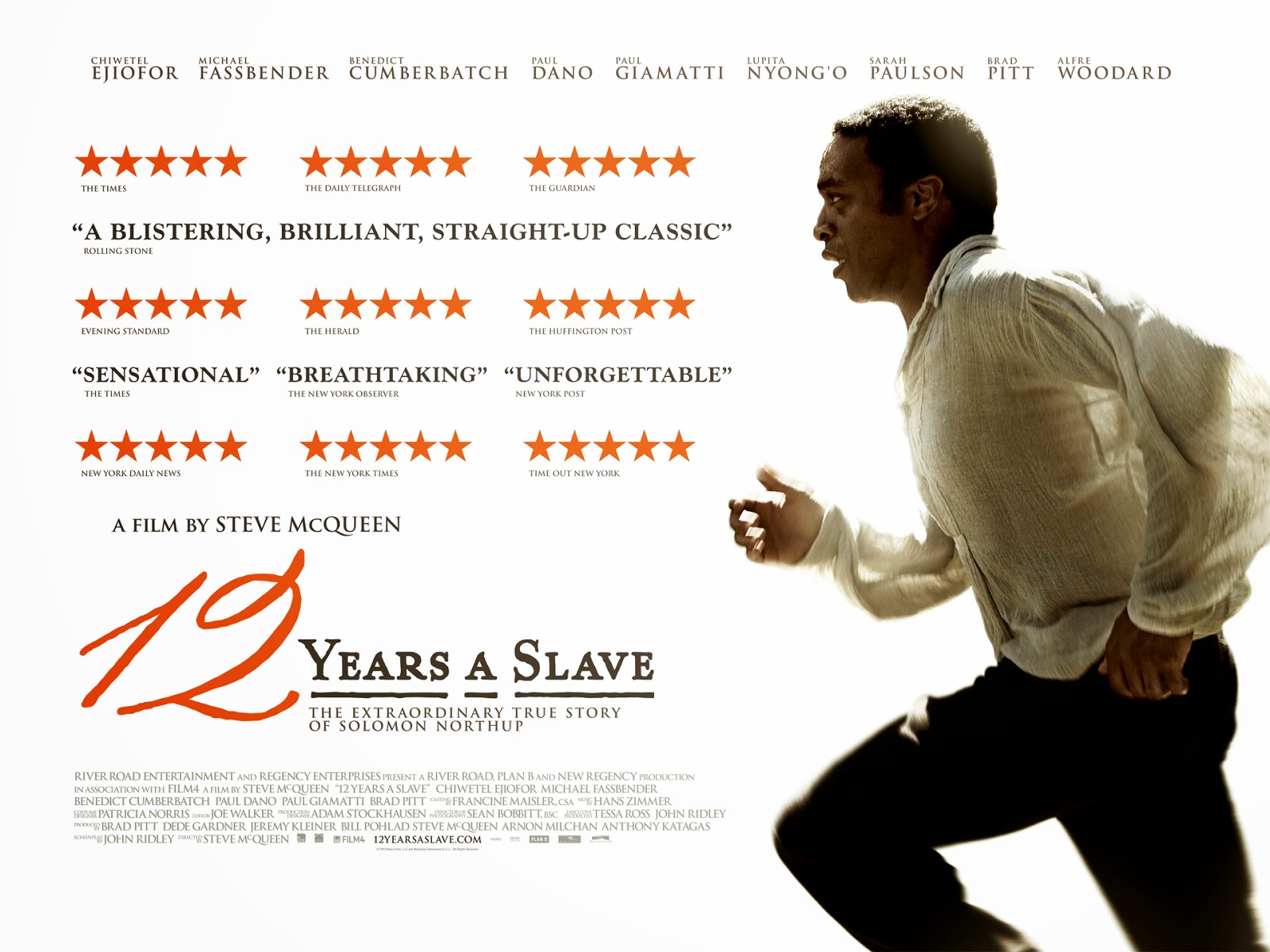 Issue 3 of the Doctor Who fanzine Plaything of Sutekh is now available. 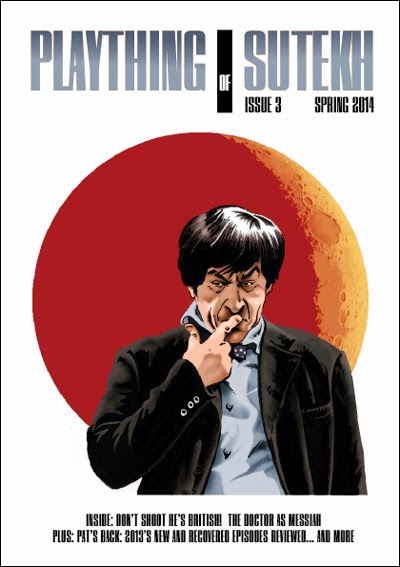 Messiah! - Greg Bartlem looks at the changing depiction of the Doctor in the post-2005 series
Seasonal Gear Changes - Jez Strickley spots similarities between Terror of the Zygons and The Seeds of Doom.
Pat's Back - Were they worth the wait? A look at the two recently recovered Troughtons.
Secret Who - underrated stories Enlightenment and The Invisible Enemy
Plus
a new angle on stories recently released on DVD The Tenth Planet and The Mind of Evil and more

To order, please send a Paypal payment (via paypal.co.uk or paypal.com to
playthingofsutekh@mail.com


Please add your address in the notes section. You can also pay by cheque - please drop us an email for the payee details.
Price £2.40 - please add postage below.

Plaything of Sutekh is a non-profit publication.

Email ThisBlogThis!Share to TwitterShare to FacebookShare to Pinterest
Labels: Doctor Who, Doctor Who fanzine, Issue 3, Plaything of Sutekh

Mr Selfridge versus The Musketeers!

ITV / BBC Sundays @ 9pm from 19/01/14
The Sunday evening drama clash of swords and silk ends in victory for D’Artangian and co but both shows shine.

Imagine! Here come the Musketeers fearlessly striding down the streets, swords at the ready and round the other corner is Mr Selfridge who has nothing but his shouting, beard and millinery to fight with. Yet hold on; he’s actually had Agnes build a false wall into which the Musketeers walk, causing them to fall over whereupon the store’s staff charge armed with tape measures. Only they don’t know that the Musketeers actually carry muskets (is that where the moniker comes from?) and they mow down the enormous hat wearing army. It’s a tempting thought to imagine the loudest entrepreneur of the early 1900s doing battle with the 1600’s finest swordsmen but these two shows are clashing in an old fashioned scheduling way. Nowadays of course we can watch both but which would you choose if you could only have one?

Q, Ron Weasley, Mr Bates and Merlin get together – but someone else steals the show!

Not for the linguistically squeamish, Mojo is a play that rattles along at 200mph, characters barely catching their breath and sometimes even talking over each other. Jez Butterworth’s tale of seedy criminality in the summer of 1958 on the cusp of the rock and roll revolution is superficially macho. An all male cast of characters are boastfully riotous yet as matters proceed the artifice is lifted to reveal a bunch of scared, insecure people not necessarily ready to protect each other when things get tough. And they do get tough because before we’ve even met the manager of Ezra’s Atlantic club he has been cut in two.

I'm back after a short break for Doctor Who's 50th anniversary and then Christmas. What's changed? Top of the Pops is now on BBC4 in high definition and the difference in picture quality is amazing. New presenter Mike Read joined back in November 1978 which means the 1980s are approaching and there's nothing any of us can do about it. Soon we'll have Margaret Thatcher, Swap Shop replaced with Saturday Superstore, fear of nuclear war, the banning of We All Stand Together by Paul McCartney & The Frog Chorus (for containing the lyrics "bum bum bum bum bum bum"), and ZX Spectrums. Also several years of Grange Hill will leave me terrified of going to Big School but that's another story. Let's rock!
BBC4: Top of the Pops 1979
Mike Read. "Welcome to the 15th anniversary edition of Top of the Pops and we're looking forwards to some great music in 1979."
Chart music: Paul Evans: Hello, This Is Joanie (The Telephone Answering Machine Song) [24]

Generation X: King Rocker [NEW] Billy Idol's wearing an iron cross. I wonder if anyone complained? The audience aren't any more lively in 1979 but a couple of them pogo furiously when they realise the camera is on them.

The reason people liked Sherlock from the start was because it didn’t conform to our expectations. Now it’s established and is not conforming to our new expectations some people are critical as if they have forgotten why they liked the show in the first place. So perhaps after the previous two episodes these critics will feel on safer ground with `His Last Vow`. That is at least until it spins around once, twice and at the very end a third time to once again confirm this is not a series to easily be pinned down.

This episode skates very close to the edge of being self-indulgent and may baffle some casual viewers whom you can imagine are sitting there thinking `what’s going on?` The answer is the show’s first full comedy episode and why not? After all Sherlock is, as the character himself suggests, a ridiculous man and suits the comedic riffs of this freewheeling script co-authored by all three of the series’ writers. The results do follow on from the more human Sherlock last week’s episode unveiled and just as that was a platform for Martin Freeman, this week its Benedict Cumberbatch’s show. In a tour de force of a best man speech, interrupted by flashbacks, the great detective gets to the nub of more down to earth mysteries such as marriage and friendship as well as trying to solve a case.
Read more »
Posted by John Connors at 19:53 No comments:

Atlantis Touched By The Gods

The biggest problem with the same production team’s Merlin was their inability to develop the narrative quickly enough. All too often drastic scenarios were reversed and the status quo restored and while this may be preferable when it comes to overseas sales it does render the end product rather dry and repetitive. To be fair, Merlin did advance across five series but it was very sluggish. Atlantis has the advantage of being a far broader scenario with a huge swathe of established and imagined mythology to mine and no legend (apart from it sinking which you’d presume won’t happen till the final episode!) in particular to stick to. The first season has already played fast and loose with different strands of myth to some effect and has also established a more natural rapport between its leading characters. There have been flashes of storytelling genius but rather too much sloth. This two part finale seems to be an attempt to re-calibrate the show and while sometimes choosing the obvious it makes for a dependable though not quite surprising end.

Just how good is this? Two years after Sherlock faked his own death and ignited a debate as to how he did it comes the revelation. We knew, of course, that he wasn’t dead because we saw him at the end of the last series but the question that has been debated right up until this episode was broadcast is how they did it. By which I mean how did the character do it and how did the television programme stage it? Brilliantly, both of these notions are addressed in a script that may just be the best thing Mark Gatiss has ever written and that’s saying something. Bristling with vigour, thrills and wit, `The Empty Hearse` is a ceaseless joy to watch from start to finish as it twists and turns through several developments. As for that explanation- well, just for fun you get several options during the course of the episode until the real one is revealed by Sherlock himself near the end. Or is it?