Review by Chris Arnsby. Janice Long: “Hello and welcome to Top of the Pops. Tonight we've got Mel and Kim, we've got A-Ha, we've got Erasure, we've got Al Jarreau.” Gary Davies: “But before all that we start off with a mega-band at number twenty seven, from Liverpool, here are the Christians.”

[27] Christians: Forgotten Town. Top of the Pops treatment of this song is odd. This is Forgotten Town's fourth week in the Top 40 and it's finally granted a performance the same week that it's a non-mover at [27]. What's that all about? If anything, I'd expect the band to be featured the week the song broke into the Top 30. Interestingly, looking back at the line up for that week (19/02/1987) Top of the Pops featured an unprecedented four Breakers. Did a previous booking for The Christians fall through? We'll never know, but I'm determined to whip this up into some sort of conspiracy theory. 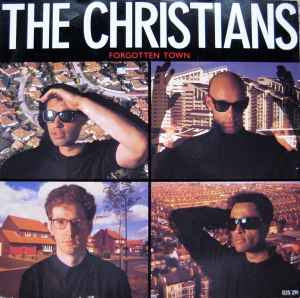 A bitty episode that only gains traction in the final ten minutes, `The Gladiators` sees our team once again in Canada this time on the trail of a KGB agent called Karl Sminsky who may be behind the disappearance of a number of Western operatives. Played with stoic Russian determination by Louis Zorick, Minsky is super trained in disciplined martial arts to the point that he can stop bullets with his hands. Yes, it’s one of those slightly tedious training based plots in which a group of bulky muscle men are put through rigorous tests to find the best. These sequences are almost comically straight faced as the assembled beefy blokes are clearly not actors. They alternate with the Avengers chasing about somewhat randomly for clues allowing us to take in the Canadian scenary. Add to this the preposterous idea that a top secret security organisation would have an open day (even Steed questions the logic of this) and you have a storyline that neither engages nor convinces. 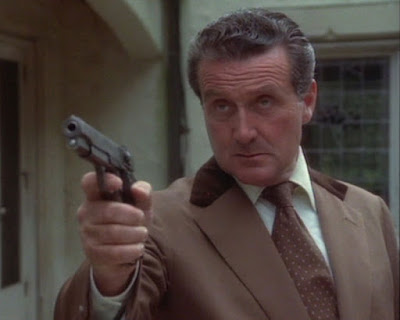 19/02/87: Gary Davies: “Hi how ya doin'? Welcome to another mega Top of the Pops. Tonight we have an excellent show for you. In the studio we have Eric Clapton, Curiosity Killed The Cat, also Man 2 Man Meets Man Parish, but first we start with a band who've just released their first single. It's the highest new entry in the chart this week. Here's Westworld and Sonic Boom Boy.”

[22] Westworld: Sonic Boom Boy. For some reason I keep getting this song mixed up with Love Missile F1-11 by Sigue Sigue Sputnik. There must be some vague similarity that my brain keeps locking on to, although obviously the key difference is that Sonic Boom Boy isn't rubbish. Top of the Pops are confused. The opening caption calls the band Westworld. The closing one calls them West World. Which is it? Christine Buttner is credited as Graphic Designer this week (I assume she handles the captions), and when the charts roll round she plumps for Westworld again, so I'm going to take that as correct. 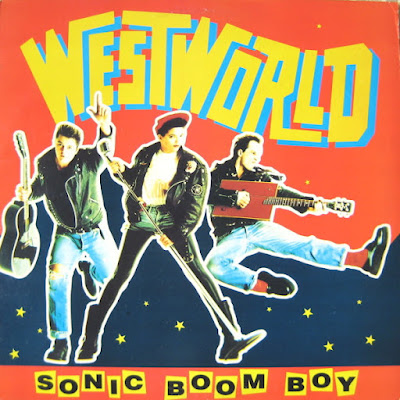 A re-make and a prequel- but do they work??

The original West Side Story is considered iconic enough to have been left alone for sixty years but a Steven Spielberg movie is always worth seeing and he’s expressed such admiration for that 1961 film that he must have a good reason to create a new version of it. Some people had their doubts, but I think he’s done a fine job. Any flaws are inherited from the original if not from Romeo and Juliet itself -  notably the unlikely event of two such hostile communities meeting up for a dance and the fact that all the events take place in just two days. He keeps to the same plot with a few alterations and also adds a more dramatic style that the 1961 version lacked. Crucially those killer songs are in place and you can’t go far wrong with them. 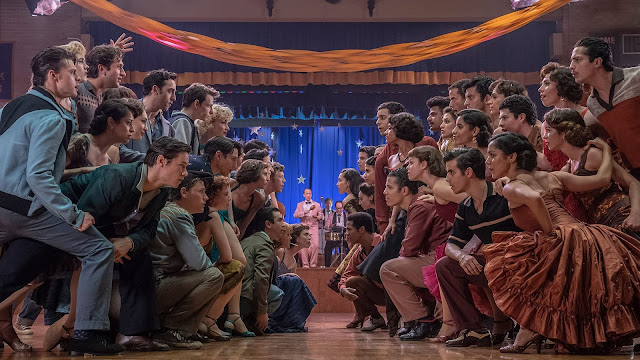 One would imagine that, afforded the luxury of being the series’ only two parter, would mean a complex plot too knotty to deal with in forty seven minutes. `K Is For Kill` Part One; `The Tiger Wakes` however has less plot in it than an average episode with a supposed mystery that even the slowest viewer would work out before the combined intelligence of the Avengers and a French police inspector manage. It would be a little less straightforward were it not for a prologue set in Tibet which drops a line that a hermit who appears to be in his thirties is actually decades older. Laying it on we then see a young Russian soldier attacking a seemingly isolated garage in the Sixties only to be found minutes later having aged decades. We’ve pretty much got it by now but the point is further laboured by attacks happening in 1977 in France. So the trio hightail it the French countryside for an episode of dodging bullets and scratching heads clearly unable to hear millions of viewers explaining what is happening. 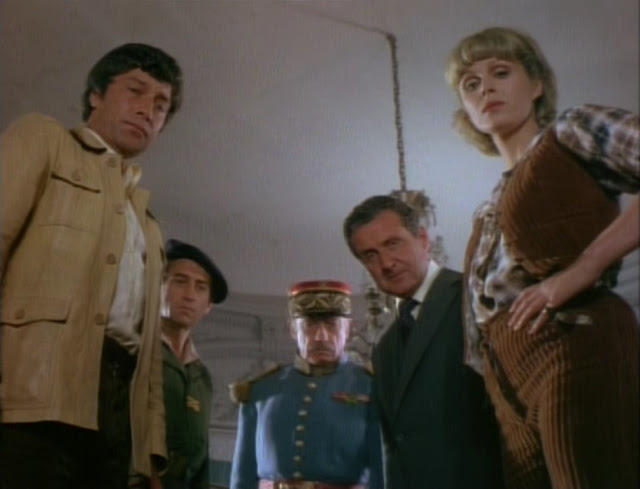 Three things to say from the outset about The Batman. Though it lasts for three hours you don’t get any sense of time dragging because everything unfolds as it needs to. Second, this is not the umpteenth re-telling of the Batman origin story so don’t imagine you’ve seen it all before. Matt Reeves' film throws new light on aspects of that story and on some familiar characters but I never got the impression this was old ground being trod once too often. Thirdly- and most importantly- there is no silly gravelly Batman voice! 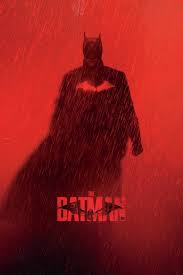 King of the Castle

Bob and Dave couldn’t be more ordinary names for a couple of tv writers who dreamt up some extraordinary concepts in a number of Seventies Doctor Who stories (including inventing K9) and in some of their own children’s series.  King of the Castle is a seven part serial produced by HTV snd shown in 1977. It was one of several keynote productions ostensibly produced for kids though with a broader appeal such as Sky, Raven and Children of the Stones. It may though be the most bizarre of them all- “Kafka for kids” is how Bob Baker himself summarised it acknowledging Franz Kafka’s story The Castle as an influence. Uncommitted viewers may find the heightened scenarios too chaotic to appreciate but the serial was nominated for a BAFTA. Originally meant to be shown on weeknights, transmission was delayed until a slightly later Sunday slot could be found presumably to ensure that parents could keep an eye on it. There are certainly some moments that would disturb younger or more sensitive children especially in the first two episodes. 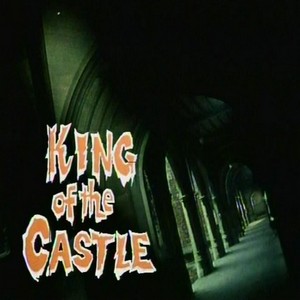 Reviewed by Chris Arnsby. Simon Mayo: “Welcome, this is Top of the Pops and the twelve hundredth edition as well. Fantastic line up including Five Star and Pepsi and Shirlie.” Peter Powell: “And for openers! A band who have a triple-platinum album called World Machine! Starting on a nationwide tour in March and on Top of the Pops tonight! Level 42!

It's just under a year since Simon Mayo was first paraded in front of the Top Of the Pops audience, 20/03/1986 edition. He's still the Radio One newbug -and still mainly the holiday relief DJ- but he's becoming more prominent and about two weeks away from his first go in the Breakfast Show seat; the week of 2 March. His presence here seems more languid and low key than you'd normally expect from a Top of the Pops host but you need to remember three key facts.

1) He's standing next to Peter Powell who radiates enthusiasm at a level toxic to small mammals and tomato plants.

2) This is Simon Mayo's second go at hosting a full programme.

3) He's midway through two weeks of standing in for the never seen Adrian John, who hosts the very early in the morning show which starts at the ungodly hour of 5.30am. Adrian John is not to be confused with Adrian Juste. 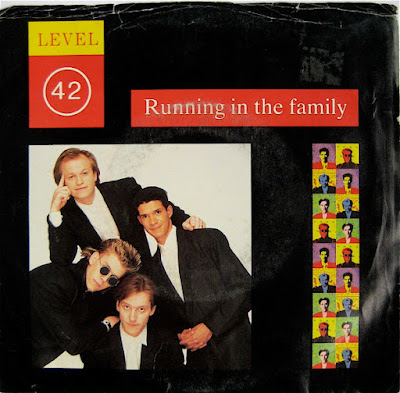 A health farm that is killing people is the premise of `Angels of Death`, the title pertaining to the staff of attractive models who work there yet are also handy with guns and karate. After a number of senior officials die of natural causes, Steed and co are looking for a link between them. Amusingly the victims we see are all with Steed when they pop their clogs so technically he is a link but the viewer knows they’ve recently had a spell at a health farm., Here they are subjected to hallucinogenic injections, a hectic disco session with the girls and spiked drinks followed by a spell in a maze. Though they seem fine the following day any sight of the maze map triggers a fatal reaction as it gives them the ultimate stress. 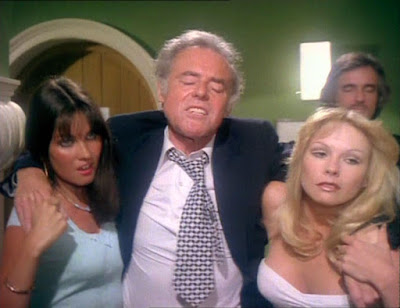