2 eps for 1 reviewed by Chris Arnsby. 9 May: Janice Long: “Hello. Welcome to a live Top of the Pops. I'm auntie Janice.” John Peel: “And I'm uncle John. And we're going to play you some songs from the hit parade. Aren't we Janice?” Janice Long: “They're smashing, like The Style Council and Walls Come Tumbling Down.”
[13] The Style Council: Walls Come Tumbling Down. “You don't have to take this crap!” Tone it down a bit Paul. Knock off the casual swearing or we'll lose the audience. Or maybe that's the plan. BBC2 is showing The Moonraker (1958) against Top of the Pops. Perhaps the schedulers are hoping casual viewers will switch over, thinking it to be Moonraker (1979). (John- I’d have thought the opposite would be true!) 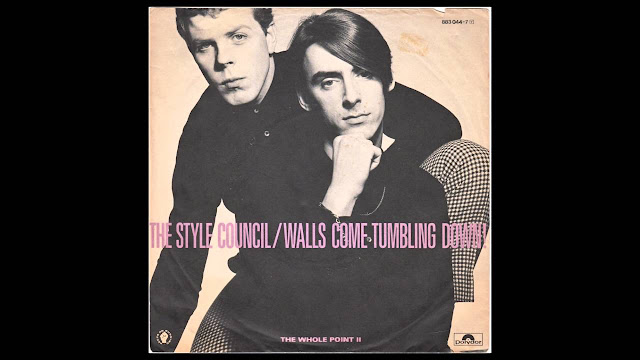 From the TWU Archive Pods, part 2 of this 2004 appreciation of Spaced. Words- Sean Alexander. Episode 1: Back
In which Daisy returns from Asia to find changes at home…and the interest of two familiar ‘agents’.
Between series one and two of Spaced, an important cultural change took place.  A generation of fans raised on the original Star Wars trilogy had - like Simon Pegg himself - seen The Phantom Menace and decided, once and all, that George Lucas was just a great fake who’d got lucky three times. Actually, two great cultural changes had taken place: The Matrix, released the same summer as The Phantom Menace, had become the most successful and influential piece of pop-culture since Star Wars. So into this cultural miasma arrives the second series of Spaced.  And it’s hard not to dissociate these changes in nerd culture from the resultant opening half-hour of the show’s sophomore year.  There’s no denying it’s back with a bang: refreshed, revitalised and freshly engorged by the ever-expanding media landscape on which its original success was hewn.  Spaced no longer just makes do with cannibalising every film and TV show going; it now has its own cultural heritage to draw on.  Not bad for a show only one year old!  What’s so good about ‘Back’ is how easily it slips into the old routine - with even a voice-over refreshing for first-time viewers - without seeming staid as a result.  Into this is mixed a poignant discourse on the fear and isolation of losing touch with one’s domestic familiarity.  Daisy, absent for six months, returns to a world familiar yet strange on her return from the far east, not least of which is her replacement in Tim’s immediate sphere by new flatmate Mike.  That the episode ends with things - largely - back to normal is as much a relief to the watching viewer as it is to Daisy herself. 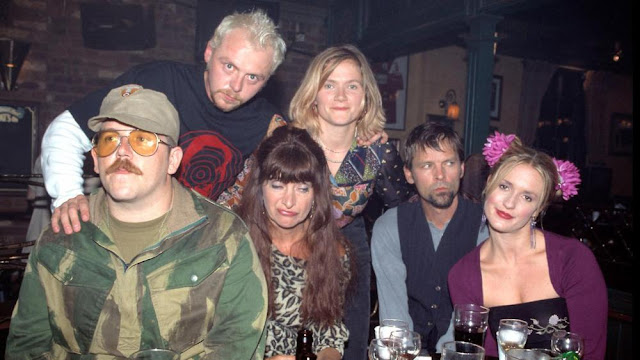 Reviewed by Chris Arnsby. Richard Skinner: “What a show we've got for you. We've got Chris Rea, New Model Army, U2, Paul as well, and you.” Mike Smith: “And a lot of noisy people as well. Seven new chart entries this week for you. So lots to come tonight, plus this lot, first time since Christmas 1983. Would I tell a lie? Welcome Eurythmics.” [25] Eurythmics: Would I Lie To You? Eurythmics. You know Eurythmics right? Two of them. A dour lady and bloke who always wears sunglasses indoors. Lots of parping synthesisers and attitude. Well this week Eurythmics have been replaced by the pod people. Everyone is smiling. No one is wearing sunglasses. There are about 4000 people on stage. It's hard to get an exact count because the studio's all smokey and atmospheric, and everyone keeps moving around and... what's the word I don't associate with Eurythmics? Dancing... that's it everyone keeps dancing and being all happy.
I'm possibly overstating how much of a change of direction this is for Eurythmics but it comes as a surprise when you compare it to their last single, Sex Crime (1984). 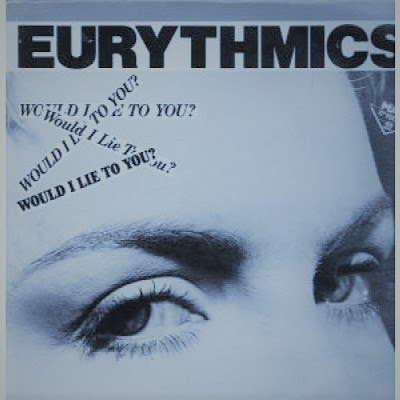 From the TWU archives, Sean Alexander looks at the series Spaced. First published in the print zine in (gasp) 2004.
British TV comedy experienced something of a renaissance in the late Nineties.  Reeves and Mortimer, Alan Partridge and The League of Gentleman have all left a rich legacy for future historians to analyse and deconstruct in years to come.  But arguably even the overwhelming success of ‘modern’ sitcom The Office papers over today’s comedies’ credentials for inheriting the classic sitcom mantle.  Because the nineties were when sitcoms grew up, becoming more comedy drama than broad situational farces.  The evidence of The Vicar of Dibley’s sole inclusion underlines this.  While comedy, by nature, has always run a fine line between the funny and the sad, modern shows like Little Britain and Nighty Night are continuing the nineties trend for tragic comedy.  However, there was one sitcom made in the past five years that did uphold the cosy traditions of halcyon days.  With a twist.  It depicted an eclectic group of friends and their struggles to find happiness and meaning in an increasingly hostile world.  But it added a post-modern, pop-culturally obsessive and occasionally surreal style to its familiar template.
Its name? Spaced. It ran on Channel 4 for two series between 1999 and 2001.  Written by comedians Simon Pegg (previously best known for the slightly dark and twisted sketch show Big Train) and Jessica Stevenson (hitherto the downtrodden - and eternally weight-conscious - Cheryl in The Royle Family) it tells the story of twenty-somethings Tim Bisley and Daisy Steiner’s attempts to find purpose and fulfilment in the occasionally scary world of pre-Millennium North London.  Posing as a ‘professional’ couple, they are joined in their illicit co-habitation by a variety of colourful housemates.  There is their landlady, Marsha, a woman for whom the pursuit of the opposite sex is matched only by her capacity for a bottle of red or three.  Downstairs is tortured artist Brian, forever carrying the pain - and the paint - of his endeavours on his sinewy torso.  Elsewhere, Mike is Tim’s gun-loving, ex-territorial army best friend, as likely to bring some small arms to any house party as any beverage.  While Daisy’s best friend, Twist - with her lisping voice and day-glo ensembles - is as terminally vacuous as she is self-absorbed. 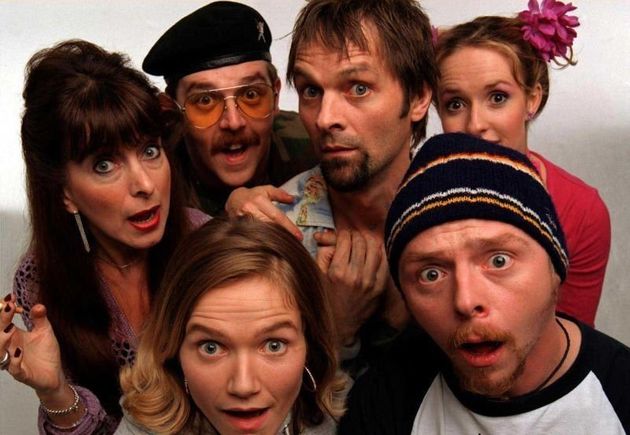 Viewed from this distance the success of Slade in the early Seventies seems unlikely yet a series of hit singles, several of which topped the UK charts, made them the period’s top homegrown pop act. Unlike their peers they never tried to be cool or distant, in fact their appeal was partly based on likeability. They were four ordinary blokes from the Midlands whose catchy, if repetitive songs, struck a chord. They saw their chance and donned glam rock sequins with enthusiasm even if their stage wear sometimes looked like it was run up the previous night on a sewing machine. By 1975 however their appeal was waning and they would subsequently make one of the classic UK pop star errors by going off to try and make it big in the United States at the expense of their established British audience. Before that though they made a film. 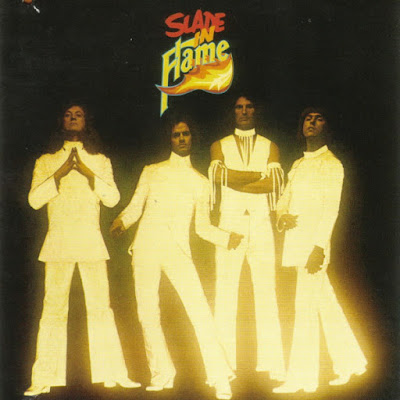 Reviewed by Chris Arnsby. Mike Read: “Hi, and welcome to Top of the Pops with Gary and myself. USA for Africa are on tonight, and the RAH Band, David Grant, Jaki Graham, and also Phil Collins.” Gary Davies: “In fact if you want to know how to get 17 hits in 33 minutes just stick around. To get us underway a song that's gone up 17 places to number 7 in the charts this week. Bronski Beat and Marc Almond, I Feel Love.”
[7] Bronski Beat & Marc Almond: I Feel Love.17 hits in 33 minutes? Yes, it turns out Top of the Pops has been given extra time. When Only Fools And Horses finished, Top of the Pops and Tomorrow's World swapped places on Thursday. Now Tomorrow's World has lost five minutes and is scheduled from 7.30-7.55pm, and Top of the Pops slots in between that and repeats of The Lenny Henry Show at 8.30pm. 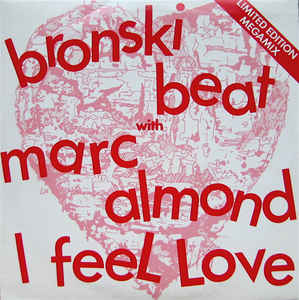 I Feel Love is a study in contrasting performance styles.  Jimmy Somerville is a natural on stage. He dances like a club veteran and looks at home and completely unselfconscious. Marc Almond looks more awkward, and dances like... well, like me. Fair play to Marc. He's doing his best but he's got the wry self-conscious smirk of a man out of his element. Clearly he would rather be back in suburbia writing poetry about how ghastly it is to live in the suffocating bourgeois embrace of the provinces where no one understands him, and all his real talents go unappreciated. Marc Almond is wearing a small gold star pinned to his blazer lapel. Is it his badge for mathematical excellence? This is an oddly structured song with two false endings, put there to frustrate any DJ with the temerity to play the song on the radio. The first one shifts abruptly from I Feel Love to Johnny Remember Me. The pair continue to sing as Lighting Director Fred Wright uses this moment to cut the main studio lights leaving the stage lit by a spotlight, against a backdrop of neon tubes. The studio lights are then slowly raised again as the song builds. It looks great. Both false endings get big cheers from the studio audience.

You could probably fashion a film around most things provided you can create some form of excitement and interest. So if the obtaining of a driving licence may seem too trivial a topic to turn into an interesting film Licence to Drive proves otherwise.  A lively narrative manages to explore every option this subject might suggest while also sticking to the tried and tested tropes of the US high school movie. The first half in particular - as sixteen year old Les Anderson takes his test and things go wrong - is incident packed and amusing in a sort of Eighties way. Apparently John Hughes was initially attached to the movie though it eventually enabled Greg Beeman, nowadays a well- known American TV producer, to make his feature film debut. 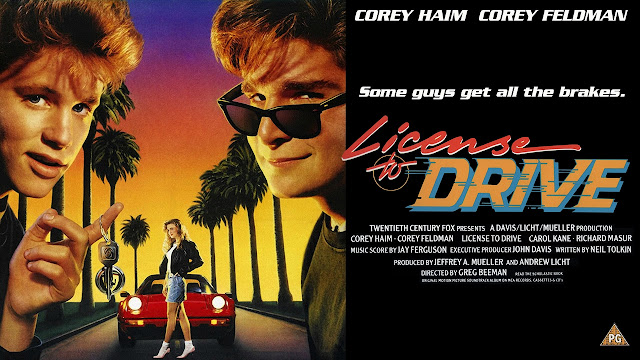 Nougat!? Even the name is tricky. Is it pronounced “noo-gaa” or “noo-gatt”? It is a substance that can be difficult to make ending up either too soft or, more likely, too hard. Some nougat resembles the sort of material used on white washed walls and can have a similar consistency. Yet it endures, one of those foods that people generally love or loathe like Marmite or sprouts.  Still if you can’t manage to chew or even cut it, nougat can make a handy table leveller if you’ve an uneven floor. 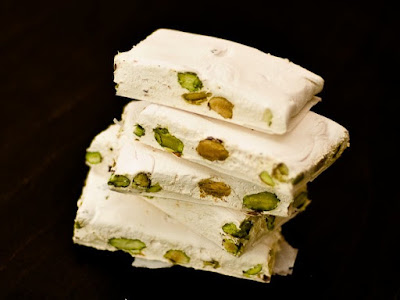