Season Three Episode 13- Terminal
(1980) Writer: Terry Nation / Director: Mary Ridge
Avon takes the Liberator on a private mission refusing to tell the others either its purpose or destination. Their journey causes a potentially catastrophic effect on the Liberator and brings them to the supposedly long destroyed man made planet Terminal.
Originally supposed to be the last ever episode `Terminal` is packed with incident (perhaps a little too much) and reaches a suitable ending that could easily have left viewers speculating indefinitely. As it happened there was another season after all but it still works as a `how will they get out of that one` cliffhanger. Terry Nation’s ideasometer is working overtime to introduce us to a strange space phenomena, a man made planet and, almost casually, the future of man’s evolution.
﻿
Read more »
Posted by John Connors at 15:33 No comments:

The return of The Sweeney

An inventively shot reinterpretation of the iconic TV show The Sweeney is let down by some odd creative decisions
Can we believe the behaviour exhibited by the Flying Squad in this film would really be allowed to happen? They operate using much the same tactics as the criminals they are pursuing and will go on a raid armed with baseball bats. While such operational methods may have had some basis in truth in the 1970s it highly unlikely they do now. Just as unlikely, in fact, as the squad operating out of a high rise swish modern office block. If you want to be ready to react to crimes, does it make any sense to be about ten floors above ground and have to wait for a lift before going out to pummel drug dealers? Nick Love’s big screen version of The Sweeney is full of such anomalies. A lot of it does not ring true- so why is it so watchable? 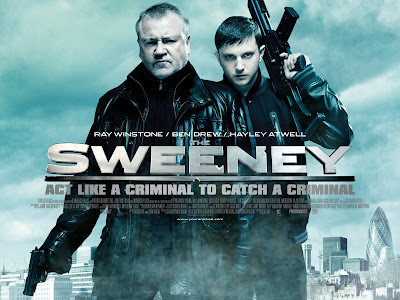 Email ThisBlogThis!Share to TwitterShare to FacebookShare to Pinterest
Labels: Film, The Sweeney

`The Power of Three` is a nostalgic trip back five years.
Watching `The Power of Three` it is as if the clock has been turned back four or five years to the heyday of Russell T Davies’ Earth invasions. There’s faux news coverage, scenes of something alien in familiar locations, celebrity cameos, UNIT and the impact of what is happening being shown from a domestic point of view. In this case though the house belongs to Amy and Rory and we experience the unusual scenario of the Doctor tagging along with them instead of the other way round. Perhaps the fact that he moved in last season and the one before with Craig makes it seem a little less unusual, but the episode turns the Doctor into more of a fish out of water than ever. 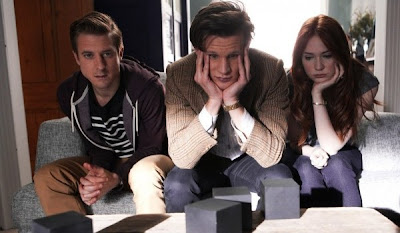 Email ThisBlogThis!Share to TwitterShare to FacebookShare to Pinterest
Labels: Doctor Who, The Power of Three, TV 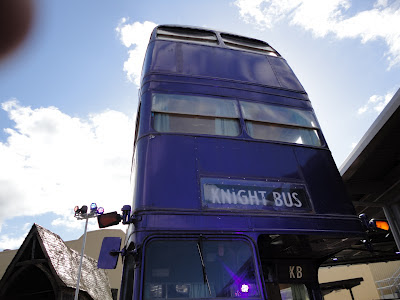 SEASON PREMIERE
LEONARDO Season 2
`Illusion,` a double length episode introduces the second season of one of the best children’s dramas of recent times. By its nature Leonardo has to be inventive because placing one of history’s most creative people in the midst of runaround adventures set in his youth does not seem a natural fit. Yet the first season proved it does fit and indeed was a triumph of ingenuity. The series is not telefantasy or historically accurate, neither is it a straightforward adventure. Filmed in South Africa to replicate the sunny climes of 15th century Florence, It is in a category of its own and recalls the halcyon days of children’s drama when formulas were kicked against. Yet even the most avid followers of the series might wonder how a further season can sustain given the limitations of the series’ format and indeed locale. Wonder no more because, against the odds, Leonardo has pulled it out of the hat again!

Seeking the “ultimate entertainment” advertised, the Liberator crew find themselves embroiled in the machinations of a war between two races that is decided by single champions, one of whom is Tarrant’s brother.
Chris Boucher always seems to get the best out of the series and `Death-Watch` is another example of his skill in doing so. It does hinge on one unlikely contrivance though which turns out to be less necessary than you’d think. Donning a wig, Steven Pacey plays Tarrant’s older and more suave brother Deeta who for reasons unexplained is the champion of one of two races, Teal and Vandor, who decide their wars via a televised combat for two; “war without destruction” as someone puts it. It’s like The Hunger Games with adults, in fact it seems that book mined the same inspiration as Boucher as this is something of an established sci-fi cliché. For the most part Boucher handles it well, choosing to focus as much on the procedure and build up as he does the actual conflict.
﻿
Read more »
Posted by John Connors at 19:36 No comments:

We're off to see the Wizards

Harry Potter Studio Tour Scrapbook part 1
If you’ve ever wondered what butterbeer might taste like or just how big the great hall at Hogwarts is then you should book to go on Warner Bros Harry Potter studio tour. Located in Leavesden about an hour out of London lie the studios where much of the Octology (that’s eight films apparently) was shot. In three hours or so you can soak up the world that JK Rowling so vividly invented and which was so richly detailed in the movies. It’s remarkable how much has been preserved; in fact it’s doubtful if anything was thrown away. From early sketches to scale models to complete sets, props, vehicles and even buildings a great swathe of the Potter films is here. The tour is divided across two soundstages with a back lot open air area in between.
Doused in studio lights and packed with informative extras on screens or via a nifty digital guide- plus very helpful staff- the tour is well worth taking if you like the films. There’s something for people of all ages and barely enough time to take it all in.  There’s even a shop at the end and you will feel compelled to buy something to remind you of your trip. So this is my personal two part scrapbook of just some of the many things you can find.. 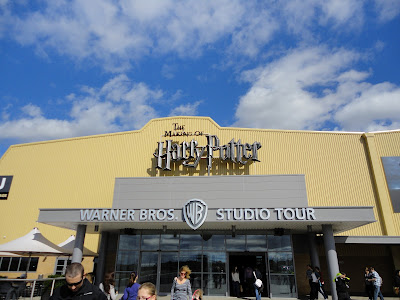 More than just a sci-fi Western, `A Town Called Mercy` asks some awkward questions of the Doctor.
An eloquent, thoughtful fusion of traditional Westerns with some moral quandaries, `A Town Called Mercy` works on a less energised level than the first two episodes. Toby Whithouse is no stranger to the very human dilemmas the Doctor faces here and as his own series Being Human shows, he isn’t afraid to pause the action and wise cracking for something else. In that respect- and despite the Doctor talking to a horse- this is a more adult orientated episode than either of its predecessors. 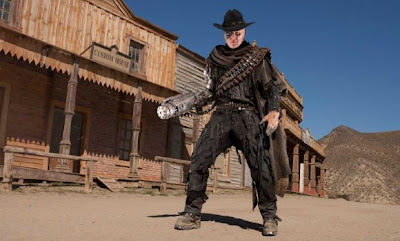 Yep, there sure are some spoilers if you go past here, pardner

Email ThisBlogThis!Share to TwitterShare to FacebookShare to Pinterest
Labels: A Town Called Mercy, Doctor Who, TV

Season Three Episode 11- Moloch
(1980) Writer: Ben Steed / Director: Vere Lorrimer
The Liberator follows Servalan beyond the edge of Federation space where they discover a planet with a secret.

Of course it’s not as exciting as it sounds. The secret at first appears to be that they’ve invented a cabinet but it turns out the planet, Sardos, is run by a super computer that can copy anything including living matter. A rogue bunch of Federation troops have commandeered the whole place and subdued its inhabitants. It’s difficult to know where to start with an episode which is by turns dull or embarrassing and lacks even the unintentional amusement that `Ultraworld` and its giant loaf provided. This is played strictly seriously and that makes it worse.
﻿
Read more »
Posted by John Connors at 19:29 No comments:

Review In A Blog

`Dinosaurs On A Spaceship` is just as much fun as it sounds.
Handed the title to do with as he wished (and which the budget allows), Chris Chibnall delivers his best Doctor Who episode to date. A while back his episode `42` made much of its real time setting; the adventure would unfold in just 42 minutes. `Dinosaurs On A Spaceship` seems if anything even faster. It appears to pack more into its 42 minutes than `42` does. And it’s got dinosaurs. On a spaceship. Just the way Matt Smith says it perfectly captures the mood being evoked here. It’s fun, frantic, fannish and frivolous. 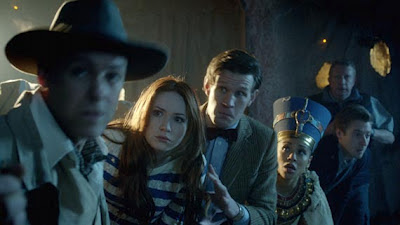 Email ThisBlogThis!Share to TwitterShare to FacebookShare to Pinterest
Labels: Dinosaurs on a Spaceship, Doctor Who, TV

If you were to watch one segment of this episode with the sound turned down you might think it was some bizarre version of The Great British Bake Off. An army of lookalike chefs are loading people onto a conveyer belt that runs into a large oven to help create a giant crusty loaf.  Perhaps this image burned itself into the minds of dance group The Orb who in 1989 released an ambient track called ` A Huge Ever Growing Pulsating Brain That Rules from the Centre of the Ultraworld `.  It certainly made the episode more renowned than many. So is `Ultraworld` actually any good if you try to take it seriously?
﻿

Hal David was called a lyricist but really he was a writer, perhaps even a poet. His words encompassed topics with the ease of prose and they sound just as strong written down on paper as they do when sung. During an imperial period in the 1960s he complemented Burt Bacharach’s astonishing melodies and their keynote songs remain untouchable classics.
Read more »
Posted by John Connors at 19:00 No comments:

The return of Doctor Who has plenty of surprises...
It was Russell T Davies whose version of Doctor Who was heavily influenced by American television yet it is now Steven Moffat’s era that is embracing that look and feel even more. This is the first of five episodes framed like TV Movies whose purpose at least partly appears to play to non UK audiences. Big, broad scenarios, location filming in the States and Spain and a sense of spectacle are all part of this season and to emphasise the point each episode has a movie style poster to go with it. Just as the Doctor himself is seeking to go underground, so the show is trying to make more of an international splash than ever. Question is- does it work?
﻿ ﻿
Read more »
Posted by John Connors at 19:12 2 comments: