Presented by Chris Arnsby. 17 July: [14] Steve Winwood: Higher Love. Mike Smith. “Good evening and welcome to Top of the Pops from Television Centre in London. Let's start this week's show with a man at number fourteen in the charts. It's Steve Winwood and Higher Love”.

This Mike Smith show went unrepeated on BBC4 because of his never resolved contract dispute with the BBC. It's an off-air recorded in 1986 and it hasn't gone through the modern photosensitive epilepsy compliance process. Maybe I was tired when I watched this episode but it felt particularly hard on the eyes. Steve Winwood appears on the main Top of the Pops stage; the one with the hideous new (ish) neon logo to stage left. The space behind this stage is where the Floor Manager sometimes arranges Cheerleaders but on this occasion they've been replaced by a couple of spinning light poles. When the light poles shine directly into the camera the entire picture whites out and the abrupt change in contrast from the normal dark, smokey studio is noticeable.

I don't recall previous Mike Smith episodes being this squint-inducing. Maybe the studio is a bit darker than usual, or there's more smoke, or maybe this episode has been encoded differently; who knows. It's the first time I've noticed and been grateful for the process which reduces the contrast of the BBC4 repeats. I don't normally need to watch Top of the Pops with a paracetamol chaser. It turns out my nan was right. Too much telly really is bad for my eyes. 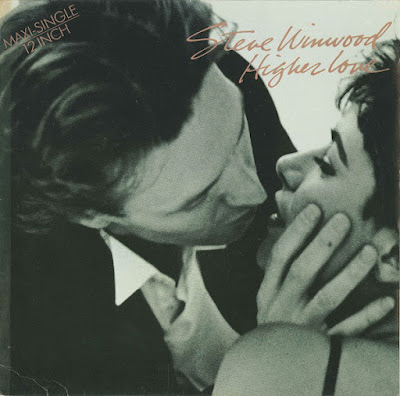 Reviewed by Chris Arnsby. [16] Midnight Star: Headlines. Simon Bates. “Welcome to studio six at Television Centre and this week's Top of the Pops. Let's kick off with Midnight Star and Headlines.” There's the faint sound of studio chatter in the gap between the end of The Wizard and Simon Bates' introduction. It's a woman issuing instructions to the studio but, alas extensive digital audio forensic work is unable to clarify what is being said. The Floor Manager this week is Iain McLean, so it's not him. It must be someone firing up the Cheerleaders who is also standing close enough to Simon Bates for his microphone to pick up the sound. What sort of orders do you have to issue to the Cheerleaders? “Smile and dance like your lives depend on it.”

Midnight Star are a seven piece American group. What makes them notable? They have three keytar players who all appear to be wearing suits made out of pattered wallpaper. 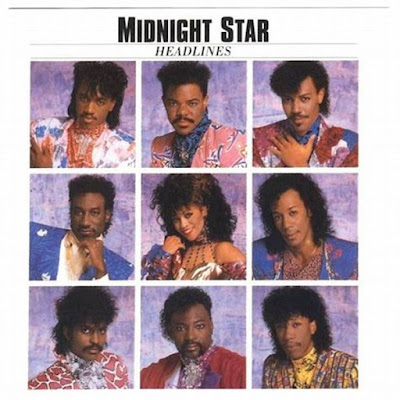 Introduced by Chris Arnsby. [3] The Housemartins: Happy Hour. Janice Long. “Hello and welcome to Top of the Pops and here, in the studio, at number three with Happy Hour. It is, The Housemartins.” London 0, Hull 4 is written on the front of Hugh Whitaker's drum kit (a sneaky bit of promotion for their album), and he's rooted around in his wardrobe to find a 1984 model FRANKIE SAYS ARM THE UNEMPLOYED t-shirt. There's more sneaky promotion for fellow Go! Discs artist Billy Bragg who makes it on to Top of the Pops, sort of. Stan Cullimore's t-shirt features the cover of Levi Stubbs', Tears Bragg's new single.

Down at the front, the audience are waving THE HOUSEMARTINS banners. Last spotted back in December 1983 when they were issued to the crowd for Slades' performance of Me Oh My, although those banners had SLADE printed on them obviously. What are the logistics of this? Are they paid for by Top of the Pops or the record company? The SLADE banners were pretty crummy, thin strips of plastic with SLADE printed only on one side. These are a much higher quality. Double-sided printing, and solid enough that the text on the far side doesn't bleed through; unlike the one-sided SLADE banners which caught the light and made it look like the audience had been issued with banners that read EDALS (but mirrored). 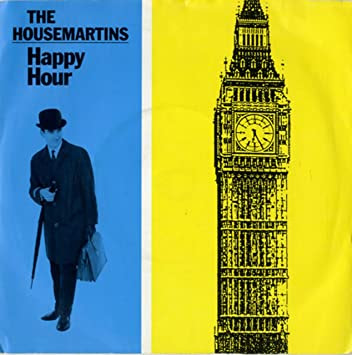 There have been some unlikely disguises Turpin has appropriated but this one takes the biscuit! In an episode that revels in its farcical premise, he ends up dressing up as the sister of Gluttons’ solicitor Gooch. Sophinista Gooch has herself been requisitioned by Sir John to pretend to be his wife during the visit of his fearsome godmother the Duchess of Durham. Turpin is unaware of this of course so when he locks up the Goochs during a raid on their house to obtain documents relating to fraudulent land deals Sir John’s henchmen turn up expecting Sophinista to go with them. Thus by a turn of events that stretches credulity to it’s absolute limit Turpin ends up dressed as the woman on his way to pretend to be Lady Glutton! At this point the hi jinks are a bit wearing but to my surprise once everyone is in place we are in for a frantic perfectly performed pantomime that is actually funny. Thanks to comedic timing par excellence from all concerned and a willingness to indulge in playfulness the story actually works. 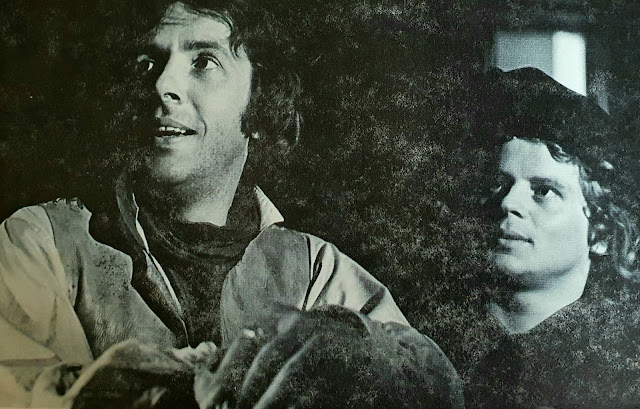 In which Turpin himself assumes the role of thief taker in order to catch…Turpin! There’s a lot of fun to be had in an episode which shows just how easily in these days someone could assume an identity. It’s a trick Richard Carpenter seems to enjoy and this time after Lord Faversham is robbed by the highwayman and offers a substantial reward for Turpin’s capture, the latter and Swiftnick assume the roles of Jeremiah Snare and Jonathan Handy. They offer to deliver Turpin and then set up an operation to frame Captain Spiker. I wondered where he’d got to and it’s great to see David Daker yelling again, especially at the end when he is carted away by Faversham who assumes he is Turpin. 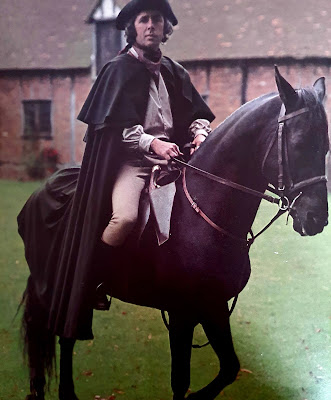 Yes, with a barrage of ripe language and pacy action season two opens up with a two part story allowing the extra space several episodes last season could have done with to draw us further into the story. Picking up from the same point as last season ended with Dick and Swiftnick’s direction of travel decided upon by the toss of a coin the duo are en route to London when an old mate of Dick’s called Joe Cutler turns up mortally injured. Before he dies, he entrusts a key to be given to a woman though neglects to say who or where she may be though does mention “the devil’s chimney” and someone called Manderfell. Moments after he’s died a troupe of well dressed riders capture the duo and take them to the country seat of the very same Lord Manderfell. Played with icy relish by Donald Pickering, he appears about to let them go before tricking Swiftnick into answering his name whereupon their disguise is rumbled. 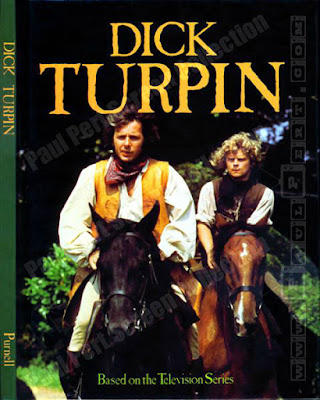 It’s been a while. My first cinema trip of 2021 is to see a film completed nearly two years ago. During the past sixteen months the entire rhythm of the Marvel Cinematic Universe has been disrupted to some extent and the real question I asked myself before seeing Black Widow was this- would this sort of film be as enjoyable now we’ve lived through a proper worldwide crisis for the first time in most of our lives? Do we want kinetic violence, things exploding, peril and potential world threatening events? Turns out we do! Black Widow is a good re-introduction to this type of cinema especially for those like me who’ve not seen the recent Marvel tv series. It’s a very well composed movie with those individualistic flourishes that Marvel do so well so as to differentiate each branch of the franchise. There is the expected peril- and its definitely not mild- the heart pulsing action scenes and plenty of tech yet crucially the film has a heart that makes it worth your while. And you can take your facemask off too which allows you to breathe more easily during some palpating moments! 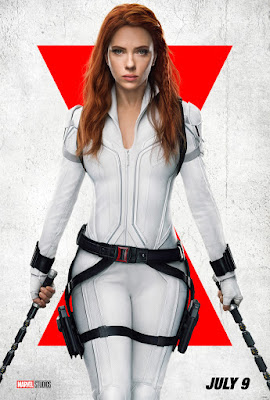 Warning- Major spoilers beyond this point.

Reviewed by Chris Arnsby. [15] Bananarama: Venus. Mike Smith, “Welcome to London and a star-studded edition of Top of the Pops. Coming up later we've got Wham! in the studio and the new Madonna video. Let's start with the ladies who've come back from Los Angeles, Bananarama!” Bananarama are on the pentagram decorated Beelzebub stage, but Visual Effects Designer Guy Lunn obscures the offending symbols with dry ice. 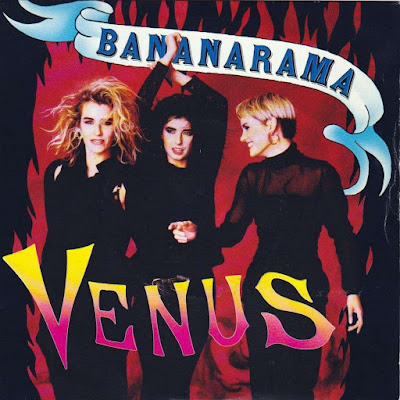 Email ThisBlogThis!Share to TwitterShare to FacebookShare to Pinterest
Labels: #TOTP, Music, Top of the Pops 1986, TV

I’ve decided to write this post about a series I only have very distant, foggy memories of and which does not exist in the public domain unless you live in Australia or have access to the archives of York University! The first episode is on YouTube – probably copied somehow from the Aussie release- which is some help though why the person who uploaded couldn’t have done the others I don’t know. The series is about writing. In fact it’s called Don’t Forget To Write` and it is its content which apparently caused it to be shunted off to a shady late evening slot in which it was destined not to be remembered. So is it that writing about writing is boring for anyone who doesn’t write? Or is it that creatives don’t enjoy seeing their foibles on display? How much information can I find about this obscure programme? Whatever happened, the series was once in the `Financial Times' TV critic's list of the 10 best sitcoms ever made. Not that it is really a sitcom either! I have a feeling that it’s main character Gordon Maple would appreciate the whole situation. 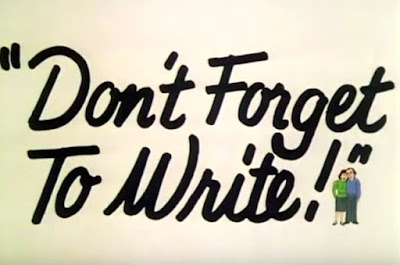 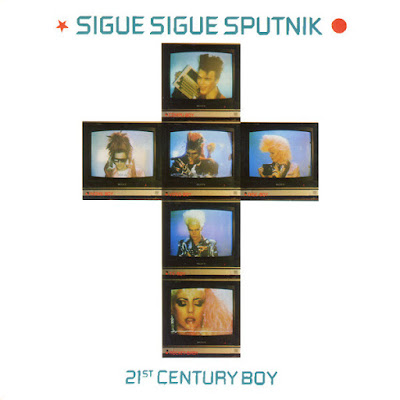