“Bees have human souls” intones Ambrose Doddington in this delightfully batty season 22 opener. It’s a much delayed premiere in the UK as the episode was shot two years ago and first shown elsewhere in late 2019. Quite why ITV have held onto it this long is a mystery that John Barnaby should perhaps investigate but at least the channel have given it a decent Sunday 8pm slot. We’re in the village of Granville Norton one of those very Midsomer places filled with suspicion and eccentric behaviour. Barnaby and Winter are initially called in when Doddington’s beloved beehives are ransacked and some of their inhabitants stolen but soon there is a local victim who appears to have been stung to death. It is fair to say that if you do not much care for bees this is not the episode for you especially that first death which must rank as one of the more gruesome in the show’s canon of murders. What makes the episode work so well is the cast who appear to be engaged in something of a melodrama competition with highly entertaining results. 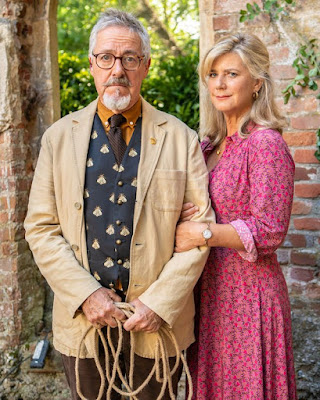 Doddington is played by Griff Rhys Jones who really ought to do more acting; these days he seems to mostly do presenting. He is tremendous here, often armed with an amber tipped staff he is like the High Priest of bees with whom the character claims he can communicate. He even places black drapes over the hives declaring that the bees are in mourning. The actor gives the role serious gravitas as if he’s doing Shakepeare and it works a treat. Matching him is Derek Griffiths, a world away from the amiable tv presenter I recall from old children’s programmes. He plays Rev Brookthorpe and adds to the fine tradition of troubled priests that have graced the series over the years. All fire and brimstone he even gets a scene where he has to throw “heathens” out of the church though they are actually a Yoga class! Imogen Stubbs threatens to out do them both in a riotous scene where Tamara Doddington is threatening someone with hot wax. There are also sterling contributions to the theatrical air from Wendy Peters, by turns sour and menacing as wronged cleaner Lynda Babbage and Jacquetta May as the babbling, Shakespeare quoting dementia sufferer Melissa Doddington.

I’ve not seen a lot of recent episodes so perhaps I’m missing something but DS Winter seems to be used simply for exposition and lacks the little quirks that made some of his predecessors more interesting. This is a fairly low key episode for Neil Dudgeon and the sub plot of his reluctance to exercise seems to be getting used too often.

Bees of course thrive in the bright summer which is not really the milieu best suited for Midsomer’s murders so director Matt Carter makes a horror costume out of the traditional beekeeper’s outfit. That large mask and white suit rear into view out of nowhere behind a victim like some sort of alien, a really effective unsettling device. He also makes sure to focus on the many examples of honeycomb designs that appear whether an aerial shot of Doddington’s maze or a company logo. As for the murders they are shot with chilling attention- one character ends up inside a human Roman candle which we're informed was one of nero's favourite execution methods! 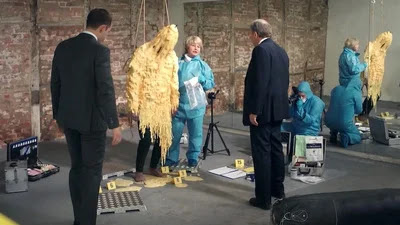 The world of bees is also threaded well through the narrative by writer Julia Gilbert who utilises comparisons between bees and humans as well as having characters offer various true bee facts. Thankfully she doesn’t overload the dialogue with puns choosing to deploy that arsenal in one amusing scene featuring Fleur Perkins, surely the most entertaining pathologist any series has had! Sometimes though all this attention to detail flatters to deceive as the main storyline is a little derivative of previous episodes and too often relies on chance or handily placed clues to move things forward. The identity of the killer is unlikely to be guessed by a first time watch but when it comes it is a slightly underwhelming reveal though you have to admit it is in the bonkers atmosphere established to that point. Also I found another late reveal concerning Doddington somewhat contradicted his clearly madcap persona though perhaps that is the point.

`The Sting of Death` feels more traditional and is all the better for it combining a visual flair with some expansive acting you’d normally only expect at the theatre. Hopefully ITV won’t leave future episodes simmering for quite so long before showing them.