An unexpected late gem, the series’ penultimate episode packs action and intrigue into a familiar sort of scenario and has the air of a Star Trek episode in a good way not just because it duplicates a title from the other series. Exploring a new planet (which bears more than a passing resemblance to the previous episode’s planet) initial findings of a safe atmosphere and bountiful produce soon start to go awry. First, Tony is attacked by a crew member who has seen some sort of powerful light before he himself is affected and goes rogue. As he is chased down, two other crew die after drinking water, another after tasting fruit. Then when an Eagle attempts to take the injured Tony back, all its metal parts begin to corrode causing a forced crash landing back on the hostile planet from which there seems no escape. 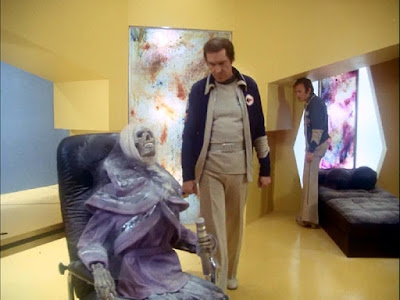 Johnny Byrne pens a persuasive tale which director Bob Brooks enlivens with serious intent. They make the most of an expansive set and Byrne plants developments along the way to maintain audience interest. Most of the ideas here will be familiar to avid telefantasy watchers but nonetheless they are assembled so well that you don’t mind. Brooks shoots each as if they are shiny new ideas from the sequence where Koenig and co are tracking the deranged Tony to the episode’s stand out action as the commander and Alan try to manage a rapidly disintegrating Eagle. It’s a darker episode in terms of the fatalities too with some shocks and screams; one of which was apparently cut in some broadcasts.

Meanwhile there is also the metal structure they have discovered underneath rocks which seems to be powered by solar energy. Once inside, later in the episode, we have a classic trope of a skeleton in a chair being turned to camera which works surprisingly well even though I’ve seen it before. Plus there’s stuff recorded on discs which fills in some of the blanks and is similar to those featured on a previous episode.

Yet it is the thrust of this episode that works so well creating what is absolutely what the young audience watching the show back in the 70s would want to see. An accomplished screen writer, Johnny Byrne draws out the mystery as long as he can and even afterwards manages to make the confrontation with the inevitable alien being interesting and philosophical rather than have the production resort to another furry creature. A being who knows of no other species but whose attempts to communicate cause madness and death is quite a tragic sort of idea even if it doesn’t quite explain the poisoned water.

What I love too is the method by which Byrne gets Helena and Maya down to the planet when Koenig has expressly forbidden rescue attempts and they can’t travel in anything metallic. Instead they use a re-entry glider. I have absolutely no idea what it is but there is something majestic about the concept even if the ambitious production sadly cannot stretch its resources to show this thing gliding over the vista below. Even so it’s a nifty idea that makes a refreshing change from all the hard tech Alpha normally uses.

The confrontation between Koenig and the alien being is superbly written by Byrne to bring out the differences and in its speech cadences and attitude this is one of the more bizarre beings Alpha has encountered. It’s thinking changes as it talks to Koenig, its first ever communication with another life form and the commander responds by removing his protective helmet. Trust and learning are what end the threat. Other shows especially in more recent years have tried the ignorant alien accidently being an unwitting antagonist with differing degrees of success but Byrne pulls it off so well in this episode. And thankfully no character has to dramatically say, “We’re the virus!” which I was expecting.

The cast rise to the occasion with Tony Anholt’s style suiting Verdeschi’s predicament while Martin Landau excels as he re-inhabits the role of the thinking commander often missing from this more straight forward season. Ram packed with interest from start to finish this is one of the best Space 1999 episodes and at this stage who would have imagined that?!