Dorzak
The most remarkable thing about this episode is that Martin Landau is not in it. Perhaps he read the script? His absence is one of the factors contributing towards this being a somewhat soporific affair which only flares into life occasionally. A large spaceship transmitting the universal plague signal (how do the Alphans find out about these things?) turns up with an injured crew member whose assailant is allegedly a Psychon called Dorzak. Maya knows him and claims he’s a peaceable chap but the leader of the arrivals, Sahala, disagrees. She hates Psychons so much that the first thing she does when she sees Maya is shoot her with a staser sending her into suspended animation. The narrative revolves around who is telling the truth- is it demure Sahala with her tale of a dangerous criminal? Or is it the eventually revived Dorzak? And does the viewer really care? Alan Carter does. He falls for Sahala creating more potential tension but it is all played out too timidly. 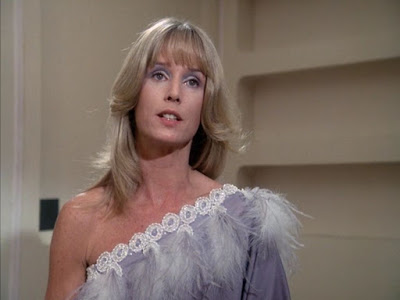 "You made me get out of bed for this episode?"


The trouble with stories about mind control is you have to rely on a director who’ll give the endless moments of someone staring into the distance some unique signature but Val Guest struggles to gain a foothold. The action is awkward even down to the placing of actors in a scene. It gives the impression of a rehearsal rather than the final shoot. Matters are not helped either by one of the most garish sets yet (and for this season that’s saying something!) as the interior of the alien ship looks more like a Seventies hair salon or trendy bar. That the aliens themselves are all dolled up like they’re out on the town and their technology consists of coloured plastic shapes and flashing lights in Perspex tubes only reinforces the lack of conviction that permeates this episode.

You never get any real sense of danger despite Lee Montague’s shifts from benign to nasty as Dorzak. His character is poorly written and half the time it’s not clear what he’s up to. Jill Townsend does her best as well as Sahala but the flashback sequence where we see what had happened lacks any vigour while a scenario near the end where Helena pops something into Tony’s head and gets it out with ease is amusing for the wrong reasons. It feels like a wasted opportunity for Maya too as she meets the only other living Psychon.

The script momentarily touches on ideas of survival but instead writer Christopher Penfold would rather dabble with unconvincing medicine and vague hypnotic powers. Yep, Martin L made the right decision here- I bet those asteroids were far more interesting! 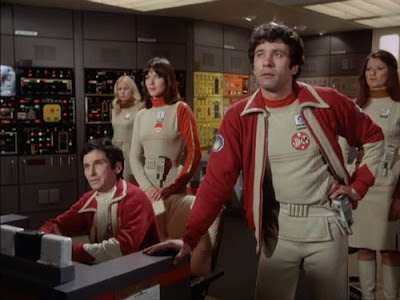 The main cast of season 3.


Devil’s Planet
While everyone else was presumably filming `Dorzak`, Martin Landau gets to run around an alien planet being chased by red leotard wearing girls with whips! Showing scant regard for protocol the commander is on another mission with just one other person as he explores a planet with a seemingly habitable atmosphere. Only when he arrives he finds everyone seems to have died though the cause is unclear. It turns out that they are being beamed in from a penal colony ostensibly having gained their freedom. However governor Elizia knows the secret of their doomed world but hasn’t told the prisoners in order to give them “hope”. Quite what her long term plan is on that score isn’t clear but with the only other person who accompanied Koenig having been killed it is up to the commander to find a way out of this seemingly inescapable conundrum.

The episode works largely because writer Michael Winder doesn’t seem bothered by the unlikely nature of the scenario he’s suggesting. Instead he keeps the parameters of the narrative concentrated on Koenig’s desperate attempts to escape and hoping the mostly male audience will be distracted by the prison guard girls so as not to notice that the premise of the episode is never explained. Being a Gerry Anderson production of course these girls are filmed from behind as much as possible.

The questions soon mount up. Why is everyone dead? How come nobody made panic calls to the colony when something was happening? How long ago did it start because all the guards are much younger than the prisoners? Why doesn’t the virus or whatever it is affect the Alphans? Oh yes- and who the jiggins are all those people in the command center?

We cut back to the usual central set for a few scenes and it is manned by people we’ve never seen before! Who are these people? Why are they saying the things that the regular characters normally say? Is this the night shift? We never really find out because of course the main cast are filming `Dorzak` but this is a glaring thing. Surely the other episode could have spared the cast for an hour to shoot a couple of inserts? Anyway I imagined we were watching season three where the main cast have all left and this is the new bunch. Worryingly for that regular cast it shows just how easily someone who basically looks at a monitor can be replaced. Look at Sandra- she’s there, then she’s not, then she is, now she’s not! Perhaps there is another moonbase they got to for different jobs.

Anyhow after much cracking of whips and hoofing around the large planet set- which looks just like Earth so they could have shot in Epping- we end up with some combat in which Koenig actually hits the female guards! More than once. I thought this was frowned upon back in the Seventies?

The story is one of those that could have been transposed to Star Trek only if it had been Kirk would have won over Elizia with a snog. She and Koenig do engage in some tonsil tennis but it’s a ruse so he can escape. In the end Winder’s solution to an episode that feels as if it might go on forever is to have Koenig get into the transporter and challenge Elizia to follow him if as she claims, the planet is safe. So she does and falls down dead. I thought they might have gone for an option that only men were killed by this plague and her reason for keeping the prisoners was to create a new generation but nothing so interesting as that occurs. They don’t even tell us what the plague is leaving Koenig to stroll off accompanied by the most inappropriately cheery music as we see him pick his way through lots of dead bodies.