Reviewed by Chris Arnsby. John Peel: "Hello and welcome to another Top of the Pops. I've got a bit of an explanation to do at the beginning of this one so..." Janice Long: "No but I was just going to...." John Peel: "Shut up. If you'd just be quiet a minute. What happened was that Bucks Fizz last week started their number and they go to the station and..." Janice Long: "To cut a long story short. Bucks Fizz."


[21] Bucks Fizz: Talking In Your Sleep. You need to go all the way back to 1981 and the 11/06/1981 edition to find the last time Bucks Fizz were considered a big enough draw to open Top of the Pops. On that occasion the song was Piece Of The Action, the follow up single to Making Your Mind Up. Viewers at the time wouldn't have noticed but watched back to back it's immediately obvious that the two performances of Talking In Your Sleep are identical. It's the same routine, performed on exactly the same stage, even some of the camera set ups are broadly similar (the production team probably reused the camera script to save time). I could believe this performance was recorded from the camera rehearsal for the 30/08/1984 show and simply edited across into this week's edition. It's only the camera pan from Janice Long and John Peel at the start that rules this out as an option.


The whole thing has an odd scent of contractual obligation about it. Were Bucks Fizz offered the chance to come back and open the next show as a way of smoothing ruffled egos? If they were, then why were they put back on the same stage to do the same dance routine? The end result looks like something negotiated by lawyers, although it almost certainly isn't. 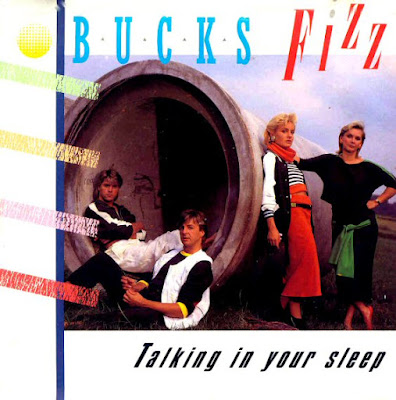 Question two, what song got bumped so that Talking In Your Sleep could get a quick repeat? Not Malcolm McLaren's Madam Butterfly (Un Bel Di Vedremo), which is the highest climber of the week; up 17 places from 32 to 15. Madam Butterfly will be ignored by Top of the Pops. The same fate befell White Lines (Don't Do It) which never rated a mention during its seven week climb up the charts to number 7. Had Bucks Fizz not been back I think we'd have seen the video for Elton John's Passengers again, and Are You Ready? by Break Machine would have taken Passengers' place to be played out over the credits.


While I'm asking questions I can't answer, what was the plan for the live 30/08/1984 edition anyway? Presumably the train was expected to arrive during the video for I Called To Say I Love You which would have been easier to cut short.


[32] Sister Sledge: Lost In Music. The studio microphones pick up a shout just before the lyrics start. It could be "give it more down there," but it sounds more like "get involved down there." Presumably one of the audience cheerleaders in the front row was not showing the mandatory levels of spontaneous fun and had to be ordered around by the Floor Manager (Iain McLean). It's followed up a few seconds later by a second, less audible cry which sounds like "get it on." Hopefully he's not shouting at Sister Sledge. They've got more than enough to be worried about what with quitting their jobs and then getting caught in a trap. 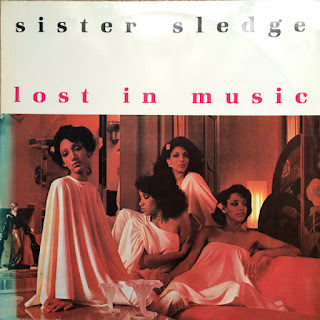 [26] Level 42: Hot Water. Before Level 42 it's the charts, with a ghastly new guitar heavy remix of Yellow Pearl. Ignore Level 42, scan the crowd behind the band for the bloke wearing what looks like a formal black suit and white shirt; he's more or less at the junction where the two rows of dancers come together. For the duration of the song he stands still and does nothing except point at the ceiling and slightly raise and lower his hands. He breaks character at the end of the song and joins in the applause for Level 42.


[11] Alphaville: Big In Japan. No sign of pointing man. There is a bloke wearing a black jacket standing on the gantry stage left of Alphaville but it's not the same person. Marian Gold the lead singer of Alphaville has been shopping in all the most fashionable boutiques of London. Perhaps he should have restricted himself to just one. Individually the dark-checked trousers, white jacket, formal white shirt with bow tie, or red cummerbund would have been a fashion statement. Collectively they represent a fashion cry for help.


Congratulations to whoever named the Alphaville website, Alphaville Moonbase.


[5] Elton John: Passengers. At the close of the show Janice and John are joined by a fresh-faced Bruno Brookes. He's presenting the show "next week". Not on BBC4 you're not (D*v* L** Tr*v*s).


Performance of the week:  Alphaville: Big In Japan
Posted by John Connors at 23:19