Reviewed by Chris Arnsby. Mike Read: "Surprise surprise it's Top of the Pops. Me and Tom wondered where you'd got to, to be honest." Tommy Vance: "Well, we made it and we're glad that you made it too. Our first band are in our studio tonight. They're from Münster in Germany. Alphaville who are Big In Japan."
[43] Alphaville: Big In Japan. I'm not sure Big In Japan is the best song to open the show. Coming up later are two more obviously crowd pleasing singles, Miami Sound Machine and the dance antics of Break Machine (there are a lot of Machines -well two- on tonight's edition, is this the first sign of that technological singularity I keep reading about?). I like Big In Japan but, rather like Mothers Talk which opened the last edition of Top of the Pops, it feels as if Michael Hurll is deliberately resisting the obvious by putting this song in pole position. [15] Elton John: Passengers. On video (now) but I think it's been transferred from film to allow for the addition of various video effects and a faux widescreen look. Whoever was in charge of the widescreen effect clearly couldn't decide what width looked best. The picture varies from 4:3 to different ratios on a shot by shot basis.
[40] Break Machine: Are You Ready? Tommy Vance and Mike Read banter about the Cyrillic lettering on the front of Read's shirt. "I hope it's not rude," he quips after Vance calls him "comrade."
Break Machine appear on the same stage as Alphaville, slightly redressed with the removal of the fifties wallpaper style backdrop. Except that's not quite right... the lighting grid is different and the scaffolding behind Alphaville is recessed but straight for Break Machine. I would be prepared to dismiss this as the hard work of various behind the scenes bods at the BBC except some of the changes seem too substantial to do in a recoding break. Notably the addition of a step down to a lower tier rostrum along the front of the stage. The short explanation is that I wasted far too much time establishing Break Machine's performance was actually recorded two weeks previously during the studio session for the 09/08/1984 edition. On the same stage as used by Windjammer for their memorable performance of Tossing And Turning. This explains why Michael Hurll didn't want to use Break Machine as the opening act. He does like to pan directly from the hosts to the first group in a single camera move. 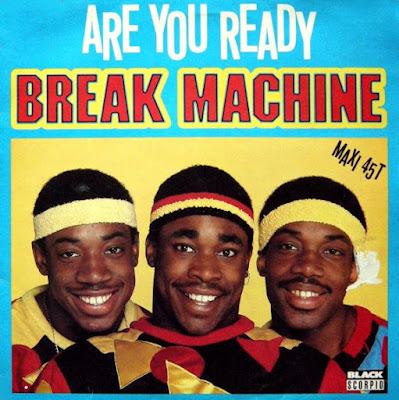 [16] Miami Sound Machine: Dr. Beat. It's the Miami Sound Machine (with lead vocalist Gloria Estefan), later to become Gloria Estefan and Miami Sound Machine, and then just Gloria Estefan. (John – Nowadays she’s just called Gl) The band are singing about Dr. Beat so obviously they should all be dressed in surgical greens while Gloria Estefan perches on a medical trolley and a couple of the audience cheerleaders are dressed as sexy nurses. It's good to see Top of the Pops hasn't lost the creative edge that saw Legs & Co dressed as sexy hookers for Bad Girls, sexy sad clowns for Tragedy, walking through doors sexily for Let 'Em In, and dressed as a sexy tree for Donna Summer's version of MacArthur Park.
Dr. Beat is, so far as I can remember, only the second charting song about a medical professional. It follows in the footsteps of the 1976 song Dr. Kiss Kiss by 5000 Volts. The medical profession comes off badly in both songs. Dr. Kiss Kiss behaved in a way that surely saw him struck off, while Dr. Beat is denying treatment to judge by Gloria Estefan's repeated begging for help.
Towards the end of the song the picture cuts to a wide shot of the stage. One of the cheerleaders, stage right and dressed in white, is bent double and apparently looking at the floor. He's clearly waiting for his moment and when he thinks the camera's off him he dives forwards and grabs something. Unfortunately he's wrong, he's not off screen he's in profile but frustratingly the object he grabs is just off screen. Whatever it is, he's pleased to have got it because he does a double arm pump and then leans forwards again as if picking up something else. Was Gloria Estefan shedding small change?
[18] Tracey Ullman: Sunglasses. On video, on location at Sandbanks beach in Dorset with Adrian Edmondson.
[23] Spandau Ballet: I'll Fly For You. Spandau Ballet have come into the studio to perform I'll Fly For You. Good for them.
[19] Rod Stewart: Some Guys Have All The Luck. On video.
[1] George Michael: Careless Whisper. George Michael has also come into the studio to solo-promote a song released on the Wham! album Make It Big! This is going to be dull. It's not the world's greatest song and George has been set to serious and soulful mode so there's very little chance he'll be dancing around like he did for Wham Rap!
Worst fears are confirmed early. This is going to be televisual porridge. A chance for the camera operators to practice staying in focus while slow zooming in and out from George Michael's face. What am I supposed to do for the next four minutes? Spend my time gazing into George Michael's dreamy eyes?
Actually, the staging is more interesting than expected. The audience is stood on the scaffold walkways in the background and packed round George Michael's stage. Two pairs of audience cheerleaders have been placed on rostrums so that they poke up above the level of the crowd (there's also a nameless saxophonist) and they're picked out in soft orange light to stand out against the dark of the studio (Lighting is credited to Dickie Higham this week). The slower pace of the song allows for longer more sweeping shots (in between slow zooms in and out of George Michael's face) and the effect is atmospheric and intimate. 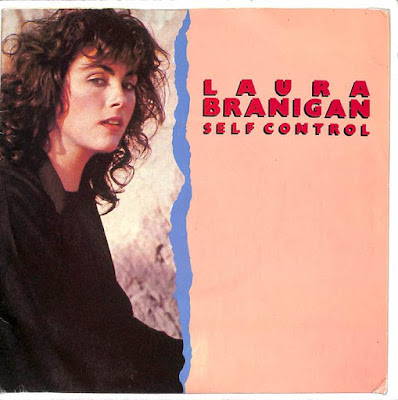 [6] Laura Branigan: Self Control. Tommy Vance teases us with details of next week's Top of the Pops. "British Rail are going to unveil their new InterCity high speed train and they're going to call it Top of the Pops." Mike Read adds, "Not only that, it's going for the speed record between London and Bristol so join us. Be part of the speed record on Top of the Pops next week."
This episode won't be repeated on BBC4. J*mmy S*v*l* is on the train, and Mike Smith was one of the hosts of the 30/08/1984 edition; his episodes of Top of the Pops are not repeated to respect the wishes of his estate. It's a shame because the footage that exists on Youtube is gloriously chaotic.
Bucks Fizz's performance of Talking In Your Sleep is interrupted after two minutes so that Simon Bates can babble away over a shot of the train pulling into Bristol. For reasons that never become clear Simon Bates and the camera operator have been separated. Simon Bates is waiting at the door to S*v*l*'s carriage while the camera operator is stationed further down the platform to get a shot of the station master stopping the train. Simon babbles away in sound only while the camera operator walks down the platform and pushes through the crowd. A couple of minutes of chat follow, during which Norris McWhirter disembarks and confirms the record, and then Simon Bates hands back to Mike Smith in London.
Also on Youtube is Howard Jones' performance of Like To Get To Know You Well which starts in walkabout style, like Holly Johnson's tour of the studio for the final performance of Two Tribes. Howard, a guitar player, a hand held camera operator, and what appears to be most of a steel drum band, all climb onto the world's smallest podium and are surrounded by the crowd who press forwards to shake Howard Jones' hand (the theme of the song, you see).
Performance of the week: George Michael: Careless Whisper.
Posted by John Connors at 22:43