For what is ostensibly an action orientated series aimed at a younger audience, `Black Sun` is a surprising diversion. David Weir’s screenplay clearly draws from the hippy mentality prevalent in late Sixties culture with its eventual message “everything is everything else” and takes a refreshingly philosophical angle on a potential disaster. Moonbase Alpha is being drawn into an enormous black Sun whose pull is liable to destroy it. “We’ll all be dead in three days” is Commander Koenig’s not exactly inspirational summary of the scenario. Victor Bergman however has other ideas, scribbling and thinking his way to a plan involving a forcefield that will use the base’s anti gravity towers as its tentpoles. “It looks like fish scales” someone says improbably. If the first section of the episode leans heavily on the hardware and mechanics that might save them, matters become more interesting when other aspects are introduced. 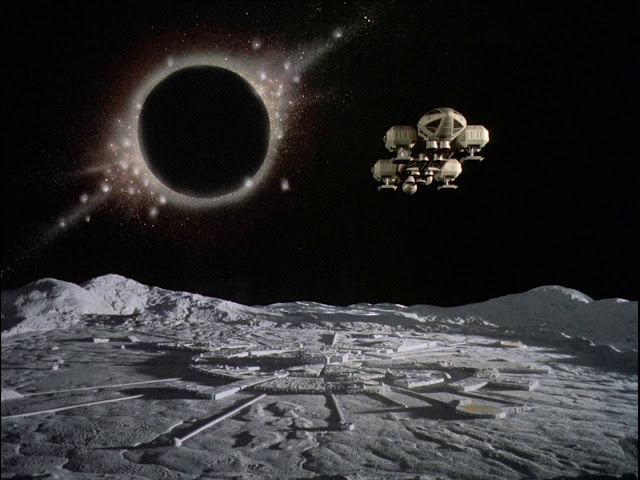 The series was never one for lengthy character scenes but what this episode does- and some of this is strong editing- is show us facial reactions of growing fear and tension as the Sun drags them closer and closer. Without CGI breath at their convenience the programme makers relay on increasing amounts of clothing and as things become critical so everyone is more casual. A more obvious approach might have been to have people losing their cool (as a similar scenario on the series Moonbase 3 did rather badly) but the irony is that the crew seem more real here than they do in many other episodes. Weir’s sparse dialogue works well, coaxing characters out of their shell and resulting in some lovely exchanges. 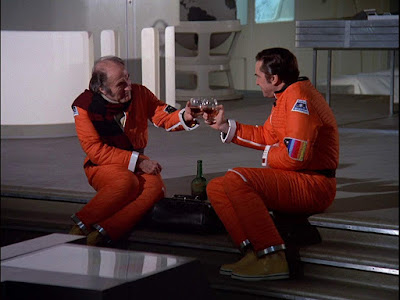 This is Barry Morse’s episode all the way as he relishes conveying Bergman’s questing need for answers and also his willingness to step beyond science when matters present themselves thus. So as he and Koenig sup on a sixty year old brandy in the now sub zero temperature talk turns to existence, to God even. In a fascinating sequence they become see through, then old men as they speak to a nameless individual who says she has “a thought every thousand years” Is this God or a “cosmic intelligence” that the two have concluded may have helped them survive their perilous journey? Weir leaves matters vague enough to raise interesting questions but it seems as if this intelligence does save them.
The other strand involving an escape mission seems overlooked once it takes off and you can sort of see how it will be resolved. There are niggling sequences that seem out of character with the rest of the episode, in particular Kano’s insistence about the computer staying on full power and Alan’s assertive showdown with Koenig about going on the escape shuttle.
Even so this is a class episode that ends in a visual feast of star fields and colourful galaxies. Apparently a favourite of the cast- especially Martin Landau- `Black Sun` shows that the series could be more flexible than you’d imagine.