In 1975 television fantasy was thin on the ground. Most popular shows from the States were either police based or else Earthbound stuff like The Six Million Dollar Man. The Star Wars boom was still a couple of years away while in the UK apart from Doctor Who these sort of shows sat mainly in the children’s programme slots. It’s important to mention this because when it arrived Space 1999 seemed like a breath of fresh, colourful air. People watched it with enjoyment at the time and it is only later that it came to be seen in a somewhat less appreciative light. Personally I loved it and had models of the Eagles (the spaceships not the group) and those poster magazines with gorgeous colour photos of weird alien locations.


Many of the criticisms of the series are at least partly valid- there is certainly a lack of empathy amongst the main characters and some of the plots are hugely derivative. The science is of course all over the place and you have to smile at the idea that what was then a view of 30 years into the future depicted everyone still wearing the flares and hairstyles of the mid -70s. At the same time, the series is enormous fun to watch with its gaudy alien planets and impressive model shots.  And can you really dislike a programme whose opening credits give away half the plot and depict the two stars staring into space while slowly revolving on a platform. I mean everyone does that at home don’t they?


So over the coming weeks I’m going to be watching every episode of the first season to see what I find then nattering about it on here. It’s important to point out these are not intended to be either episode guides or definitive reviews of the series, just reactions and observations as I journey alongside Commander Koenig (no relation to Ezra or Walter) and a remarkably smooth flying Moon through the Universe. If I survive the G Forces I’ll probably do season two next year. So let’s go back to 13 September 1999 or to be more precise 4 September 1975 when the first episode was originally broadcast…. 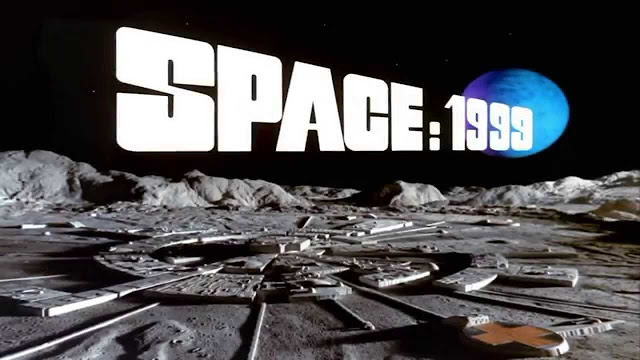 
Necessarily atypical opener `Breakaway` often suggests another type of series altogether to the one which this became. Earnest and filled with lots of tech talk, the episode approaches the events leading up to the Moon’s unexpected fate in linear fashion with only the infamous This Episode sequence hinting at any action. A better approach might have been to open with the cataclysmic events of 13 September 1999 then go to a `one week earlier` caption. What the episode largely becomes is a space mystery as the Moonbase crew try to discover why several people have been hit by a virus that is always fatal. Is it radiation from the nuclear dumps located on the Moon? No trace of radiation can be found by surveys and the perpetually perplexed Professor Bergman is searching for answers when a new commander- John Koenig- arrives. A plot line I’d completely forgotten about is the presence of a new planet they’ve dubbed Meta which is seen as possible for colonisation. It is the drive by the authorities on Earth to pursue this mission despite the unexplained illnesses that propels the narrative


It is interesting to see what is established here. There’s a line about Koenig last being on Moonbase Alpha five years ago meaning that in the mid 1970s people really did see the establishment of a lunar colony as something likely within twenty years. I suppose 1999 sounded like a significant date but the scenario here really needs to have been pushed forward to become Space 2099 at least.  What is even less tenable however is the idea of using the Moon as a dumping ground for nuclear waste and then building a base nearby.


We also see the sort of technology mid 70s writers expected us to have by the Nineties. Communications see people speak into screens on pillars presumably anticipating Skype. Doors are opened and closed by somewhat clumsy remote controls. The main control room isn’t a bad design at all making me feel nostalgic for a time when `the future` was depicted using as many flashing lights and screens as possible. What did jar at the time and still looks odd is the main screen which after becoming used to the much larger version in Star Trek always looked too small. 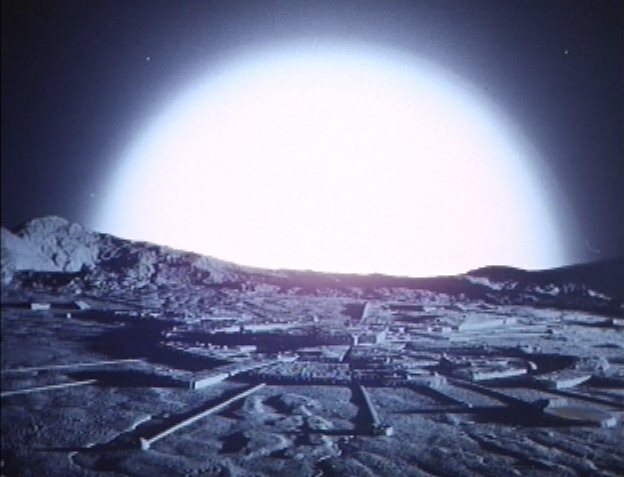 There isn’t time for much introduction of characters except for the main three. I remember when I watched this as a child Koenig always looked cold and this is the commander’s personal detachment. Martin Landau’s performance also seemed to me to be rather underwhelming back then but later I came to realise what a superb actor he was. His later work in Crimes and Misdemeanours and Ed Wood showed his skills. Now I think I’m going to enjoy this performance more than I did in my youth. Landau shows the responsibilities of command well and maintains just the right balance between authority and trust. You can tell in the sequence where he greets people he recognises from his previous trip that he is well liked and soon he undertakes a mission someone of his stature need not do to try and find out what is happening. Barbara Bain seems to be shot in soft focus as if advertising hair product but the actor brings an unexpected steeliness to Helena Russell who makes her opinions heard. Professor Bergman played by Barry Morse with an expression of perpetual worry is on hand to speculate on events though I wonder what his speciality is. 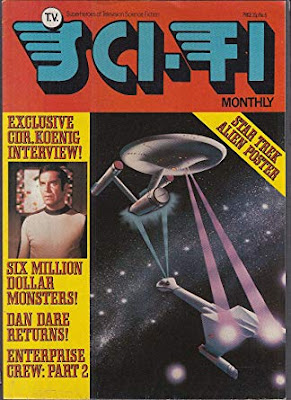 The build up to the climax is suitably moody until with a lurch that still takes you by surprise a series of explosions just goes on before the Moon breaks away from Earth’s orbit. Real science would tell you of course that such a happening would see the planet disintegrate totally under the pressure of such a fissure but as that would make for a very brief series we instead have the crew pinned to the floor by G Forces. This actually works really well even if the physical damage done merely amounts to some sparks and toppling furniture. There is a definite sense of something amazing happening though you feel even amongst some of the professionals a little panic might ensue. There’s a matey thumbs up between pilot Alan Carter – who saw the whole thing from the vantage point of his Eagle shuttle- and Bergman that suggests they’ve been through nothing more serious than a bit of a storm.
The episode ends on the cliffhanger possibility that Meta might be somewhere they can settle.


As you’d expect from the Gerry Anderson stable the model work is top class especially the Eagles in flight and some panoramic views of the lunar surface. Even when people are out and about on the Moon they walk in slow motion – I think I only caught a glimpse of wires once. If the mood of the episode is grim the visual aesthetic inside Moonbase seems brighter with white panels, lots of well -lit walls and twinkling coloured lights.


It’s as good an establishing episode as you can get given the amount of material that had to be included and builds to a successful gripping conclusion. There’s definitely enough of a mystery built to keep people watching and the suddenness of the big accident jolts the episode to a place where you’d definitely tune in again next week. Which indeed we will!