Roy McBride must be the most accident prone- yet also the luckiest – man in the Universe. What befalls him during the first five minutes of this intriguing film would be the end of a lesser man but what he has to deal with for the next two hours few movie heroes would survive without superpowers and he doesn’t have those. Ad Astra (which means `To The Stars`) is a story that may span the reaches of space and contain a world threatening problem but at its heart it is a simple, family tale of how generations can both reject and reflect each other. It is thoughtful yet gripping, intimate yet Universal (in both senses) and if a bit unbelievable at times still a thrilling cinematic ride.
Spoilers past this point 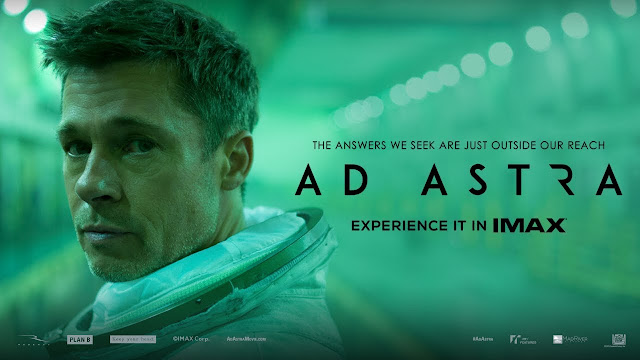 In the “near future” enormous power surges are causing havoc and their origin appears to be from somewhere in space. McBride himself is a victim in a vividly realised opening sequence that sets the tone for what will be a rollercoaster trip. The trailer may give the impression of serene space scenes with slow moving craft and elegant music but Ad Astra packs a surprising punch never allowing more than ten minutes or so to pass without Roy being embroiled in another near fatal, desperate or dangerous scenario which he escapes by the skin of his teeth. Each of the sequences are imaginative and strongly delivered notably the first high speed vehicle chase I’ve seen on the lunar surface and a terrifying encounter with unexpected horrors on a spaceship. When these feats are kept smaller scale they work brilliantly but towards the end, as emboldened as their main character, the film makers ask us to swallow ever more incredulous scenes which, while remaining exciting, start to pull at believability just a bit too much. I imagine actual space scientists are having a field day with the end one in particular.
Even so, if the `near future` date seems a tad over ambitious, there is certainly an attempt to create a believable structure for space exploration. The film looks amazing at all times and though there are moments of wonder, it refuses to paint too idealistic a portrait either of space travel or those who are involved in it. Depressingly it also suggests that our future amongst the stars will be stained with the same crime and differences that our life on Earth is and also full of Subway outlets! At the same time though, writers James Gray and Ethan Gross convey the appeal of space travel even if it can be dangerous.

Brad Pitt's performance here is stoic, as his McBride begins the narrative seeming to be a straight laced, confident, quietly efficient guy. This calm unravels somewhat as events drag him back to reflect on his personal failures outside of his work and also his relationship with father, himself a venerated astronaut and explorer.  When the authorities speculate that McBride senior’s pioneering work may be the cause of the surges, it adds an urgency to Roy;s involvement. However he seems to find reconnecting with his father more frightening than all the perils of space.
The film is vague on what these experiments are and quite how they might travel so far to hit the Earth. There is also a voiceover that I don’t think the film needs even though it is looking at big issues. The intimacy require for the father / son dynamic is ill served by Roy’s narration which doen’ t always seem like the same character.  Brad Pit is very capable of expressing Roy’s state of mind at every stage and via repeated psychological examinations we see. As he strives to find out the truth- about his father’s project and whereabouts, Roy starts to make the same –sometimes fatal- errors. Yet in confronting his past he can start to realise where he has gone wrong. It’s a bravura yet controlled performance from Pitt- you can imagine other actors going too far or not far enough with it- that is rightly being suggested as having award winning potential. Good to see veterans Tommy Lee Jones and Donald Sutherland turn up in vital roles to add gravitas though Liv Tyler gets little to do as Roy’s estranged wife, a character whose perspective is missed.
Inevitably the denouement can’t really support the weight of expectation – and a final sequence seems unlikely even in the context of the fiction - yet Ad Astra by then has done enough heavy lifting to be well worth seeing, preferably on the largest screen available.