Given that this film is not endorsed by the writer’s estate and did badly in cinemas I was still intrigued to see what take it took on the formative years of one of the best known authors in the world. It is easy to see why the movie didn’t take off as we live in a time where historical characters are encouraged to speak with a modern tone and Tolkien resolutely and refreshingly stays in period. Its dialogue springs from the screen but because it’s not talking about kejoree for breakfast or something similarly Downtonesque it means we have a movie which celebrates diversity of language and literature which is always a hard sell. I’m not sure the means the filmmakers employed to liven this up always works either though there are some very satisfying aspects to the movie. 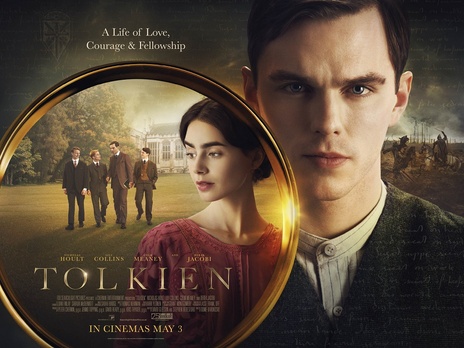 However it is a while since I’ve enjoyed a film so much for it’s rich dialogue. Tolkien has studied many languages and invented his own (borrowed partly, he admits, from Finnish) so when orphaned and packed off to public school he soon finds three likewise artily inclined pupils with whom he bonds. Their Tea Club and Barrovian Society get togethers in a tea room are the source of enthusiastic writings and lively- sometimes heated- discussions. They banter and argue over the merits of writers and ideas with that confidence only young people can have that they will change the world. It is a perfectly written and acted depiction of friendship with shades of Dead Poets Society albeit for all forms of literature and artistic endeavour.
The film also scores highly in its portrayal of the romance between Tolkien and a fellow orphan Edith whose teenage courtship is as much about shared interests as it is romance. Nicholas Hoult and Lily Collins share an eager chemistry here but you can see the author’s bristling ideas taking shape as they grow closer- a scene underneath an opera house is especially good as mixing all these things into one. So as a human drama this film works really well enlivened by an excellent cast.
Where Tolkien stumbles is on two key counts. One is ignoring the fact that one of the biggest influences or the author’s work was religion but from this film you’d be hard pressed to see that it played any part in his life. This despite the fact that after his mother’s death, he and his brother and entrusted into the care of a priest. The latter seems only to be used by the narrative as a surrogate parent. Then there is the way the film choses to depict the first World War scenes, adding surrealistic forms to explosions, smoke clouds and even showing us reflections of knights on horseback in pools of blood soaked water. This detracts from the fact that the actual horror of trench warfare is already very powerfully rendered and as a result pulls our attention to the film maker rather than the narrative. I don’t believe either that anyone in real life would imagine such fantastical nightmares when real horror is all around them. It feels too forced, too obvious and given the groundwork earlier uneccessary, if visually striking, adornment. Ironically given the novels he wrote the film is at its best when it’s more down to earth.