In 2017 it was announced that there are now four types of chocolate.  Joining milk, dark and white is ruby. According to the website of its originator Barry Callebaut, a Belgian- Swiss cocoa company “Ruby offers an intense sensorial delight, a totally new taste experience: neither bitter, milky or sweet, but a tension of fresh berry fruitiness and luscious smoothness.” Others have described it as having intense fruitiness as well as fresh and sour notes. Ruby chocolate is not, as some have imagined, just another flavoured chocolate but is made from an existing cocoa bean variety that can be processed into a distinctive taste. In truth such a new product should already have created more waves than it has but its existence is not that widely known. When I mentioned it at work amongst colleagues who between them know about most subjects raised nobody else had even heard of it.

Ruby chocolate was officially unveiled at a private event in September 2017 in Shanghai but had been in development since 2004. The company responsible Barry Callebaut is not exactly a household name despite being one of the world’s biggest producers with an average annual production of 1.7 million tonnes of cocoa. The company started in 1996 via a merger of Belgian chocolate producer Callebaut and the French company Cacao Barry. They have a website dripping with luscious descriptions of this “fourth type of chocolate” as they consistently call it. So how did it come to be?
They’re not really giving much away of course. All they do say is that one of the company’s experts discovered certain cocoa beans could produce a chocolate with an exceptional flavour and unusual colour. These Ruby cocoa beans grow under climate conditions found in Brazil, Ecuador and the Ivory Coast. Naturally the arrival of something so potentially game changing has its share of doubters. Some business journalists have alleged the chocolate is made with unfermented cocoa beans that have a natural red-pinkish colour which the company has denied. Barry Callebaut also state categorically that ruby chocolate does not contain any berries, berry flavour or berry colourings. Other critics have said the taste is just too sweet for mass consumption.
Barry Callebaut are eager to stress also that ruby chocolate is not the same as flavoured chocolate which has been around for some time. Many brands offer orange or mint flavoured  products and any fruit flavour can be applied to chocolate but the company say that ruby chocolate is not the same as that, but a totally new form of chocolate.  Back in the 70s and 80s there was even a creamy strawberry flavoured candy bar made by Nestle as a tie in with the cartoon The Pink Panther. Naturally it was pink in appearance with embossed images either of the Pink Panther itself or his car. Similar in colour, this was probably the closest taste to ruby chocolate that has previously been achieved.
Despite all these claims – and statements regarding its flexibility - the public launch of ruby chocolate has been fairly low key and it has been mostly used by artisan chocolate brands such as Fazer, Perugina, Prestat, Baci and Leonidas which, let’s face it, none of us have heard of. KitKat however is another matter and it is this company that has developed a four finger ruby chocolate bar that is available in the UK. People who’ve tried it have described a taste similar to the white chocolate version with added berry sweetness. 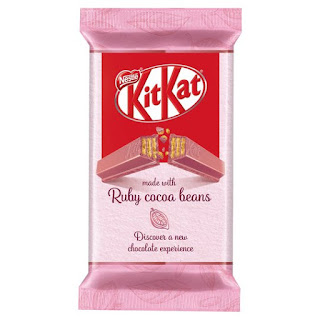 So what does it actually taste like? Well just finding ruby chocolate is not easy as most supermarkets don’t seem to stock it even in an aisle full of chocolate products. My own quest to find a bar to sample finally succeeded in a small newsagent in the city centre where I found the ruby chocolate KitKat and right now I’m going to taste it and give my instant reaction. OK here we go…
Well…it is like sweet chocolate at first then you get a fruity flavour that doesn’t appear till you’ve been chewing for several seconds. By the time you’ve finished the flavour has softened to a milder fruit. That is so weird as if it is designed to release three distinct flavours one after the other as you progress. Those people at work I mentioned earlier tried the same bar and nobody seemed that fussed on it. The concensus of everyone was that it is far richer than other types of chocolate and you couldn’t eat a lot of it. I’ve taken two small bites and I already feel as if I’ve consumed something the size of a Mars bar. Its very filling and I think it needs to be marketed in smaller amounts to have a chance of large sales. I’m not sure whether it will actually catch on in a big way and may remain a niche product unless further research can find a way to present it.
Still its not every day you can try a comparatively new foodstuff but I’d say that there’s a long way to go before ruby chocolate can become anywhere near as popular as the other types.
Posted by John Connors at 22:25