The crux of this episode is that the kind of life the Alphans will encounter may be somewhat different to their expectations. It’s a timely and well mounted escapade that also shows us something of the dynamics of command. When a mission to a potentially habitable planet (which incidentally looks like a cocktail) returns with a third person on board that’s strange enough. The fact that he appears to be Helena’s late husband who went missing presumed dead during a mission near Jupiter five years previously is just bizarre. It certainly gives Victor several chances to look puzzled and engage in tests; my favourite one is the scan of Russell which suggests he is dead. Victor’s scientific knowledge seems boundless yet for Koenig, eager it seems to please the crew, even this oddity must not stand in the way of evacuation. 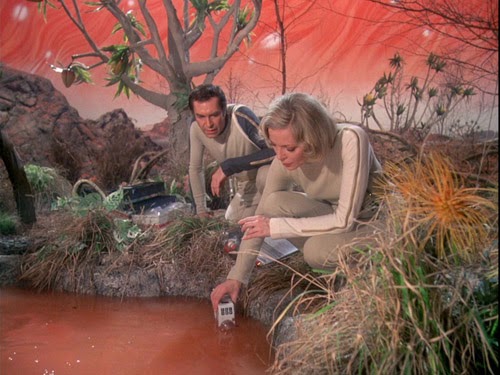 One of the criticisms often levelled at this series is a lack of interesting characters yet this episode certainly displays quite a lot of character traits. Koenig is all matey and smiley one minute but if he’s challenged takes the hard nosed decisions even though Victor is telling him he may be wrong. The latter’s superior knowledge does not however cloud his loyalty and he supports Koenig’s decisions even if he’s warned against them. Helena meanwhile, having never met Koenig before according to the first episode, seems to have developed a bit of a thing for the commander though this may be something to do with the fact that nobody knows what order the episodes are supposed to be watched in. After some research came up with several lists purporting to be the episodes in order yet all different, I'm just watching them as they appear on the dvd. Anyway, when they go down to the planet- despite this being hours after Helena's supposed returning husband has died again- they end up sitting by a pool of red water drinking and looking close enough for the crew to have dubbed them Johnelena. Terra Nova itself has a beautiful red sky, parrots and is the sort of alien landscape much favoured by the original series of Star Trek. To the modern eye it looks like a stage set but a colourful one at that.

Lee Russell’s vague warnings not to go down to Terra Nova are of course never clear enough to give Koenig cause for concern even if he explains himself later on the planet. You can sort of sense where the episode is going but Charles Chrichton’s experienced direction manages to over-ride the climax which might have had 1975 viewers scratching their heads a little. Yep it’s one of those `things are now what they seem to be` moments when everyone except Helena is killed as the previously serene gaudy planet turns nasty. It’s a very effective climax if only because with about a minute to go Koenig, Paul, Sandra and Carter are all dead, their means of escape has exploded and Helena is lost amidst a devastated landscape. Then `Lee` shows up to explain- all she has to do, thanks to the link with him is see what she wants to see. It actually works giving an uplifting climax tinged with her bittersweet memories of what happened. It would have been interesting if she’d kept some of this power but as far as I recall it never crops up again. It might however explain why Helena always seems to look like she’s staring at something miles away. It’s a good job Victor was never down there though, he’d never have been able to explain it!
Incidentally, playing Russell is no less an actor than Richard Johnson who brings a detached quality to his performance though it is surprising to see former Champions lead Stuart Damon reduced to a cameo as an Eagle pilot.
Posted by John Connors at 22:35