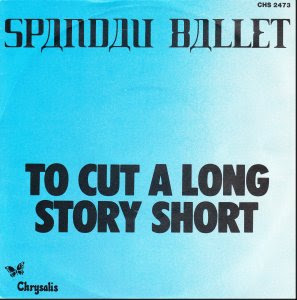 David Bowie: Fashion [6]. Simon Bates keeps calling this a film. It's plainly shot on video. Simon Bates knows nothing. Fashion starts out looking like it's going to be smaller scale than the previous video for Ashes To Ashes; just David Bowie, and a band performing. It quickly takes a turn and becomes endearingly bonkers when we see a soup line of refugees from a masquerade ball.  The best bit of the video? The circle which overlays objects on screen and invests them with significance; a giant pill, a dog, and a pair of ice cream sundaes.
Gladys Knight & The Pips: Bourgie Bourgie [33]. Ugh! Simon Bates brings on the two main players in Doctor Hook. Fortunately nobody tries to make sexy eyes during the interview. This is followed by Gladys Knight (and The Pips, of course) who have caught the midnight train to get to the Top Of The Pops studio. Frankly The Pips are putting in 90% of the work on stage. Gladys Knight just stands there. Captionwatch: the words Gladys Knight fly in diagonally from the edge of the screen before the words & The Pips fade up separately.
John Lennon: (Just Like) Starting Over [20]. The death of John Lennon has hung over the 1980 repeats, but it's still an odd moment when Simon Bates starts speculating over what will be the Christmas number one. It's not going to be Abba, but amazingly it's also not going to be John Lennon. Frustratingly the 1980 Christmas show will have to be skipped by BBC4 because it's presented by J**** S***** and Peter Powell, but it's worth tracking down the moment when Peter Powell has to introduce the St Winifreds School Choir because for a second it actually looks like his indomitable enthusiasm has been crushed. Watch The Story Of 1980 documentary on Youtube if you want to see a man almost broken by the fickle taste of the British public. Before John Lennon filtered via the medium of Flick Colby we have to sit through an interview with Stu Francis. "Ooh, I could crush a grape" Etc. Stu's there to boast that Crackerjack is getting eight million viewers. I know, I was one, but we only watched because there wasn't anything better on. Stu's also there to plug the new Top Of The Pops compilation album featuring Blondie, Boomtown Rats, David Essex, and... who's that? B.A. Robertson. Yuk. No sale.
Liquid Gold:  The Night The Wine And The Roses [32]. Who let Liquid Gold back into the Top of the Pops studio? Have they discovered the secret passage previously only know to The Dooleys?
Spandau Ballet: To Cut A Long Story Short [43]. Spandau Ballet arrive in the Top of the Pops studio a month after Adam & The Ants. Too slow boys. The New Romantic movement has already been invented.
Abba: Super Trouper [13]. Once again Simon Bates describes what we are about to see as a "film." He's right, on this occasion, but a stopped clock, etc. I could be dangerously logical as a kid, and I remember thinking that as this song included the lyric "feeling like a number one," it would be nice and neat if the song did indeed get to number one. Captionwatch: At the end of the song the word Abba flies onto the screen repeated to form a diamond shape.
Top Ten Countdown: There are some presentation oddities during this week's top ten. First of all we get a coloured caption where the words Top and Ten swap places. The colours swap on a random basis, but suddenly the caption turns black. Normal colour  is quickly restored, but then the caption switches to white and is faded from view. Did the BBC's colour generation machine go wrong? The number eight clip for Orchestral Manoeuvres In The Dark goes without a caption, but then Adam & The Ants at number seven has both the band and song credited; but confusingly Adam & The Ants are represented by a photograph when the other songs so far have all used clips. David Bowie, and Status Quo both have clips without captions but again at number four I Could Be So Good For You uses a still photo of Dennis Waterman, and a caption for his name and the song title. The same thing happens for Bad Manners and Special Brew at number three (except that the picture is of Bad Manners, it would be confusing to reuse the Dennis Waterman still). Evidentially the BBC feels the need to only caption photographs. Finally as we reach number two the initial coloured Top Ten caption is faded back in, in time for...
Number One: Blondie, The Tide Is High. Here's another song which features the words "number one" in the lyrics. My memory is of watching this song slowly climb the charts before it slotted tidily into the number one position. My memory is dead wrong. The Tide Is High hasn't even been played on Top Of The Pops before tonight; except for a brief snippet during the charts the previous week (skipped by BBC4 because it was recorded in an environment containing J**** S*****). Maybe I'd seen the song elsewhere on Cheggers Plays Pops, or Swap Shop.
Closing Titles: Young & Company, I Like (What You’re Doing To Me) [30]. A young woman in the audience lowers a party hat on to Simon Bates' head as he wraps up the show. With a gracious cry of "come here" he grabs her and begins slow dancing as the closing titles run. We then cut around several shots of the audience dancing before a wide angle of the studio now shows Simon Bates dancing with... the creepy one from Doctor Hook! What happened? The other one (the one with the eyepatch) then comes in from screen left and there's some light clowning around, before Simon Bates relocates the woman from before and begins dancing with her again as the Vision Mixer fades to black.
Performance of the week:  Spandau Ballet: To Cut A Long Story Short