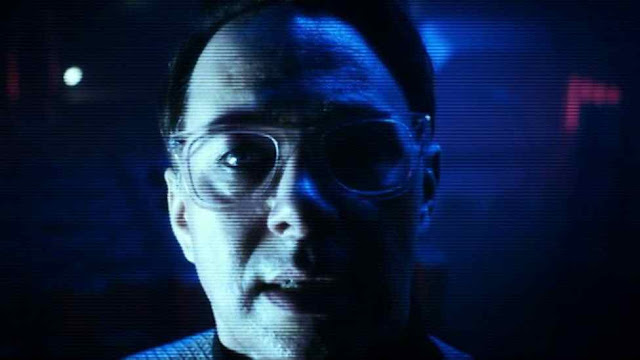 By the by, ‘Sleep No More’ – like much of series nine – warrants a far greater audience than it gets.  Okay, the premise of a ‘found footage’ episode didn’t exactly fill one with anticipation – for a subgenre of horror trope all but invented by 1999’s The Blair Witch Project, the camera diary has been done to death in the last decade and a half.  Even Doctor Who has delved deep into this stylised convention in 2006’s ‘Love & Monsters’.  But where the conceit of ‘Sleep No More’ comes from an increasingly unreliable narrator, for once we as the viewer are robbed of an ‘A-ha’ moment; Gatiss’ script having great fun with utilising the video confession format to play with expectations and assumptions.  And on the whole it largely succeeds.
Part of the reason why it does comes from Gatiss’ mining of a common Who propensity to make monsters out of the mundane.  It isn’t sleep here that’s the enemy, but the very organic residues of our existence.  Vacuum under your bed or run a finger along the mantelpiece and dust is everywhere, always rearranged and never removed.  Weaponising such an inherently harmless yet omnipresent substance is the episode’s coup de grace, with no doubt dozens of youngsters (or at least the ones allowed to stay up for the show’s current nocturnal timeslot) worrying about not only going to sleep, but of rubbing a potential monster out of their eyes in the morning.  The creatures themselves, the Sandmen (though personally speaking ‘Dust Devils’ would have been equally fitting) are a striking mix of Marvel Comics and Munch’s ‘The Scream, proving like last year’s the Boneless that there’s still a rich vein to be tapped when it comes to spinning a new web.
Direction-wise, newcomer Justin Molotnikov mines the kind of first person survival horror genre that helped reinvent the console game two decades ago, using dank lighting and switching viewpoints to create a growing sense of claustrophobic paranoia.  The small cast helps – each given a (very) potted biography by narrator Rasmussen – and while it’s nice to see the 38th century peopled by ethnic characters with regional accents, perhaps the decision to cast the show’s first transgender performer in the role of genetically stupefied grunt wasn’t the most enlightened of moves.  As a character though, 474 works fine – moving from ‘Planet of the Spiders’ Tommy backwardness to acceptance and ultimately heroic status – while Gatiss ensures that the discrimination she encounters and her whole disgusting nature as a purpose bred, unthinking army drone are never far from the surface.
What also works well is the depiction of sleep in the fourth millennium as an increasing hindrance to our evermore round-the-clock lifestyles.  The Morpheus machine supplying the same chemical refreshment in just five minutes that usually takes a third of our lives.  Of course, being Doctor Who with one eye constantly on the judgmental and cautionary, this is done for profit over nature.  As Rasmussen says, ‘Time is Money”, but Gatiss may be digging a little deeper even than that: his use of words such as ‘drones’ and ‘colonised sleep’ perhaps having more than a little sub-textual satire than would at first be apparent.  The Mr Sandman song likewise lends a nice little bit of uneasy creepiness, with it not only being a corporate jingle but also an encrypted means of getting from one secured area of the station to another.  As with the best of his previous work on the show, Gatiss’ talent lies in making the jolly ephemera of pop cultural icons – as he did with television way back in ‘The Idiot’s Lantern – both sinister and subversive.
For an episode which takes the bold – and indeed revolutionary – step of excising the show’s opening titles in order to maintain the ‘found footage’ suspension of disbelief, it’s a shame to be jolted out of that reveries not once, but twice right at the business end.  As Rasmussen’s scheme is fully revealed – providing the zenith of a particularly unsettling turn by guest-star Reece Shearsmith – it is a little disappointing to have such a clever conceit as the meta-narrative premise being spelled out so clearly for the benefit of viewers perhaps less blessed with making these cognitive leaps.  Yes, the whole video has been cut and edited to ensure the proliferation of the dust spores and to facilitate Rasmussen’s grand plan on a system-wide scale (one apparently to be returned to in the not too distant future) but do we really need to be told that we’ve been watching a story for the past forty-five minutes seeing as, er, we’ve been watching a story for the past forty-five minutes…?  Not for the first time this year has the viewer been so thrown out of the narrative just to make sure that those at the back are still keeping up.  And the second occasion?  Well, the presumably legally-binding obligation to have the ‘next time’ trailer and the cast & crew list, rather than fading to black as that icky shot of Rasmussen’s head slowly collapsing to dust plays out.
“Sleep, those little slices of death; Oh how I loathe them”, Edgar Allen Poe once wrote.  And while ‘Sleep No More’ may be yet another extract from the Doctor Who cautionary guide to interfering with nature, far more doom-laden portents are threaded through its narrative; not least of which being the increasingly borrowed time that Clara is living on.  But then that would appear to be a whole other entry from the Poe canon…
Next Time: ‘Quoth the Raven “Nevermore”’