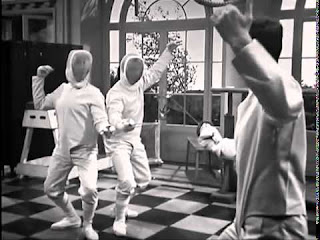 Adam Adamant’s fencing prowess gets a run out in this Avengersesque confection from the pen of Brian Clemens whose ability for intriguing ideas was let loose across several series during the Sixties and Seventies. On this occasion he conjures up a bunch of villains who offer to help financially strapped businessmen fake their death to avoid incoming tax demands only to deliver a genuine killer blow. Investigating Adamant discovers they all shared the same psychiatrist so he sends himself in under the guise of `Adam Smith`. Part of the fun of the episode is his attempts to pass off his detailed knowledge of the turn of the century as some kind of delusion and it helps that John Le Measurer is playing the role of listener with that careworn expression only he can muster.

Indeed there is quite a roster of familiar faces about including Deryck Guyler as a minister with a cold, and Arthur Brough as a rather jolly but dangerous funeral director.
Clemens’ sense of the interestingly absurd predominates especially in the arresting opening sequence in which a Sir George Marston is seen saying goodbye to his staff before climbing into a coffin and being declared dead. The coffin then turns up at the funeral parlour whereupon Marston sits up, says how good it is to be alive again and is promptly shot by Brough’s Mr Percy in a manner than would definitely not go down well at Grace Brothers! Thus the lively tone of the episode is set and Clemens even finds a slightly different way to work in that interminable flashback sequence.
The series still has trouble believably placing Miss Jones who seems to be used as a plot device rather than a character. It is a noticeable gap in what is otherwise a reasonably tightly plotted story culminating in some fencing between Admant and master swordsman Wilson around an entrance hall and staircase.


7 To Set a Deadly Fashion


A sort of James Bond lite affair in which Adam Adamant tries to stop spies who hide their monitoring equipment in expensive haute couture and promptly electrocute the unknowing carrier if it looks like they are being rumbled. The episode features Colin Jeavons giving it large as a prissy, temper prone designer Roger Clair who improbably is also the mastermind behind the scheme. He wouldn’t last ten minutes with 007 but thanks to Tony Williamson’s awkward narrative manages 50 minutes here. If he were French his name would sound like Rog Éclair which would top off a performance in which Colin hurls all his energies into rattling off every diva strop in the book. He ends up dangling from a coat hanger which in real life would not support anyone in such a manner.
This is not real life though and Williamson struggles to contain the elements he’s unleashed as Georgina again manages to nab a job in a few minutes despite no previous experience. On this occasion she is hired by Clair. After Adamant has his frankly weird valet Simms keep her in the apartment you think she’d just go home and not bother with him anymore. Juliet Harmer’s continued good humour does enrich the series but you do wish the writers would involve her more convincingly in the fun. 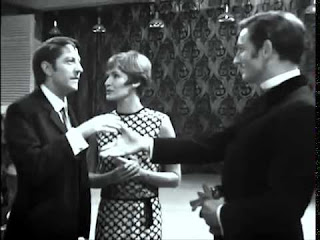 Needless to say Adamant is knocked unconscious twice though we only get that flashback once. He really should see a doctor after all the cracks he’s been getting on the head. Gerald Harper continues to make even the silliest plot seem a touch more tenable and here shows his humorous side as Adamant is appalled by the scantily clad models whom he can barely look at. If you’ve any knowledge of Harper’s life you’ll know this is seriously good acting something largely absent elsewhere in this caper.


Writer Richard Harris certainly possesses the larger than life approach of his actor namesake as this tale of government officials being duped into attending hedonistic parties in the subterranean cellars of a country pile then subsequently blackmailed proves. Rather than keep such an operation somewhat within the grounds of reason by having the events stage managed Harris suggests they really do sacrifice a girl during an initiation ceremony for Devil worship! Can we really believe that high up civil servants would be so naïve as to think “Oh this is great, I think I’ll come to every meeting.” As if spurred on by Harris’ devil may care attitude director Philip Dudley shows off filmic tendencies with tracking shots and dramatic angles emphasising the outré elements of the episode. The result is something both inherently silly yet oddly enjoyable.


Harris’ script is wittier than the series has hitherto attempted. Plenty of puns and melodramatic speeches are surely meant to lighten the load and make us believe in the unbelievable scenario. Even Adamant and Miss Jones’ repartee has an extra sparkle. It’s a pity the main villain lacks the necessary gusto. In a situation like this with masks, chanting and cloaks all over the place an enemy of outrageous qualities is required but William Dexter’s tepid Lord Perlman just isn’t up to the job.
Dudley’s busy cameras unfortunately pick up every wobbly wall to hand hence a struggle between Adamant and a henchman in a stone cellar becomes a particular victim. Adamant struggles and struggles to free himself when he could probably just pull the bit of the wall he’s attached to out. Still three cheers for the first episode in which, though our hero is rendered unconscious, there is no “so clever, but oh so vulnerable” flashback. As if to overcompensate the series’ other recurring trope outdoes itself when Miss Jones manages to bag a job as a maid at the country house in the space of a few hours. As someone once said, ridicule is nothing to be scared of and `The Last Sacrifice` follows that mantra from start to finish and is all the more fun for it.