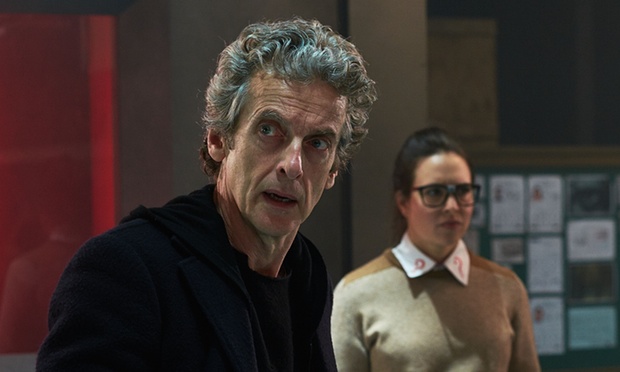 Science fiction always works best when it speaks of our own time, allows us to discuss matters in the world that would otherwise be the remit of dry documentaries or pointless political debates.  It is the window on our world that casts the harshest reflection.  And some of the greatest stories in Doctor Who’s time have grasped this opportunity and run with it.


‘The Zygon Inversion’ isn’t perfect, but then it doesn’t need to be.  Because for ten minutes it was more than perfect, it was an expression of hope in the most troubled of times.
Pick up a newspaper, switch on the news, scroll through your phone.  Fear and war and anger and suspicion litter our lives.  Migrants, radicalism, Trident, borders and bombs are the lexicon of our lives.  The End of History begat the beginning of another war, colder even than the one we were promised had brought all wars to an end.  The war with ourselves, with who we are, what we believe and who we follow; a war that is truly without end.
If only real life was as simple as a choice between truth and consequence.
But then, for most people it is.  But the world we live in – the world of political alliances, trade agreements, special relationships – that’s a world beyond you and I.  A world peopled by politicians and generals and accountants.  Making daily decisions that shape our lives while we are left to get on with living them.
David Cameron and Jeremy Corbyn both gave their answer recently to the Question: Yes or No.  One man who would and another who never would.  Truth or consequence, Yes or No.  If only Trident and the thousands of warheads primed, ready to one day fly, were as empty as the Osgood boxes.  A simple choice between life and death that wasn’t just the stuff of science fiction.
Doctor Who is littered with occasions when the complicated nature of politics was blended down to a simple choice.  The cold war and the nuclear arms race loomed large over the entire span of its original run; its revival arrived in the aftermath of 9/11 and the War on Terror.  New names for old terms, perhaps.  But if the wheel of conflict and bloodshed in the name of peace and prosperity really does turn like the Mara wheel, then what lessons can we ever learn?  Is Total War the only reality?  Is there ever really a simple choice between war and peace, life and death, yes and no?  Truth and consequence?
For every actor to play the part there is a moment that defines whoever is the Doctor in Doctor Who.  I won’t bore you with reminders of some of those times, but instead give thanks to Peter Capaldi for giving the kind of grandstanding speech that (if it hasn’t already) will have cemented him in the hearts of minds of everyone watching this evening.  No threats, no guns, no peace treaties.  Just the simple words of a man who has seen a dozen lifetimes worth of death in the name of colonialism, xenophobia and genocide, and been sat in the seat of having the power of life and death over entire species.  His species.  The man with the button.  The man who never would.
It’s a simple message, but then aren’t all the best ones just that?  No rhetoric, no agenda, no concession to militaristic intelligence or political chicanery.  And what do the winners of any war do the moment victory is secured?   What comes next, when nobody wins for very long anyway.  Wheel turns, civilizations rise.  Wheel turns, civilizations fall.
A choice between cruelty that begets more cruelty, or forgiving and forgetting.  One choice that escalates a situation.  One that offers an alternative.
If war is indeed a game played by politicians, then we know who these screaming kids throwing tantrums are.  And thinking really is a fancy word for changing your mind.  Like Enlightenment, the prize wasn’t the point.  The choice was.
Doctor Who has a rich history of polemical, political stories about the errors of mankind and the futility of war.  But rarely has it been such a potent piece of propaganda for pacifism in such troubled times.  If only the leaders of Amercica, Great Britain, Russia, ISIS and dozens of others were stuck in a room with just two boxes to choose from.  Boxes which are less about what they do than what they represent.
Of course the Osgood boxes are empty.  It’s never been about the contents, just the choice.  Always the choice.