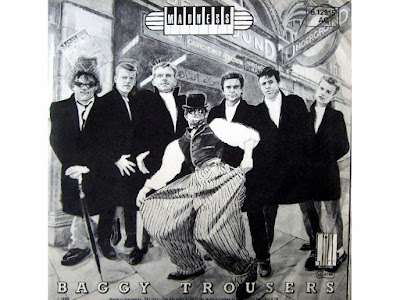 [A big wide shot of the Top of the Pops studio filled with a heaving throng throwing balloons around and dancing to Ottawan's D.I.S.C.O. which now seems to be on a permanent loop. The camera slowly zooms in before we cut to]
Tommy Vance: "Well let me tell you. Have we got a party or have we got a party? Hi everybody, I'm Tommy Vance and welcome once again to Top of the Pops. Aaaall... whatever is going to break out tonight, starting with this bit of a menu to see what's on the show."
Madness: Baggy Trousers [3]. This song's long slow drag up the charts hasn't been helped by by BBC4's two month break for the 2015 Proms. It first appeared on the 18/09/15 edition which was repeated back in July. Now Baggy Trousers has stalled at number 3, kept from climbing any higher by Ottawan and The Police. It turns out this isn't a live studio appearance, but a repeat from a skipped D*** L** T***** show which went out on 02/10/1980. Distractingly the rows of seating behind the band seem to be filled with the audience's mums.

Showaddywaddy: Why Do Lovers Break Each Other’s Hearts [36]. After a brief interview with Suzi Quatro we're on to Showaddywaddy but -oh no- the boys have ditched their multi-coloured Teddy Boy look and turned into Greasers. Everyone except for lead singer Dave Bartram; you'll have to prize his purple satin jacket out of his cold,dead wardrobe. What has Dave Bartram done to his hair? It looks like he's wearing Pepé Le Pew on his scalp. Oh! It was a wig.
Barbra Streisand: Woman In Love [9]. Flick Colby doesn't base her choreography around the wrestling scene in the Oliver Reed film of almost the same name. Woman is Love is a slow, sensitive song (ie, boring) so it's time to crack out the ballet style moves and put on the long, flowing dresses and. Time passes. It would have passed in any case. Look! It's Michael Palin. Here to plug Monty Python’s Contractual Obligation Album. Ottawan are silenced for a few blissful minutes and we can hear I Like Chinese as background to the banter between Tommy Vance and Michael Palin; personally I'd have gone for I Bet You They Won't Play This Song On The Radio. For some reason this whole evening goes unmentioned in Michael Palin's published diaries. Michael Palin then introduces the first Top of the Pops appearance of... 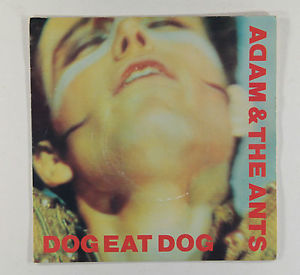 Adam & The Ants: Dog Eat Dog [37]. The coolest and hardest looking man in the world. If you are eight going on nine. My memory is that Adam (& the Ants, of course) took my world and shattered it into a million small pieces because they didn't look or sound like anyone I'd seen before. The discovery that sellotape across the nose made me look almost indistinguishable from Adam Ant was just the cherry on the icing on the cake. I loved Madness, Showaddywaddy, and now Adam & The Ants. This was the greatest edition of Top of the Pops ever.
George Benson: Love X Love [21]. David and Thereza (of Dollar, obv) are getting married "how much did it cost him?" Tommy Vance wants to know on seeing the ring, but Thereza doesn't know. Stop the presses! The greatest edition of Top of the Pops ever goes into a bit of a slump at this point. It's not really George Benson's fault, he's appearing on video so there's no way for him to know that the musical landscape has shifted.
Matchbox: When You Ask About Love [10]. Tommy Vance starts the chart countdown. Meanwhile, in the background an audience member in a white t-shirt with a green shamrock on the front gives a couple of self-conscious Hitler salutes. Bad Manners: Special Brew [25]. Ah! Bad Manners, they'll drag the greatest edition of Top of the Pops ever out of this George Benson/Matchbox induced slump. Buster Bloodvessel will start marching on the spot and sweating vigorously and all will be right with the world. What the? Buster Bloodvessel is sitting in a chair. Has he hurt his leg or is the beginning of a disastrous new direction for Bad Manners? A sudden edit flash and everyone on stage is wearing grass skirts, we can only pray that no gust of wind dislodges the thin vegetable matter covering which is all that stands between Buster Bloodvessel's dignity and a lifetime ban from Top of the Pops. Then, the song speeds up and Buster Bloodvessel leaps to his feet and he starts marching on the spot, and everything's going to be all right.
Number One: The Police, Don't Stand So Close To Me.
Closing titles: Ottawan, D.I.S.C.O. Again. Plus a few more Hitler salutes from shamrock shirt boy.
Performance of the week:  Adam & The Ants: Dog Eat Dog