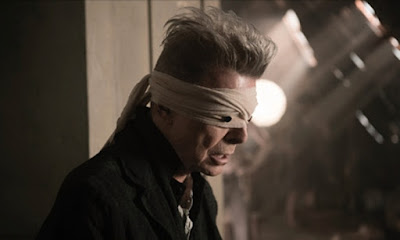 Once again David Bowie has proved capable of a musical left turn. We expect it of course but we never know what the direction will be. The surprise of 2013’s `The Next Day` was it’s unexpected appearance; the album itself turned out to be one of the singer’s more conventional (albeit excellent) releases not a million miles from where he’d left off a decade earlier.  Last year’s `Sue (or in a season of crime) was actually more of a marker for the future than we imagined though `Blackstar` is an altogether more fascinating composition. The video – directed by Johan Renck- is packed with imagery which might be symbolic or might be there because it looks great. Neither singer nor director seem willing to explain it’s secrets. Oh and it’s ten minutes long which in these days of short attention spans is the equivalent of releasing a 25 minute piece of music.

Whereas `Sue` had Bowie singing over a jazz rock workout, `Blackstar` uses that type of music more sinuously and the soundtrack is accompanied by electronic bleeps not unlike some of the earlier experimental Radiohead stuff. After several minutes there is a gorgeous shift into a `Where Are We now` type of middle section which itself is then pushed aside by Bowie in full on  preaching mode as his character who seems to be a blind preacher  talks about being “the great I am” before the melodies fuse back together for the climax. There’s a little hint of Gregorian chanting, some odd time signatures and even a slight return to drum n bass in the underpinning rhythm. Yet it also echoes some of his big ballads in parts. There’s even some saxophone. It’s an epic alright and seems powerfully effortless. Bowie’s in fine voice as you’d expect.
The video is the most startling he’s done since that period eighteen to twenty years ago which gave us such delights as the alarming imagery of `The Heart’s Filthy Lesson` and the jerky Union Jack bedecked creature of  `Little Wonder`. There is something of each of them here especially in the early sequences where Bowie sports bandages with buttons where his eyes should be and later on when he’s crucified like a scarecrow in a field. 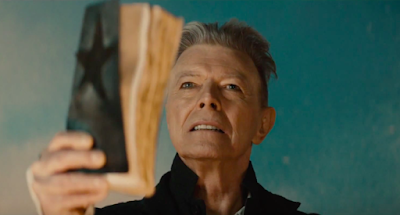 Exactly what’s going on is open to interpretation but suggests we’re flipping through the memories of a dying preacher whose former invincibility is now in tatters as he prepares to die. It opens with a girl who has a tail walking across a barren landscape and finding a skeleton in an astronaut’s suit, it’s skull festooned in jewels. She takes the head back to a Middle Eastern looking village while we intercut with Bowie, buttons amidst bandaged eyes.  Lyrics talk about an execution and perhaps the girl who finds the spaceman is far in the future. Is it the body of the preacher that is seen floating through space towards the star? Some people have already speculated that the astronaut is supposed to be Major Tom.
All told the music and visuals together are a work of art though unlike `Sue` you feel it would not be a chore just to listen to the song detached from the imagery. It suggests that the album, due in January, will be much more challenging than its predecessors ; producer Tony Visconti has already talked about how none of Bowie’s previous musicians play on it, replaced by young New York based jazz players.  It all goes to show that after fifty years David Bowie is still on fire.