Introduced by Chris Arnsby. [23] The Cure: Boys Don't Cry. Janice Long. “Hello and welcome to a very live Top of the Pops and to start us off tonight at number 23 it's the wonderful Cure and Boys Don't Cry.”
Robert Smith is in fine form. He's perfected a distracted amble round the stage which he uses to good effect during Janice Long's introduction. He wanders away from the microphone and it looks for a second like he won't make it back before the lyrics start but, of course, he does. What a pro. He's also wearing the essential item of 1986, a suit which is plainly too big. However it's less a fashion statement than a prop. He clutches at it, and twists it, and wrings it in his hands, and thoroughly incorporates it into the Robert Smith persona.

For those keeping count (ie, me) this is only the second live show of 1986, and John Peel's third of six appearances. Like a lot of the long term hosts he seems to be winding down now (or he's not being asked back as much). He'll clock up one programme in February 1987 and that will be it until December 1995 when he's invited back one last time as a pretext to get him on This Is Your Life. 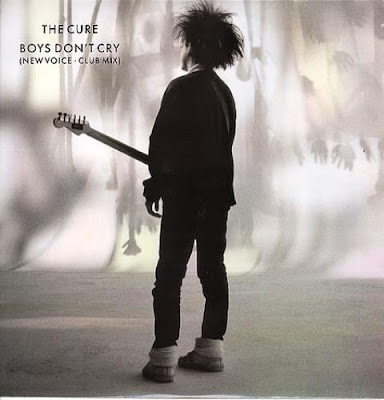 Janice Long. “Also on tonight's show, a bit of cor blimey with Chas and Dave, we've got Billy Ocean, we've got The Chicken Song as well, and Patti LaBelle and Michael McDonald.”

John Peel. “Unfortunately they couldn't be with us but they weren't too frightened to send a video.”

[4] Patti LaBelle & Michael McDonald: On My Own. On video. Will Peel and Long talk about the charts over Patti and Mikie? No. I can breath again.

[37] Matchroom Mob with Chas & Dave: Snooker Loopy. An irritatingly catchy song. It's also at least a verse too long, and the chorus could do with shortening; we really don't need that “pot the red and screw back...” quatrain every single time. Ultimately I'm sure Chas & Dave are not bad people, I just need to come to terms with my irrational desire to immure them in the catacombs.

The Matchroom Mob are Tony Meo, Dennis Taylor, Terry Griffiths, Willie Thorne, and Steve Davis. They're certainly not going to attend BBC Television Centre at 7pm on Thursday evening. They're all recovering from the 1986 Embassy World Professional Snooker Championship which only ended on Tuesday. Who won? Joe Johnson! You know, Joe “Snooker Balls” Johnson. The famous snooker player. He was Mister Snooker, in 1986.  And isn't part of the Matchroom Mob.

Sorry, where was I? Yes, the Matchroom Mob are not going to attend studio TC3 on a gloomy Thursday evening in May, so the director cuts between Chas & Dave (& the drummer) in studio and the Matchroom Mob on video. (John- Mick Burt was Chas and Dave’s drummer for over 40 years but I suppose Chas, Dave and Mick isn’t as catchy. Look, he ain't even on the cover which is dia-bolical. 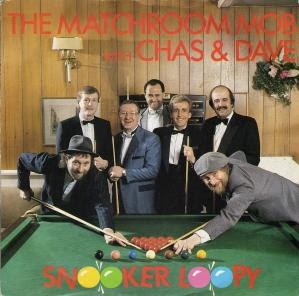 And who is sitting in the director's chair this week? It's funny you should ask. This week the part of Michael Hurll is being played by Blanketey Blank Producer* Stanley Appel. Where's Michael? He's away preparing for 9.55pm Saturday, 10/05/1986, and The Montreux Golden Rose IMMC Gala which will air on BBC2 between Leonard Bernstein at the Barbican  and, er, nothing because apparently BBC2 didn't like to stay up past midnight on Saturdays.

Top 40 Charts: Atlantic Starr [17] are still spelt Atlantic Star and they are joined in the charts by Suzanne Vaga [31] fresh from her tour of Kemble. Yet somehow the twin punctuation nightmares that are the B-52's [35] and Force M.D's [34] are both correctly rendered.

[11] Spitting Image: The Chicken Song. Top of the Pops started 1986 with A-Ha's The Sun Always Shines on TV. Was this ironic? 1986 is becoming the year of the TV spin-off single; Sue Pollard, Jim Diamond with the theme from Boon, the Grange Hill cast, The Young Ones, now The Chicken Song, and all the while, over in Elstree, the cast of Eastenders regard the charts with envious eyes.

I love The Chicken Song. There, I've said it. Like 1985's Frankie it's the pop love that dare not speak its name. I thought it was funny in 1986, the video still makes me laugh now. POP QUIZ! Who is the only real person to appear in the video for The Chicken Song? Answer at the end of the page. 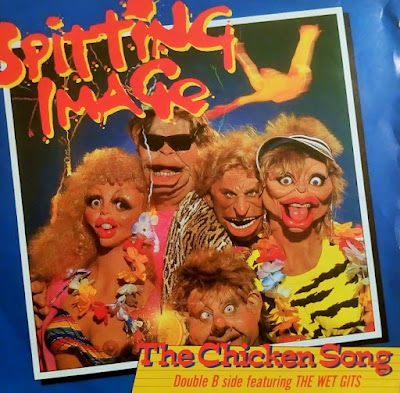 [27] Billy Ocean: There’ll Be Sad Songs (To Make You Cry). A dull song with a likeable performance from Billy Ocean, which is massively enhanced by some glorious sweeping crane shots of the studio showing the crowd illuminated by Lighting Director Clive Thomas. There's a terrific tracking shot just after the first chorus. The front row are packed together in silhouette, Billy Ocean is midground in a sea of dry ice, and behind him you can see more of the crowd fading off into the darkness on one of the scenery bridges. It makes the studio seem intimate and huge at the same time.

[1] Falco: Rock Me Amadeus. Falco has long since headed back to Austria, so this is a repeat from the 03/04/1986 edition. It really has been a long slog up the charts for Falco, kept off the Number 1 slot by the triple forces of Cliff Richard and the Young Ones, and George Michael.

[10] Whitney Houston: The Greatest Love Of All. Video and closing credits. Next week, Mike Smith and Simon Bates.

Performance of the Week: Falco, Rock Me Amadeus.

*and future Top of the Pops Producer, but he doesn't know that yet.

** It's David Bowie, on the back of the issue of Smash Hits seen at the start of the video.