Years and Years Episodes 2 and 3 reviews


The tone of this series may appear bleak- and certainly this episode’s main developments are that- yet the spark of humanity shines through. Set in the year after the nuclear explosion that ended the first episode it initially shows the Lyons getting on with life despite what happened. Yet peppered throughout are signs of a nastier, uglier society that proves to be the perfect platform for the political rise of Vivienne Rook. Emma Thomson makes great work of the role, the character’s fake sincerity and ability to play to the lowest common denominator is a trait we’ve seen from many a politician. It’s authentic but also a bit worrying how easily swayed crowds of people are. Recent events have clearly inspired her creation- there’s a whiff of Farage and even Trump about her notably when her lack of knowledge about tariffs is exposed at the hustings for a local election. Yet she bounces back with another of the series’ future tech ideas- and who knows the Blink as it’s called may well be in development today. 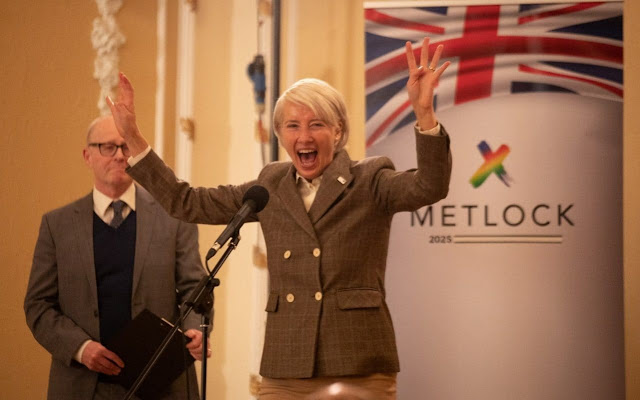 A pen like device that can instantly shut down internet and phone connections within a near radius is at the forefront of this episode’s slew of new ideas. We also get a phone implanted into a hand and a rather unfortunate launch of a drone business plus talk of medical advances that seem on the brink of curing long term conditions. Yet these things are at the periphery of what is essentially a family drama and this is displayed in an often warm- but not sentimental- manner. There is bickering, snide asides, yet also supporting, practical help.
Which both Daniel and Stephen need right now as they have difficult issues to deal with. Daniel’s ex husband Ralph has shopped Viktor to the Home Office for working illegally and within a day the latter is deported back home. If this seems an extreme act, it is pointed out that the policy is a reversal to what was actually happening in 2014. People deported in this manner have to appeal from abroad.
Even more seriously Stephen loses over a million pounds in a shocking bank crash that will have anyone who recalls the events of 2007 palpitating with the idea that it could happen again. Rory Kinnear is excellent as Stephen suffers while trying to remain calm still clinging onto hopes that the money may be safe. Like Daniel’s optimism over Viktor’s plight it is refreshing to have a drama so full of optimism. This rings true because life is like that- if you want a scene that encapsulates the Lyons its the joyous twirling around a bonfire after they’ve all drunk some of the synthetic alcohol returning Edith (an impassioned Jessica Hynes) has brought back. The liquid seems sort of like the synthahol they had on Star Trek The Next Generation though you never saw Picard and co behave quite as riotously as this. To be enjoyed too is the constant niggling between Anne Reid’s Muriel and T’Nia Miller’s Celeste, both politely acidic yet also rather similar in a way. You could watch them doing this for a whole episode!
The drama is consistently able to corral its bigger scenes too. Here, the panicked and angry customers trying to gain access to the fallen bank branches brings home the scale of the crisis. The sequence where Vivienne successfully gets the hustings crowd on side with a rant about “the filth on our phones” has echoes of the religious zealots that use trigger issues like this to galvanise support. Are they really concerned? Well you can see from Vivienne’s expression what her real agenda is. As if to nail the point, surely everyone’s favourite character, Rosie, is clapping and cheering her by the end. Now that really is scary. 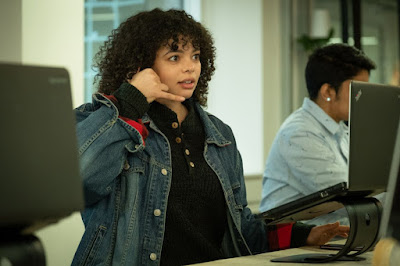 Episode 3
Technology and events take a more sinister turn in this episode with a sense of things hurtling out of control. Set against the backdrop of a general election we’re in 2026 where recession and technology are eroding the jobs market and it seems not unlike recent years. This of course is the secret of this drama which continues to echo contemporary concerns however far it steps into the future. You could see it as a warning in many ways and while Russell T Davies laces it with dark humour the odds are shortening. Victor’s restricted life and eventual last minute escape, Stephen’s multiple gig economy type jobs, Edith’s covert anti- business actions are all caused by an erosion of rights and opportunities. Its debateable whether it’s the tech or the recession that’s doing the most damage but when combined- either in Rosie’s sudden unemployment or the terrifying botched transhuman operation – the results are bleak. This episode’s future tech includes a self warming burger that’s not made of meat and a new form of cremation using water.
I sense that we are seeing the gradual dehumanisation of the Lyons family who deal with the death of their unseen father in a slightly bizarre accident involving a courier in unpredictable ways. Edith’s behaviour in the pub swallowing the contents of the small tube that contains some of the remains of her father is one thing but Stephen’s running over of a courier’s bike suggests he is headed for something of a meltdown. Rory Kinnear is outstanding in this episode as Stephen slowly becomes angrier and angrier at the turn of events partly due to guilt.  The courier motif runs through the episode suggesting perhaps that RTD is not a fan of home food delivery.
Vivienne Rook haunts the whole thing appropriately enough given her surname. Her 4 Star party ends up holding the balance of power after the election eliciting the only sensible thing she’s said. Unlike a certain party in real life she won’t form a coalition but proceed on an issue by issue basis. You see even the viewer is starting to warm to her now!