Reviewed by Chris Arnsby. Janice Long: "Hello. Welcome to Top of the Pops. Isn't it hot? We've got some great stuff tonight. Duran Duran and Echo and the Bunnymen. Simon Bates: "And what's more we're live from Studio 6 at Television Centre and to prove it here's Sandie Shaw with The Smiths and Hand In Glove."


[36] Sandie Shaw & The Smiths: Hand In Glove. The Smiths? What, as in Morrissey and Johnny Marr? Apparently yes. Who'd have thunk it? Apparently the pair approached Sandie Shaw as fans and after some persuasion here she is covering The Smiths' first single live on Top of the Pops. With some bonus writhing on the floor, for reasons that never become clear. The band are barefoot because that's how Sandie Shaw used to perform in the sixties. Well, Marr and Andy Rourke are barefoot. I'm going to take it on trust that the drummer is also is unshod. Meanwhile, Morrissey gets the night off.


Simon Bates is bursting with the news that tonight's show is live and coming from studio TC6. He can't believe it when Janice Long misses this vital information out from her introduction. All she wants to do is talk about how warm the weather has been over Easter 1984. Quite how Sandy Shaw appearing with The Smiths proves that Top of the Pops is live is anyone's guess.


[2] Phil Collins: Against All Odds (Take A Look At Me Now). On video. Clips from the film featuring lots of kissing, actors doing all the emotions (sad, happy, shouting, being thrown into drum kits), and lashings of Aztec iconography. Against All Odds, is presumably a more melodramatic remake of Q - the Winged Serpent.


[39] Belle & The Devotions: Love Games. Not to be confused with Sheila B. Devotion whose version of Singing in the Rain proved disco beats don't always make everything better; if you really want to remind yourself of this Lovecraftian horror then check out Top of the Pops, 06/04/1978. Belle & The Devotions are Le Royaume-Uni's entry into the 1984 Eurovision Song contest. I'm sure we all wish them luck as they head out to (*consults Google*) Luxembourg. You must remember 1983's winning song Si La Vie Est Cadeau (Is There A Cake In The Street). (John- Is that the same cake that someone else left out in the rain?) Anyway, good luck Belle & The Devotions in whatever the capital of Luxembourg is called.


[5] Duran Duran: The Reflex. Simon Bates introduces "Janice Long's solo," and then proceeds to talk all over her attempt to sing Happy Birthday to Roger Taylor in a way that can only be described as ungallant. Meanwhile, what's Simon Le Bon up to? He's caught out of position, putting something down at the back of the stage, when the camera pans across. We'll never know what it is because a silver haired man darts in and grabs it. 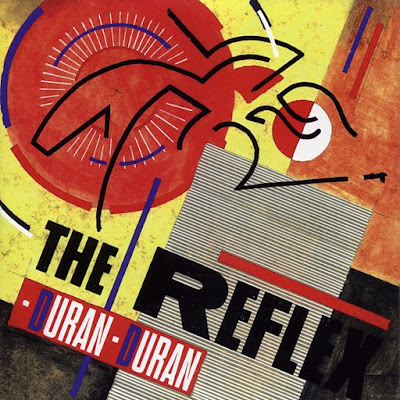 [35] Julio Iglesias & Willie Nelson: To All The Girls I’ve Loved Before. On video from the 1983 Country Music Association Awards Show, at the Grand Ole Opry House.


[30] Echo & The Bunnymen: Silver. Simon Bates is having so much fun he's forgotten to tell us the time. Luckily there's a chance for him to remedy this omission. "It's twenty two minutes to eight." Twenty two minutes to eight? I haven't put the dinner on yet. The picture quality is surprisingly murky on this performance. There are two massive spinning light poles on either side of Echo & The Bunnymen. I wonder if the BBC's current editorial policy on photosensitive epilepsy has been applied to counter Michael Hurll's 1984 policy of putting giant flashing lights all over the place?


[13] The Flying Pickets: When You're Young & In Love. An artistic split is brewing. The three Flying Pickets stage left have worked out a bit of choreography for the chorus, but the two on stage right are serious artists and spurn such frivolity. The one in the middle tries to compromise by half doing the arms-raised finger-clicking sway, but it's clear he can't keep the band together forever.


[1] Lionel Richie: Hello. The long version of the video, complete with the terrible clay head at the end.


[20] The Pointer Sisters: Automatic. Simon Bates is having microphone problems. The sound briefly cuts in and out making him sound like Norman Collier. Fortunately the sound doesn't cut out as he back announces the singer of the previous song, and names him Lionel Richard. There's an odd moment right at the end when Simon Bates and Janice Long pitch forwards towards the railing at the edge of the rostrum. It's not clear what happens but either someone lost their footing, or the group around the pair lean in to wave to the camera during the final goodbyes and make them lose their balance.