This high octane adaptation of Philip Reeve’s novel ticks a lot of cinematic boxes so it is puzzling as to why it ended up faring so poorly. Its been called a “steampunk Star Wars” (and worse) but Mortal Engines is not the dud its been made out to be, at least as far as I’m concerned. It looks fantastic, it provides plenty of thrills and spills and the setting is an interesting one. Yet somehow the film didn’t chime with the public which is a shame as my feeling at the end of it is that I’d have liked to see a sequel. Certainly this depiction of a dystopian world in the aftermath of a terrible `Sixty Minute` war avoids the usual clichés instead depicting what remains of the city of London. This version of the city though runs along on huge wheels swallowing up smaller wheeled towns like a predator, salvaging what it can and integrating the people into its own. Where it not written long before the word Brexit was invented you could mistake it for some sort of allegory about the issue though it certainly has something to say about our capital city. I’m sure the novel probably goes further in detailing the parallels because losing sovereignty of a city or even ideas is very much what the story is about. That this version of London is depicted as a ravenous beast that can never get enough resources from smaller towns to keep it moving certainly rings a bell! Someone does actually declare “we should never have entered Europe” when fuel is running low so perhaps this an early version of the Brexit debate (the story was published in 2001) but turned on its head. Here it’s not Europe that’s the problem – it’s London. 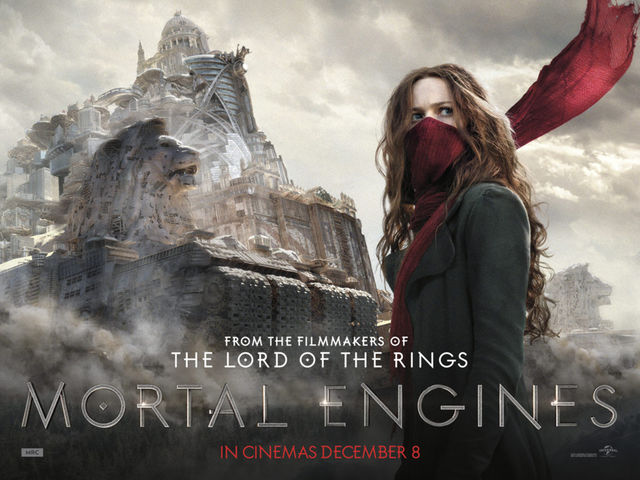 Shot in New Zealand, the movie opens in arresting fashion as London chases down a small mining town across the wastelands swallowing it up. One of its inhabitants turns out to be Hester Shaw, a young woman with a personal grudge against Thaddeus Valentine the city’s powerful Head of the Guild of Historians. Though the city still has a mayor its soon clear Valentine calls the shots. One of the apprentices in the museum he oversees, Tom Noseworthy, tries to foil Hester’s attempt at assassination leading to a thrilling chase through the huge metal cutters disassembling the captured town. At the end of this as he tries to stop Hester leaping through the garbage shoot, Tom finds himself pushed after her by Valentine whom she had accused of murdering her parents. This is a great opening to the film and sets up an intriguing set of circumstances.


As Tom and Hester form an unlikely duo on the outside Valentine’s daughter Katherine starts to unravel exactly what her father is up to with a big top secret project inside St Paul’s Cathedral. The plots draw together courtesy of a hybrid robot- human called Shrike and the Anti Traction league, rebels set up to defend against the `predator cities`. Its hard to think of a more cinematic concept and the film pulls it off in grand style. The visuals are awesome- the detail in this version of London evokes the city yet also the amount of energy needed to move it like this. Inside the museum there’s also amusing references to our time with things like smartphones, tablets and even a statue of two Minions amongst the exhibits. The exterior is equally impressive dominated by a couple of huge stone lions at the front. There’s also plenty of intereting items amongst the `old tech` that Valentine is seeking for his project. The attention to detail is present in the less showy things too; in Tottenham Court Station which houses a neat take on the Tube. Outside the effects work renders a bleak landscape and the moving cities are convincingly achieved. 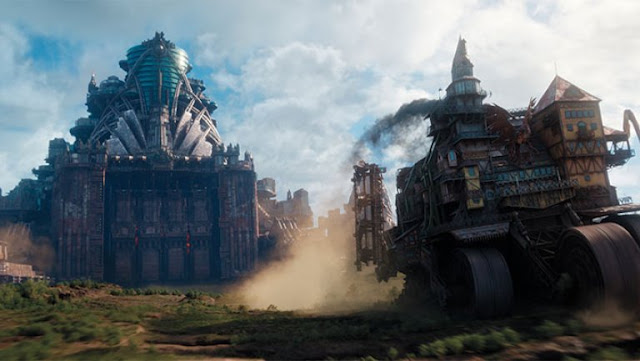 It is the case that the relentless pace of events takes some toll on the characters who could do with a little more time to breathe, especially Katherine who is absent from the narrative for some time (and the guy who helps her vanishes altogether) and doesn’t really get the moment you expect from her. Yet even within the maelstrom there are some strong performances from Icelandic actress Helma Hilmar who retains Hester’s inner strength throughout, Robert Sheehan who brings the zeal of discovery to the character of Tom and Hugo Weaving who manages to make Valentine one of those antagonists you can understand even if you don’t sympathise. The most remarkable character though turns out to be Shrike whose Terminator style appearance (metal skeleton, glowing green eyes) initially becomes a villain who can’t be stopped. Yet as the story progresses he become something more and along with the moving cities is the story’s most intriguing idea. Stephen Lang brings his experience to a role that requires some surprising turns. 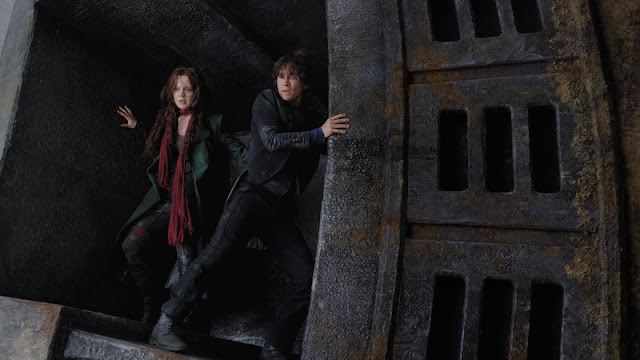 The climax in front of the Shield Wall in what was China is a little haphazard at times yet encompasses enough moments of jeopardy and spectacle. Anytime the `ultimate weapon` is wheeled out at a movie’s climax we might feel short changed though at least with this one the groundwork has been laid during the proceeding action. This is probably not for people who might challenge the science and start to say “but how can they do that…” however I really like this film whatever the critics say and if you’re willing to accept the concept then it is definitely worth watching.