Reviewed by Chris Arnsby. Steve Wright: "Good evening!! Welcome to another Top of the Pops with me and 'im!!" Mike Read: "That's right. We're going to kick off tonight with Orchestral Manoeuvres in the Dark. This is a great track, Locomotion."
[6] O.M.D. :Locomotion. Michael Hurll is contractually obliged to bring back Steve Wright for the second of his six appearances this year. I've got no idea what the criteria are for using Radio 1 DJs on Top of the Pops. A quick glimpse at the schedules for week beginning Monday 30th April 1984 suggests the only name missing from the regular weekday roster is Adrian John.
He presented the antisocial 6am to whatever-time-the-big-name-breakfast-show-host-can-be-bothered-to-get-into-the-studio show; in 1984 this was Mike Read (7am) but sometimes the start of the breakfast show drifted back to 8am. Adrian John appears to have held a death grip on this slot and hosted it more or less constantly from 1982 to 1993 before he packed it in to spend more time with his pillow.
Presumably the only thing stopping Adrian John from hosting Top of the Pops was the logistics of getting up stupidly early in the morning the next day. He does crop up on a few editions (normally the big party ones hosted by multiple DJs), watch out for the pale exhausted bloke propping his eyes open with matchsticks. Adrian John is not to be confused with Adrian Juste who hosted a weekly Sunday radio show, and is absent from Top of the Pops because he's terrible.Meanwhile, here's O.M.D. Andy McCluskey has worked out a Flick Colby-esque literal interpretation of the lyrics. How many can you spot? There's a sliding hand gesture for "walk down the sidewalk," a scurrying motion for "run down the boardwalk," wobbly hand wave for "sail across the seaways," and a brilliantly corny point-into-the-camera for "can't say no [POINTS] to you." 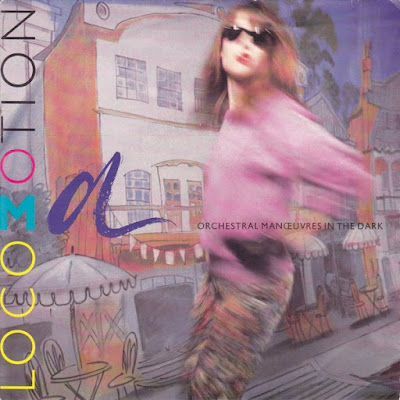 [8] Blancmange: Don't Tell Me. Blancmange have been to Valencia on their hols and while they were away they've made a video.
[18] New Order: Thieves Like Us. "Playing live, and singing live," says Mike Read. *Sgt Wilson voice* Do you think that's wise? Remember what happened last time? Actually, this performance is fine. It's better than the 1983 performance of Blue Monday and that's it's weakness. It's just not as memorable. It's possible Mike Read's emphasis on the word live is to reassure the home audience that the band are alive. Gillian Gilbert displays a startling lack of animation. Don't confuse this song with Spies Like Us. That won't arrive until 1986.
[28] Kenny Loggins: Footloose. On film. Kevin Bacon, Kevin Bacon's dance double, and two gymnastics doubles. That's four degrees of Kevin Bacon in one short sequence. (John- You mean he didn’t do all that himself? We’ve been cheated for 35 years!! I bet that’s not even him playing squash in the latest EE advert!)


[25] Jocelyn Brown: Somebody Else's Guy. A good song which loses points for hitting the rhyming dictionary too hard in places. Lie: alibi. September: remember. Good job this relationship didn't break down in August.  Steve Wright has worked out that Brown rhymes with get down, and also [chart] count down. He's so keen to use this bit of clever banter in his outro that he forgets the name of the song, and calls it Somebody Else's Baby.
[19] The Human League: The Lebanon. Phil Oakey has gone for an ill-advised image change. He looks like Ian McShane's unconvincing stunt double. The sheer ghastliness of the new look (leather jacket, stubble, and -oh god- a mullet) detracts from the song. It's notable that Steve Wright isn't trusted to do the chart countdown. The normal procedure is for the two hosts to alternate but this week Mike Read handles all three sections. There's an odd moment at the start of the Top 10 when Steve Wright, in what seems to be a pre-recorded voice over, says "terrific... down at ten," before Mike Read suddenly cuts in over the top. Did Michael Hurll get Mike Read to dub over Steve Wright's countdown? Surely not.


[1] Duran Duran: The Reflex. On video from the Maple Leaf Gardens in Toronto.
[14] Nik Kershaw: Dancing Girls. Closing titles and some uncertain dancing from the crowd as they try to shuffle along to the sound of a xylophone falling on Nik Kershaw's keyboard.
Performance of the week: O.M.D. :Locomotion
Plus, as a special bonus, after Performance of the Week week mysteriously went missing from the bottom of the 26/04/1984 edition (i.e. I forgot). Duran Duran: The Reflex