Reviewed by Chris Arnsby. David Jensen: "Well hi there and welcome again to Top of the Pops. Hey! Long time no see." John Peel: "Yes it's been a long time since we last did the programme. Fact there's been a lot of changes. These days he's John Peel and I'm Kid Jensen." David Jensen: "And this is Belle and here's The Devotions."
[12] Belle & The Devotions: Love Games. John Peel is right, it's been nine weeks since the pair last presented Top of the Pops, 01/03/1984. They were scheduled to present the 05/04/1984 show which was sacrificed to resolve the scene shifters strike. The Top of the Pops presenters schedule like the Mayan calendar cannot be easily altered and once Peel and Jensen lost their April slot they just had to wait for the next epoch to roll round. David Jensen kept the wolf from the door with a Radio 4 documentary. Soundings, in which he probed the morals of young church goers to see if they are "different from the public statements of the churches they attend." Fascinating, please tell me more at 6.15pm on 29th April 1984. (John- Or; look there’s some wet paint drying right over there) What was John Peel doing during this nine week lost weekend? The best he could look forwards to was a Roundtable in the Radio 1 Roadshow caravan at Angel Hill, Bury St Edmunds. Part of the Radio 1 in East Anglia season in which a bevy of DJs looked east and travelled round Cambridgeshire, Norfolk, Suffolk, and wherever Bury St Edmonds is; in the second week of March*.
Belle & The Devotions are fresh from their triumphant seventh place victory in groovy metropolitan wind-swept Luxembourg. Sweden won with a song called Diggi-Loo Diggi-Ley. Belle & The Devotions placed lower than a band from Denmark called Hot Eyes which sounds like a medical complaint.(John btw it came seventh in the Eurovision Song Contest and this was seen as a disappointment. Cripes! We'd love a seventh place finish now!) 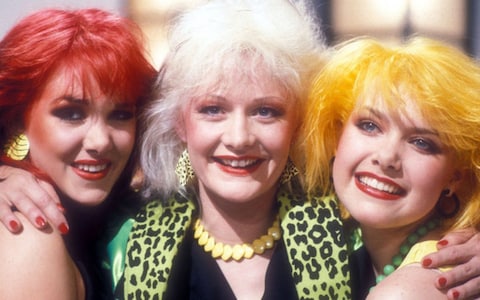 [3] Queen: I Want To Break Free. On video. (John- Iconic video though surely? What I like is the way it allows John Deacon to look thoroughly fed up and disapproving which you sense he often was)
[7] The Flying Pickets: When You're Young And In Love. John Peel introduces The Flying Pickets. David Jensen has been substituted out for a man who has been stripped to the waist and oiled. I'm sure it will all make sense later. The Flying Pickets have come in their pyjamas (grow up). The band are dressed in their nightwear like how they livened up performances of Only You by dressing as the vaguely six Dr Whos, snowmen, and flying pickets in donkey jackets. On balance I think When You're Young And In Love is a worse and more boring song than their cover of Only You.
[6] Bob Marley & The Wailers: One Love-People Get Ready. "Now it's spot the celebrity time," according to David Jensen. Okay we've got; the World's End estate; Lots Road power station; a sign for estate agent Barnard Marcus; a clip probably from Bootle Saddles on the TV at one point; and weirdly what looks like the Sinclair ZX Spectrum logo on a contact lens shop.
[28] Terri Wells: I’ll Be Around. A solid performance. Terri does a professional job and the audience dance along. At one point there's an unusual shot which must have been taken from the studio gantry with a hand-held camera. In the background you can see the neon Top of the Pops logo and it gives an idea of the geography of the studio and the way the various stages all interlink. That all I've got. Oh. Have a look at the cover of the single. It almost typifies eighties design. There's high contrast stark angular block letters for the T and W of Terri Wells; with the rest of her name spelt out in a fussier lower contrast curved font; non-geometric pastel graffiti smears (hot pink and neon blue, but dulled down a bit to avoid frightening the horses); and the name of the single is spelled out in lower case letters. becos its kool.
(john- Here It Is…) 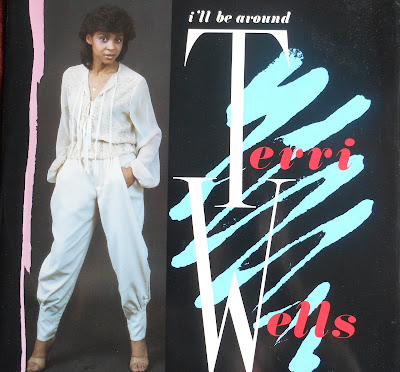 [4] The Pointer Sisters. Automatic. Here's a mystery. When Top of the Pops previously showed clips from the Automatic video, 26/04/1984 edition, they were smeared in Quantel effects. Those effects are now gone and they're not on the official copy of the video on Youtube (at least not until the instrumental when it starts looking like Ruth Pointer might turn into Colin Baker). Did Michael Hurll just add them in because he thought the video was boring? Apparently yes, because this time the video is interrupted by footage of the oiled man staring deep into the camera and body popping. There's also a dancing robot and two men waving fans. It's a brief return to the early days of Zoo when the troupe would not so much dance as curate a multimedia happening in front of the cameras. I hope some stage hands mopped down the podium after the oiled man had done "the worm" all over it, it's now a slip hazard.
[1] Duran Duran: The Reflex. Saturday Superstore, or somesuch programme at the time, went behind the scenes of The Reflex video to find out how they did the special effects for the wave that comes out of the screen. The bathetic answer was that a couple of technicians animated a wave which was added to the concert footage in post-production. This may or may not have been done with the assistance of a computer. My memory on the subject is vague.
[24] Jeffrey Osborne. Stay With Me Tonight. Crowd dancing and credits. There's the fan men. There's the robot. Where's oiled man? Has he gone home dressed like that?
Performance of the week: The oiled man? No? Unfortunately this is a week where none of the studio performances are particularly great. If I have to choose one then I guess I'm going to say.... oh... Terri Wells: I’ll Be Around. But personally I'm going to cheat and say The Pointer Sisters. Automatic on the grounds that this is the song I've been humming while trundling round Sainsbury's.
*but get this, Newsbeat that week was presented by Frank Partridge. Radio 1 in East Anglia must be Alan Partridge ground zero.