How to take the career of one of pop’s most flamboyant performers and bottle it in a format that will fit in a two hour movie is no small feat. Well, Dexter Fletcher’s done it. His dazzling, exciting take on the legend that is Elton John is such a good film that it left me with the idea of seeing it again. And that doesn’t happen often. Eschewing a year by year career trajectory (there are great leaps, ardent fans might find them too great) or even musical continuity (the story stops in 1983 but there are songs from beyond then) Fletcher and writer Lee Hall instead make magic. They use the basic facts, the essence of the story and fashion what early promotion called “a true fantasy”. Course, if you don’t actually like Elton’s music this is perhaps not the film for you but you still might be surprised. For those of us who do those songs are deployed with precision – and often in surprising ways- to support the narrative. It definitely takes more chances than Bohemian Rhapsody -with which it is inveitably going to be compared- and they pay off in a big way. 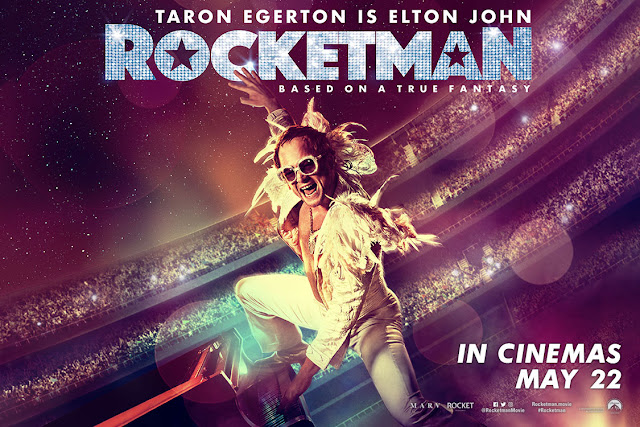 The arresting opening sequence is when you know this is going to be good. Two doors swing open and a figure framed by light strides towards the camera. He is clad in a sort of orange spandex affair with two devils horns. You imagine we’re going to kick off with an on stage scene of Elton in his pomp but when his destination is reached it turns out to be a therapy group. To say he looks out of place is a grand understatement! These sessions are the framing device the film uses to tell it’s story; we return periodically and as we get to the kernel of the man so the costume comes off bit by bit leaving him by the end in an ordinary tracksuit feeling cleansed. In between is a film that whizzes along with sprinklings of wit, some fantastically staged visions and a superb cast.
None more superb than Taron Egerton who, without doing an impression, captures the good and bad sides of Elton to a tee. Whether its tantrums or tiaras, the actor is on point, formidable yet vulnerable. It’s a performance elevated by the fact that he actually sings the songs too. Again he doesn’t attempt a copy but the rhythm of the songs makes him sound incredibly like Elton at times and, though I hope the great man doesn’t read this review, I’d say he has a slightly wider range. Sorry, Elt. Many of the songs are re-arranged, souped up and dusted off with a freshness that shows how strong they are.
The John was involved in the movie and this set some people’s alarm bells ringing that the result would turn out to be a sanitised version, but it definitely is not. During that first therapy session, Elton lists all the addictions he wishes to admit to and we see each of them unfurl during the film. Espcially notable is the way it treats Elton's sexuality without applying modern views. Likewise drugs. Again Taron Egerton hurls himself into this with gusto and utter conviction. Neither he nor the writer nor director (nor presumably Elton himself) are interested in making the pop star admirable or nice. It’s warts and all yet it ends up as the way in which we can see him as a real understandable person who just happens to be a multi millionaire pop star. In some ways his trajectory is very much that of a rocket that cannot be altered or stopped.  How would you or I react to such a scenario? Probably similarly. 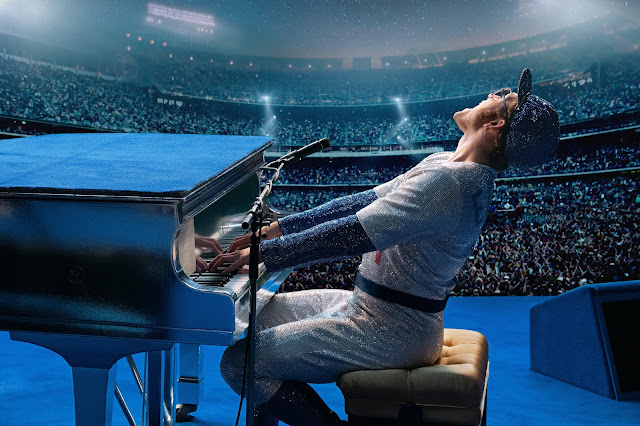 If there’s a person who does emerge as the film’s quiet hero its Bernie Taupin played generously by Jamie Bell. While Taupin does initially fall for the hedonistic lifestyle both are hurled into he knows when to pull back and go home yet he is always there to offer sage advice to his co-writer, “my brother” as he calls him. The chemistry between Taron Egerton and Jamie Bell is wonderful and you can believe they really did write so many great songs. On the other hand the narrative presents several villains from Elton’s point of view- his distant father, his demanding mother and the cold hearted John Reid, at one time his lover and for longer his manager. In each of these relationships you see Elton doing more than he should to please them in different ways.
There are plenty of great performances to be found in the rest of the cast too from Bryce Dallas Howard’s pushy yet sometimes nonchalant mother, Steven Mackintosh as his father Stanley who seems to be staring into the middle distance half the time. A later reunion when Elton sees how affectionate Stanley is with his new family is an emotional punch to the gut. Gemma Jones is there too as Reg’s sympathetic gran, the only member of the family who seems to support him.  Richard Madden imbues John Reid with the demeanour of a neatly attired assassin, a performance that must have been difficult given all the mayhem around him! Stephen Graham also delivers a surprise as the very non Liverpudlian Dick James whose assistant Ray is full of enthusiasm for the music conveyed so well by Charlie Rowe.
The early part of the movie deals with Elton’s childhood as Reg Dwight – with a couple of great youngsters playing young Elton- Matthew Illesley and Kit Connor - and you see right away how Dexter Fletcher is going to use the songs. An early standout is `I Want Love`, told from multiple perspectives by members of the family while a simple rendering of `Your Song`  turns into film gold simply by watching the reactions of the others, especially Taupin. Even a more obvious intepretation of `Saturday Night’s Alright For Fighting` proves an ingenious doorway to several passing years.
As the career rockets, the fantastical ideas get wilder- a levitating audience, a song performed underwater and ultimately Elton as an actual rocket! There are so many of these imaginative scenes, especially early on, that you can’t get enough of them. Even when the story grows darker, as Elton’s addictions start to wear him out, the bold visuals keep coming and the story stays on track right to the end which sees Elton post clinic getting back to being himself again. 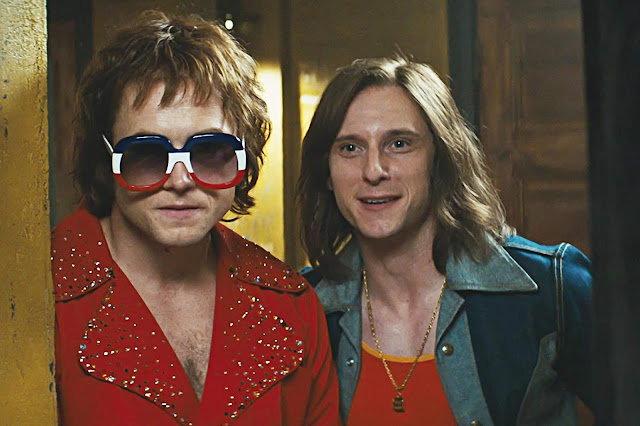 Some may miss forensic details for example while the song `Goodbye Yellow Brick Road` is used to powerful effect in the narrative, there is nothing on the making of the album but for me this is fine. If you want an album by album story there’s plenty of documentary stuff out there. What the movie does achieve is take us on a ride into fame and fortune, both the good and the bad. As Elton becomes one of the biggest stars in the world there is something fake about the huge cars, the mansions and the often ludricous costumes. And there are moments when it seems he realises this too. Quite brilliantly after all the re-staged and re-imagined things we’ve witnessed a valedictory `I’m Still Standing` is a note for note reproduction even to the point of inserting Taron Egerton’s Elton into the original promo video. Its like they’re saying how things have got better.
There is just enough detail to tell the story and more than enough cinemagic to make it absorbing, funny, eye popping and occasionally heart breaking. It is certainly bold of Elton John himself to allow an often unflattering and sometimes revealing portrait to be seen especially as its stuff he’s left behind. For me, Rocketman is the outstanding film of the year so far. 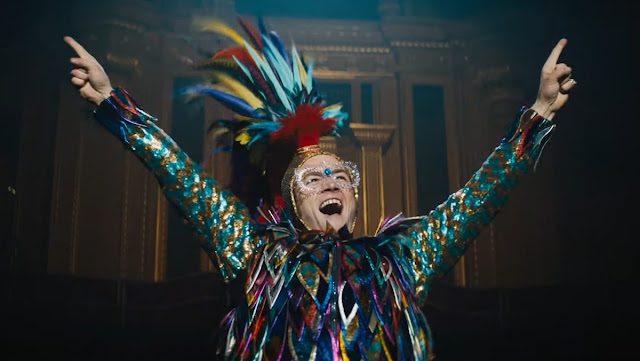 Rocket Man- the song
It’s a significant entry in Elton John’s canon is `Rocket Man` as it was the huge hit which kicked off his imperial period and also inspired the name of his record company plus it played into a prevailing interest in space travel in the early 1970s. In a strange spacey twist producer Gus Dudgeon had also helmed David Bowie’s `Space Oddity` three years earlier. Bernie Taupin’s lyrics are said to be inspired either by the Ray Bradbury story of the same name or by him seeing a shooting star.
I’ve always had a niggle about this song though feeling that it has a missing line of lyrics at the end of the second verse. After he sings “It’s just my job five days a week” the next bit sees Elt simply repeat “Rocket man, rocket man” which sound like placeholders as if he was waiting for words Bernie forgot to send.
It’s a tricky one as the lyric has said all it needs to say but I thought it would have been interesting to add a slightly out there proposition “And even when I’m on the ground, I never really land”, So the lyric would go -
And all this science I don't understand
It's just my job five days a week
And even when I’m on the ground, I never really land
I’m no Bernie Taupin and it’s a bit abstract but it does scan and fits in with the out there vibe of the song!