There are 13 episodes in season 2 which was shown in 1967 but unfortunately only two survive, the rest perhaps cryogenically frozen in some underground bunker or maybe Miss Jones borrowed them and forgot to bring them back. The duo which do survive suggest that the season had a more varied tone and was a little more macabre. Multiple episodes feature Adamant’s nemesis The Face who talks like an Ice Warrior from Doctor Who and dresses like someone with a rubber fetish. He seems to pop up with various fully formed plans week after week with little explanation as to how he affords it or who in fact he is. Perhaps these revelations are in one of the many missing episodes.

The first of the survivors is Black Echo, a melancholy change of direction from the first season concerning a Duchess whom Adamant knew back in 1901. Now an elderly woman claims to be her and more pertinently wants her fortune. The Bank of England call in Adamant to verify her identity but for him the reunion turns out to be bittersweet. The show may be built on a fantasy premise but its content has generally been of The Avengers style of exaggerated England. Yet Adamant’s enemy, the man who condemned him to his decades of sleep is something else altogether. Seen again here for the first time since the first season opening he resembles some kind of lizardy alien. Thus his whispering presence sits uneasily with the romantic subtext of the episode in which Adamant want to believe the Duchess is the woman he once loved but is befuddled both by her great age and her duplicitous plan. It’s a talky episode but once it reaches a strong conclusion ably abetted by Gerald Harper who conveys the range of emotions required with skill.  Director Moira Armstrong assists the production with her usual panache resulting in an atypical episode that thankfully avoided the cull.
The second existing episode and in fact the final one of all is A Sinister Sort of Service which is right out of The Avengers casebook. A supposed security organisation is masterminding crimes using a computer. The spree is causing government concerns and seems to be carried out by a gang wearing goggles for no apparent reason unless they go for a communal swim afterwards.
The company is called Surveillance Security which of course is SS so they are togged up in black uniforms complete with a very Nazi alike symbol on their lapels. They even do an approximation of the Nazi salute while head honcho Jason Lang has a very large photo of himself on the wall. The only other person I’ve seen who does this is Marco Pierre White in all his restaurants.
While all these elements may seem hokey to modern eyes, it was made in 1967 and many of the ideas have been recycled in various films and tv series since including the idea of inviting the hero into your lair to tell him your plan and then not guarding him properly. There are some good points too; notably Simms getting in on the action and scenes celebrating Adamant’s 100th birthday. A good one to finish on.
Little seems to be known about the missing episodes though IMDB mentions one in which Simms’ mother is arrested for disturbing the peace which sound like fun. What Adam Adamant Lives tries to do is beyond t’s resources yet the enthusiasm of the cast and in particular Gerald Harper, some interesting directors and a sense of the absurd makes it a worthy addition- if not a pioneer- of those bizarre Sixties shows that refused to be hemmed in by genres and categories. 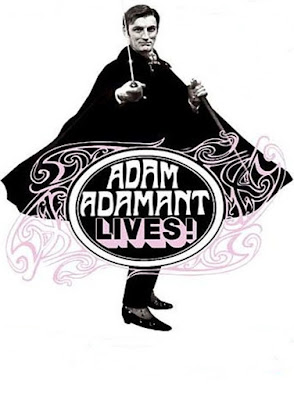