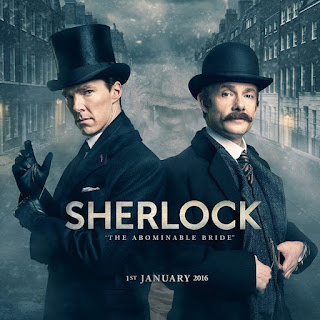 BBC1 1 January 2016
Reviewed by Sean Alexander
Given its literary roots and the iconic film and TV adaptations over the years – take your pick from Basil Rathbone to Peter Cushing to Jeremy Brett to Johnny Lee Miller – it seemed inevitable that the makers of arguably Sherlock Holmes’ most significant pop cultural makeover would one day take advantage of one of its now standard sabbaticals and embrace the Victoriana.  When paparazzi photos emerged early in 2015 of stars Benedict Cumberbatch and Martin Freeman in full period dress, deerstalkers and capes as standard, speculation inevitably grew as to how Sherlock’s makeweight Christmas special would dovetail into a continuity left precipitously poised at the end of its third series and that viral meme erupting across phones, tablets and TV screens across the nation.  Would they travel back in time by TARDIS?  Was this a dream, an old case conducted by a hitherto unmentioned ancestor, or just a standalone jaunt into the aesthetic of Conan-Doyle before resuming normal service in 2017?  Amongst all those social media debates I’m pretty sure hardly anyone suggested that it would try to be all three.

It’s hard to be objective about Steven Moffat’s output these days.  The one time darling of Doctor Who fandom has pretty much split those same adorers down the middle, as the burden of show-running not one but two of the Beeb’s ‘crown jewels’ barely gives him time these days to say good morning to his family.  Nobody, least of all Moffat and writing partner Mark Gatiss, expected their 2010 vanity project to become as great a geekdom behemoth as Doctor Who, but after a second series that nominally killed off its protagonist with seemingly no escape plan it was pretty safe to say this side work had eclipsed even the Time Lord’s supernova.  Cumberbatch was the unlikeliest sex object of the decade, and pages of online speculation were devoted to how Sherlock could possibly have escaped his modern day Reichenbach fall in order to stand enigmatically over his own headstone.  Phenomena like this don’t come along very often, especially ones which took pretty much everyone involved by total surprise.
The fallout – not to mention hangover – of all this was that Cumberbatch’s name was suddenly on the speed-dial of every film and TV producer in the country, nay the world.  If Michael Caine once got ridiculed for making at least five films a week and two at weekends, that same media copout was being attributed to Britain’s hottest TV and film star, but this time with more than a grain of truth behind it.  Cumberbatch seemingly has still some way to go before peaking, both in terms of his output and his popularity with an ever growing audience, and whatever limit his star may one day reach it’s safe to say that – right now - it’s still some time off.  Good for him too, but bad for Sherlock’s ever growing (and ever vocal) hardcore fandom, who soon had to resign themselves to three new episodes every two years, or even three.  Which may say more about why ‘The Abominable Bride’ comes across as a desperate attempt to sate the appetites of the many whilst pleasing so few.
Where exactly at the script writing stage that the decision to fall out of the Victorian world and back onto that private jet only just recalled from Eastern bloc exile is one for the TV historians.  But I’m going to hazard a guess it was always meant to be there.  By writing a Victorian version of their modern-day take on Limehouse’s most infamous of sleuths, Moffat and Gatiss had a clear choice: embrace the past and leave the present on hold, or try and tie things up with the narrative that had got most of the country watching in the first place.  The first and, for me, most crucial problem is that they tried to do both: have their Victorian cake and take a bite of series four while eating it.  It is of course inevitable that having seen the final product the temptation to at least leave strands hanging to be taken up in 2017 was too great, but the success or otherwise of this bold attempt to layer narrative within narrative with little more than the tried-and-trusted ‘dream’ device has certainly provoked the inevitable bipolarised debates among the Twitterati.  But to be fair the long-term amongst us have already been here before, as Sherlock’s post-resurrection year similarly split those who wanted more of the clever plotting and carefully constructed investigative procedurals of years one and two, and those who were quite happy to see episodes largely devoted to the bromantic subtext of the show’s leads.  But for a show that only produces four and a half hours of new television every other year that is a challenging task.
Okay, let’s at least look at what is nominally Moffat and Gatiss doing Conan-Doyle in its purest, literary form.  ‘The Abominable Bride’ certainly enjoys all the sights and sounds of smoggy London, and handles its tropes and devices with suitably accomplished flair.  Here is a Holmes and Watson familiar, yet different; the good doctor is now seemingly the airbrushing writer who elevates his muse from ‘unprincipled drug addict to gentleman hero’, while his BFF’s cold, emotionless approach to both his life and his work is resonant of the best of his film and TV predecessors.  Cumberbatch is clearly a fan of the Rathbones and Bretts of yore, and you’d be quite happy to see a whole series of these retro jaunts in place of the regular narrative.  The eponymous bride’s campaign for women’s rights and the then hot potato of the Vote offers a neat, even feminist slant on the otherwise Victorian world of patronising egotists.  The invisible army of wives, mothers and servants rising up against their year dot suppressors is timely and – given Suffragette’s likely inclusion amongst this spring’s Oscar nods – fresh in the audience’s minds.  But it’s a narrative subtext that is nevertheless flawed on occasion by one or two points that could easily have been ironed out at scripting stage; namely, why make Molly Hooper’s morgue based social climber such a farcically bad piece of comedy cross-dressing, and who in costume actually though that the invisible army’s secret coven should dress in a purple-ised take on the Ku-Klux-Klan?

But these in the wider context are faults that could, and should, have been avoided.  Of more concern is how ‘The Abominable Bride’ seemingly runs out of plot before the hour, leaving Moffat and Gatiss little choice (at least in their mind palaces) but to kick-start the next series by relocating events back to the present day, relegating 1895 and all that to the status of Sherlock’s drug-fuelled meditation into how the bride, like Moriarty, could have possibly survived a bullet through the brain.  I’m sure there’s one or two who groaned alongside all those who cheered to see their modern day heroes back in harness.  But where exactly does that leave the episode’s central mystery, the bride who seemingly has come back from the dead to take bloody revenge on her male oppressors?  Well, nowhere really, because at this point all attempts to fake a Victorian reimagining of a modern reboot becomes just so much baggage to the more important stuff of giving Andrew Scott’s Moriarty further post-mortem screen time and further milk the show’s mythology to already indulgent levels.  All this stuff about Sherlock – apparently already on a bender when he was saying goodbye to John and Mary – and his tune in, turn on, drop out descent into trippy mind palace face-offs with his mortal (perhaps immortal) nemesis is all so much fanwanky guff, written by two men clearly having too much fun without putting the brakes on.  And it does, like the man himself says at one point, all get a bit silly from hereon in, as the drag theme continues with Moriarty revealed as the blushing bride, before both are relocated to a fan-pleasing (and completely inscrutable) trip to the Reichenbach waterfall where their flipside relationship is gate-crashed by a meta appearance from Watson, now seemingly conscious of being a construct in this Russian doll narrative.
All this would be palatable if it at least made some sense.  Surely once Sherlock does indeed wake-up, the whole Victorian venture should just end…but instead we get a mid-credit sting in which Conan-Doyle Holmes and Watson all but break the fourth wall and in doing so suggest that they have an actual existence outside of Sherlock’s drug-addled mind.  Nonsensical?  Probably.  Hugely self-indulgent?  Most certainly.  And not without just a hint of Moffat, in particular, ploughing the same furrow as he did only a year ago with his similarly Inception aping Christmas episode for Doctor Who.  And like with Who, I fear that Sherlock is becoming a little bit too obsessed with Sherlcock the enigma, rather than the world of Sherlock Homes as a whole.  Which leaves me with little else to suggest other than, is a comedy scene involving the misunderstanding of a deaf person’s sign language more the stuff of American ‘comedies’?  And postcards only please if anyone can come up with a narrative reason for reimagining Victorian Mycroft as Monty Python’s Creosote Man…