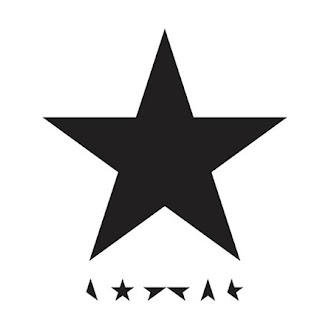 There have been hints for some time of Bowie’s Scott Walker influenced tendencies and as far back as `Bring Me The Disco King`, (a song that appeared as a `Reality` extra but dates back further) the idea of a jazzier backing track was simmering. Far from being a curio, `Sue (Or In A Season of Crime` )turns out to have been significant too. It was after working on this new track for the `Nothing Has Changed` compilation that Bowie opted to take the concept and most of the musicians as the backbone of what has now emerged as `Blackstar`. It’s on here too, though somewhat differently arranged. On the cd the first thing you notice is that nothing will be easily given away on this album; the lyrics are printed on a black surface and are only readable if you hold the sleeve up to the light in a particular way!


No time to write an in depth thing if I’m to get this posted but here’s some notes I made while listening for the first time to the full album….


Blackstar- already well known thanks to the video, the song itself sounds more angular at first when heard in isolation. The drums pound softly if that doesn’t sound like a contradiction and you notice the backing vocal far more. Love the way that the electronic beats occasionally surface and there are weird spacey noises underneath the sax solo. The way the song morphs into the “Something happened on the day he died” section is a beautiful moment- the orchestrations arranged by Bowie himself it seems- with that single trail leading out of the background wailing. There’s something great too about the way you think the song’s going all soft then it bites back. “I can’t answer why, just go with me,” Bowie declares cheekily as the backing vocals find lots of things that can end with the word star!  “You’re a flash in the pan, I’m the great I am,” he declaims. I wonder how many characters there are in this song? Who was “born the wrong way round”? The way the song sinks back into its original tune is seamlessly done unlike the jarring manner it had left. And what’s this solitary candle at the centre of it all for? The ending sees the song collapse into a single note with electric buzzes around it. 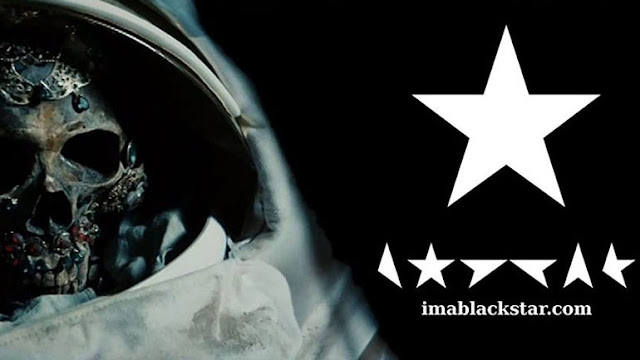 Tis A Pity She Was A Whore – Starts urgently and at first feels like it might be more conventional while Bowie’s vocal matches the running notes behind it. There’s not much of a tune but it has such forward motion. The lyrics? Oh they’re not printed properly at all but you get the idea from the title and lines like “she punched me like a dude”. Bizarrely it reminds me of – wait for it – something off `Never Let Me Down` except done well. Imagine if that album had been like this, how history would be altered. Well, musical history at least.


Lazarus – From the stage play he’s also been working on though it may well become better known as hospital bed video song. This is slower “Look up here, I’m in heaven” it begins arrestingly. Is he addressing fame on this song? Out of the initial opening is one of those reflective songs Bowie has taken to in latter years, his vocal becomes more desperate, pleading to “be free, just like that bluebird.” There’s a lot of sax on this album btw. The lengthy instrumental outro has a Pink Floydyness about it albeit of a more urgent nature than that group would produce.


Sue (Or In A Season Of Crime) – Hang on, this is different. You may know the song in its original form but it has been radically re-tooled with Bowie’s vocal pitched sideways over a harder jazz background. It’s like he’s singing against the music rather than over it as before. The song is transformed into the nasty thing it needs to be fitting the lyric better too as the character describes how he’s actually murdered Sue because she went off with “that clown”. Presumably not a clown per se. The mixture of self- pity and anger swirls up as the song progresses to a spiralling ending that is stunning. Who knew this song was actually so good?!


Girl Loves Me- This sees Bowie’s compressed vocal singing mashed up mixtures of Clockwork Orange type words that combine to seem child- like albeit with a devilish glare. The marching rhythm seems like it can barely constrain the musicians who pop out with snatches of percussion. It’s mechanical yet also alluring. I bet though if the girl heard it, she wouldn’t love this character, he sounds a nasty piece of work!


Dollar Days – The first gentle piano opening heralds a curious song that suggests someone stranded away from home “If I never see England’s evergreens, it’s nothing to me,” It’s the album’s most straightforward song even if the lyrics don’t make their intent clear. More sax takes the song away from the jazzy edge that the rest of the album’s had so far. Great echoey ending segues into…


I Can’t Give Everything Away- Again ghosts of `Never Let Me Down` (if it had been good) float over words that seem to suggest Bowie is explaining why he won’t explain. A harmonica refrain keeps popping back and as if to further underline the title, there don’t seem to be lyrics on the packaging for this one! Or it could be this is just another character “with skull designs on my shoes”. Ooh, there’s even a Reeves Gabrels-alike guitar solo here. Strange song, strange album! 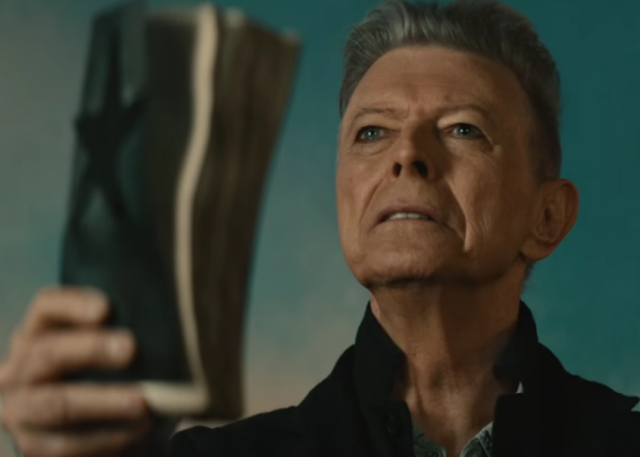 It’s obviously one of those records that will take more listens than there are hours in this day but on just one play for most tracks it is a challenging, interesting work that stretches and pulls different musical forms together and makes them fit together.

Of course it’s compulsory for every Bowie album since 1993 to be hailed as the `best since `Scary Monsters` but I’d say `Blackstar` is certainly one of the most unexpected detours in a career full of such left turns. For musical bravado it matches the `Low` / `Heroes` / `Lodger` trio, `Scary Monsters` or the `Outside` / `Earthling` duo and that’s a good place for Bowie to be.


Bowie was late to promo videos compared to some contemporaries yet being something of a zeitgeist surfer he made up for lost time with a series of promo films during the 1980s that were sometimes better than the music they were promoting. `Day In, Day Out` being an example of a startling video tagged onto a so so song. In the Nineties the videos delved into dark places- `The Heart’s Filthy Lesson` is one of the least likely videos to make for a single and `Little Wonder` is dazzling but too weird for the mainstream. Some equality between music and vision has happened of late but Bowie now seems to treat the promo films as something separate adding occasional lines of dialogue and narratives not necessarily related directly to the lyrics. The first three films for `The Next Day` album are each stunning in different ways.


`Blackstar` appears to be a single storyline centred around some kind of prophet whose execution creates the `blackstar` of the title. Quite what it represents is unclear- perhaps it’s the dark side of the character who survives the execution? Now comes `Lazarus` in which the same button eyed character from the previous video is in a hospital bed freaking out while the girl from the previous video seems to be manipulating him from under the bed. As the camera pans every inventive angle ti can, another Bowie emerges from a big old wardrobe wearing a stripy all in one outfit and looking equally worried. What does it mean? We may never know!


There is a tendency to read too much into these films of course. Sometimes an idea is used just because it looks good. After all the shaking motif of the background characters on `Blackstar` was only employed because Bowie liked the look of old cartoons. It’s worth remembering too that when we first heard and saw `Where Are We Now` Bowie seemed frail and old feeding the myths that had grown during his absence. Then the wily old fox turned out to be fine and the rest of the album was sung with energy and it turned out he deliberately wanted to appear frail in the first film. So sometimes he just does things because he wants to provoke speculation like this. Aaargh, we’ve fallen for it again!
Posted by John Connors at 23:28