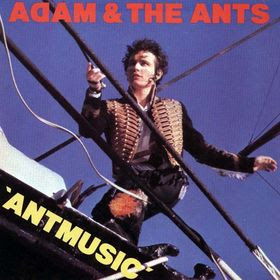 Adam & The Ants: Antmusic [4]. There's a jarring cut from Racey straight to a repeat of Antmusic from the 11/12/1980 edition. Richard Skinners head is superimposed over Adam & The Ants as he does his introduction, the effect is actually more distracting than if they'd just gone straight from one song to the other with no link.

The Look: I Am The Beat [30]. This time Top of the Pops pulls off the introduction-followed-by-camera-move-to-band that they failed to accomplish at the top of the show. In fact, why wasn't this the first song of 1981? I Am The Beat should have swapped places with Runaround Sue and got the new year off to a better start. It's a cracking performance of a really good song. The person who steals the show is the yellow shirted drummer who can't stop grinning like an idiot. And who can blame him? 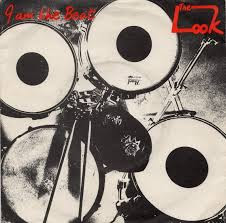 Barry Manilow: Lonely Together [21]. Poor Legs & Co. They have to follow The Look by dancing to a song which instantly sucks the excitement and energy out of the studio. We all know Flick Colby's thought process by now. Slow song=sensitive=ballet. So Legs & Co have to float around to the dreariest song since Matchbox's version of Over The Rainbow. Sample lyric "Your eyes are sad eyes/Mine are too." Also making sad eyes are Legs & Co, but once again their attempts at stirring some emotion are thwarted. Watching them drift around in their baby doll nighties with pained expressions just makes it look like they've all woken up in the middle of the night with stomach ache.
The Beat: Too Nice To Talk To [20].  A repeat from the 18/12/1980 show.
Sad Café: I'm In Love Again [59]. Richard Skinner's really getting the hang of the whole introduce-the-band-and-turn-to-one-side-as-the-camera-moves-past. It's just a shame he couldn't do it at the start of the show.Maybe they've put him on a lazy susan to make the whole turning and talking process less prone to error. Anyway, like Racey, it's been a while since Sad Café graced the Top of the Pops stage. In the meantime the lead singer seems to have decided that he's the new Mick Jagger. He isn't.
Matchbox: Over The Rainbow/You Belong To Me [18]. Ugh. Oh, and it's another repeat from the 11/12/1980 edition.
Chas & Dave: Rabbit [11]. Not a repeat from the 18/12/1980 show, which was my first thought because Top of the Pops has unwisely decided to reuse the hallucinogenic giant rabbit head props from Chas & Dave's earlier appearance. Was the "more rabbit than Sainsbury's" lyric a temporary substitute for a better alternative that was never found? Sainsbury's are not particularly noted for their rabbit stocks, but I can't think of a better line. More rabbit than...Elmer Fudd? Australia? Watership Down? Nothing else really works. 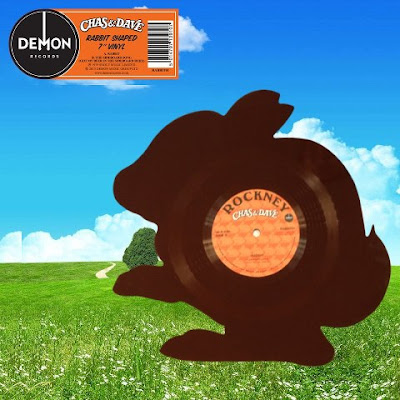 The Specials: Do Nothing [15]. A second repeat from the 18/12/1980 show.
The Nolans: Who's Gonna Rock You? [24] And a third.
Bad Manners: Lorraine [33]. Buster Bloodvessel is dressed as Henry VIII because... well why the hell not? Actually he looks pretty good, better than Lorraine anyway who is insensible.
Top Ten Countdown: Excitement. The first Top Ten of 1981. How have the BBC messed about with it this week? Actually, it's disappointingly uniform; a clip of the video for each song and the flashing Top Ten caption. Unexpectedly at number five John Lennon's song Starting Over gets a specific title caption which looks like a mistake until the number three song Happy Christmas War Is Over also gets the same treatment. Evidentially the BBC felt that different John Lennon tracks should be distinguished for viewers watching with the sound turned down.
Number One: John Lennon, Imagine. I had just turned nine when John Lennon was murdered, I think it's safe to say I didn't understand the public reaction. The Beatles were just some band who had broken up before I was even born (imagine that!). Watching the BBC4 repeats in the wake of David Bowie's death has given me a little more perspective than I had at the time.
Closing Titles: Queen, Flash [10]. Robin Nash is back as Executive Producer this week, Michael Hurll must have been on holiday. Credited as Production Manager is Geoff Posner who went on to direct and produce a lot of work for Victoria Wood, Steve Coogan and Harry Enfield.
Performance of the week: The Look: I Am The Beat