One of the fun things about non fantasy series that delve into the genre is seeing how well they manage to do and this episode achieves a good job of purportedly showing a UFO on several occasions. It sounds loud, it blows gusts of wind everywhere and is suffused with strong lights. More importantly it’s a big old physical prop. No wonder people think that it is a UFO and plaudits to the production team for making it as convincing as many an actual sci-fi series. They tip over into the horror genre with the victims though; as if making up for last episodes’ absence of murders this time we are served up three grisly deaths in which the bodies are encased in a black polymer in which they had drowned and which then hardens. Nasty even by Midsomer standards.

We’re in the village – and often the woods- of Cooper Hill  - located near an airbase from which we imagine the UFO actually comes. “Some sort of drone” one character suggests and they’re not far wrong though the production manages to keep the truth from us till very late in the day. They even go to the trouble of having the protagonist seen only as a gas masked reflection in the black liquid of death so he/she looks a bit like an alien.  Spooky music does the rest.
The sightings and killings coincide in what is the plot’s rather too convenient loophole with each murder taking place moments after the victim has seen the UFO only it turns out that the people operating it have nothing to do with the murders. The intrigue is heightened by the boss of the base, the stoic and steely Group Captain Ford (Pip Torrens) who has something to hide which turns out not to be a military but rather a personal situation. The narrative manages to include an old bunker running from the village to the woods as well as Alison Steadman playing a UFO spotting character who also has a history with the base. Some of the conveniences are as melodramatic as the visuals but this is not an episode to be taken too seriously. The other well known guest Michelle Collins doesn’t really get a lot to do but amusingly her character turns out to have worked on a top secret military project yet now runs the local B&B!
The best characters is caravan dwelling UFOlogist  Carter Faulkner who longs for contact with the aliens, sports a silver foiled hat and spends nights with his radar. Unfortunately he is also somewhat underused in a story that despite its visual strengths relies a little too much on an unlikely series of connections between characters’ pasts to work to a laboured conclusion. Very cool UFO though. 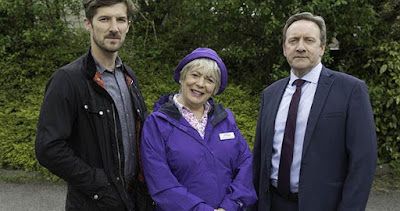