The Sandman Episodes 4 to 6

It is interesting to hear that some fans of The Sandman comic book are moaning about changes to the tv series, a perennial gripe of the dedicated. Some even ask why people who’ve never read the comic (like me!) are watching.  I can see their point but tv is a different medium and needs to assert its identity. Also don’t they imagine that at least some of those people might now seek out the comic? I like Neil Gaiman’s response to all this as well- “nobody gets to gatekeep The Sandman” he said. I’ve seen this with fans of all sorts of things, even football teams, where somehow they think they know more than the actual writer or the players or whoever! And if you think this is all to avoid spoilers before the break you’d be completely right.. 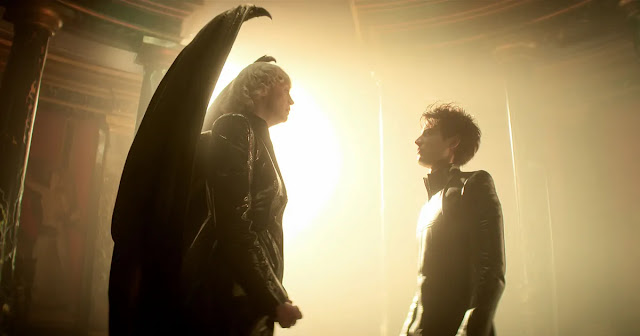 So to episode 4, `A Hope in Hell`. When you find out that Lucifer is going to battle Morpheus you imagine all sorts of explosive goings on, the sort of thing that might climax many a Marvel movie. Instead, The Sandman shows its class by making this far more imaginative yet equally identifiable. Rather like some bizarre top trumps game both parties imagine themselves in turn to be a creature or force and can inflict one blow. This must become increasingly ambitious and ends up with Dream almost finished when Lucifer declares she is the end of everything. What, she gloats, can possibly beat that? Whereupon Morpheus becomes Hope. It’s a great sequence because it never chooses the obvious and this episode as a whole is definitely a step up from the sometimes scrappy first three.

Guesting as Lucifer, Gwendoline Christie, familiar to Game of Thrones fans (and a decade ago putting in a great performance in Wizards vs Aliens) looks a bit like  early 80s Agnetha from Abba with her hairdo but there’s no mistaking the scheming intent in her eyes. In many ways its exactly the casting you wouldn’t expect which is why it works so well. Pleased to see too that this sequence finally brings Morpheus to life, ironically enough, as a character. Having moped his way through the first three episodes he is given far more to do this time and Tom Sturridge gets to actually smile. Morpheus is here to find his helmet, that odd mask that makes him look like a giant insect man. The visualisation of Hell is a triumph considering how most people have a mental image of lava, fire and general heat. “How come it’s so cold” questions Matthew the Raven. As if to nod to the traditional idea of Hell we see new arrivals having to carry baskets of fire in with them!

What sets this off even better is the small scale of the episode’s other storyline as John Dee wanders out of the institution to be run over by a car driven by an ordinary lady called Rosemary who ends up offering him a lift.  In a superbly creepy performance David Thewlis as John very, very slowly starts to alarm poor Rosemary as he tells his story. The tension is that you keep thinking she will give away her concerns and end up killed in some terrible fashion especially when she tries to get a petrol station attendant to call the police. Sarah Niles is so good as Rosemary keeps trying to cover how increasingly uncomfortable she feels. It feels almost like a two hander stage play and contrasts so well with the noisy sequences in Hell. Oh and you can breathe a huge sigh of relief sat the end as Rosemary makes it through though after what she’s witnessed will she be changed? Director Jamie Childs is on top form throughout- especially the moments where we see both John and Rosemary in the rear view mirror- and the result is the best episode so far. 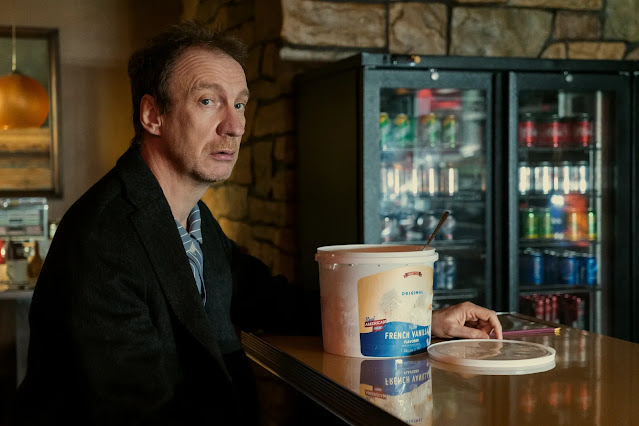 There’s an air of drama about the fifth episode `24/7` which is mostly set in a diner into which John Dee enters to seemingly observe over a cup of coffee. What he sees is people going through social niceties without saying or doing what they really feel. So using the stolen Ruby he slowly amps up their ability to speak the truth and act upon it. As already mentioned in episode four he sees this as his calling and believes he can “save the world.” It’s a slowburn scenario with a hint of Twin Peaks and takes a while for you to notice any changes so much so that casual viewers may be tempted to fast forward a little. I wouldn’t because it pays off well effectively reducing all human interaction to desire, sex and then brutal murder. All the while Dee sits impassively, David Thewlis a masterclass in restraint as he twists the metaphorical knife.

The characters share connections which allows Dee to do his work though you might say it is unlikely in a place like this that all the customers would have some link. They are a good mix though and the changes in their personalities are subtle enough to support the developments so people don’t just go crazy. They are simply saying and doing what is really in their head even though these truths are somewhat unsettling and even disturbing. Its quite engrossing though perhaps not an episode you will be able to re-watch much as once you know the conclusion it takes away the tension that builds throughout. You know something is going to happen, just not what it is.

And where is Morpheus while all this is happening you will be asking? Well, he turns up at the end to claim his ruby and expose the falsehood of Dee’s logic. What the latter calls `lies`, Morpheus says are dreams and it is these that power the world. So the power of dreams versus the power of truth- that’s a big issue. The subject could be taken further and perhaps it will be but it definitely sets you thinking. At the end there is a confrontation that takes us back to sizzling lights and falling stonework but it has been earned here I think. For the most part, this is a cerebral episode that, for all its bitterness, has a sweet assertion as it’s core.

The continued experimentation with mood continues with part six, `The Sound of Her Wings` which plays with a singular idea of how a mortal human would react to eternal life. This comes after an elegiac opening section in which we walk the sunny London streets with Morpheus and his sister Death. She has found him moping about having little purpose now he’s reclaimed his tools and gently reminds him that his purpose is his job. Her job as shown in a series of incidents is to gently guide the just deceased to where they are headed. I remember a series called Dead Like Me which had a similar idea though I think the comic got there first. Despite what we are seeing there is a beauty in Death’s considerate behaviour that makes each example we see moving in its own way. It could be the saddest ten minutes of television all year yet it has elegance and charm. Kirby Howell- Baptiste gives such a likeable performance that you feel her presence should be granted to everyone about to pass away. Watching her work reminds Dream that, as she tells him, “we are here for them.”

The rest of the episode is a delightful time tale concerning one Hob Gadling, a man whom the brother and sister see boasting in a pub that he will live forever. So they grant him this wish and Morpheus says they will meet one hundred years from now in the same location. This is in 1389 and we then glide through each meeting which pivots on the fortunes of Gadling which range from being knighted and owning estates to being a slave trader to losing everything and more in between. Nothing exceptionally dramatic happens (either in the episode or to Gadling) but the way these meetings gradually coax a glimmer of what could be friendship from Morpheus make them interesting enough anyhow.

Its’ also an interesting lesson as to how little pubs changed till the 1989 sequence and something of a journey through landmark moments. Most noticeably one year a youthful Shakespeare is nearby and there’s also an encounter with Johanna Constatine which adds an unnecessary threat to what has hitherto been a celebration of living an ordinary but changing long life.. Of course by the time we get to 1989 the pub is to soon be demolished to make way for flats. Dream’s demeanour shifts from distant observer to intrigued inquisitor and finally a (slightly) more conversational companion  he is insulted when Gadling suggests they have a friendship. His imprisonment seen in part one means he misses the 1989 rendezvous but this storyline has a more optimistic conclusion  than `24/7` as he eventually shows up over thirty years later at the nearby new pub.

America audiences may fail to see the subtext of the pub as the place where many friendships are forged  and endure while viewers eager either for gore or action may find this a dull episode. However, I think it is a worthy achievement to wring so much from what seems like so little. Gadling’s hectic resumes of his various lives is amusing and Ferdinand Kingsley gives enough light and shade to keep us interested. As for Tom Sturridge this is, for me, his best performance in the series yet as Morpheus now seems like an actual character rather than just an omnipotent God.