Will a TV adaptation of The Sandman be a dream or send us to sleep?

Neil Gaiman’s acclaimed comic book has long been coveted as a potentially great tv series. Well now it’s been made. I’m at a slight disadvantage having never read the comic book so know next to nothing about the story but I do know there are many who hold it dear so forgive any naivete when it comes to unravelling the plot. I should also point out I’m not a huge fan of Gods in drama as their unlimited powers are usually matched by their limited character development. When you can do what you like you don’t really have to be very interesting it seems. 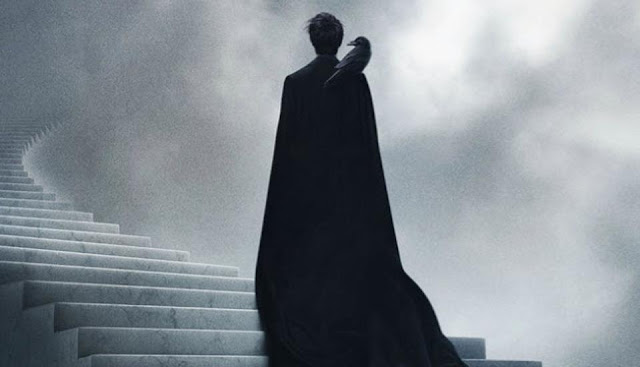 `Sleep of the Just, the opening episode has plenty of omnipotence and suggests  gothic noir with much of the narrative taking place inside a big old house with it’s shadows, ornate staircases and  vast basement. It is down in the latter that Charles Dance’s imperious Roderick Burgess (who likes to be known to guests as Magus)  decides to trap Death in order to force him to bring back the beloved son he lost in the war. He’s supplied with the necessary paraphernalia to make this happen by a worried looking Bill Paterson. Yes, it’s one of the productions where you keep recognising actors. The spell sort of works in that it brings Dream aka Morpheus rather than Death. Played by Tom Sturridge with the demeanour of a raven turned into a man he proves completely un-cooperative so ends up trapped in a glass bubble for over a century until an accidental happenstance releases him. This is basically the opening episode which luxuriates in slow camera pans around this cage as various visitors try different approaches to getting what they want. Meanwhile Dream’s disappearance causes an outbreak of a sleeping illness “in what people call the real world” as the early voiceover wittily puts it. When he finally does get back to his realm, Morpheus finds it has decayed.

It’s a bold premise that the script sums up clearly and the production manages to successfully visualise despite its scope. Director Mike Barker revels in the melodrama of it all, especially the cellar sequences and when Dream’s raven flies around the large house. Charles Dance is effectively vile as Burgess employing his trademark dismissive looks and an extra streak of cruelty. Tom Sturridge has to sit inside his glass bowl still, naked and silent for most of his scenes and at this point it’s unclear if he’s the hero of this or not.  Laurie Kynaston as Burgess Junior and Niamh Walsh as the old man's mistress Ethel Cripps who runs off with Morpheus's tools provide a more identifiable human side to proceedings. The tone is grim yet brimming with big ideas and as an opening episode’s job is to get you to watch the rest definitely does its job.

Its Ethel who is at the centre of episode 2 `Imperfect Hosts` as Morpheus seeks to find the talismans that provide much of his power. To do so he must take back something he’s created, in this case a gargoyle owned by dysfunctional brothers Caine and Abel. Oddly early reviews had this episode as not being as good as the first though I actually preferred it. The dialogue is much more causal and there’s a lot more of both Vivienne Acheampong’s librarian Lucienne and Boyd Holbrook’s Corinthian, both characters I’m warming to. Morpheus has a lot more to say this episode but I’m not sure about the decision to have him talk with a sort of accentuated deep voice. I don't think that’s Tom Sturridge’s usual voice as I’ve seen him in other things and while it’s not quite as silly as Batman’s growling it distracts a little.

Also livening up this episode are fun turns from Sanjeev Baskar and Asim Chaudrey as Cain and Abel. Some levity is essential in a show like this! Visually The Sandman remains dynamic- the scene with the three Fates as they constantly swap places is particularly effective. There is something of the pop video about some of it though, extensive digital graphics are essential of course in this sort of realm but I couldn’t help thinking that the moment when Morpheus rises into the air and starts to try and rebuild his cathedral we needed a blast of `Total Eclipse of the Heart`.!

There’s something satisfying watching the former Queen Victoria swearing like a trooper, taking no nonsense even from the Sandman and snogging her former girlfriend! Episode 3 `Dream a Little Dream of Me`s main guest star is Jenna Coleman, Doctor Who alumnus best known for being a more amusing Victoria than most we’ve seen. Here she’s Johanna Constantine. What little I know of all this lore is that this character is usually male and Scouse. Here she is female, obviously, and Cockney. It’s not dissimilar from the approach she brought to the role of Clara, an enigmatic addition to the many companions of Doctor Who albeit with added bad language and attitude. Clearly at home in fantasy environments she enlivens the episode considerably. Johana’s story is raucous and the actor is clearly having fun with it.  I notice that the further the series progresses the less pompous it becomes and Morpheus is more of an enabler than a character who does a lot. Mostly he stands about looking like he’s waiting for the video for `Vienna` to be filmed.

We also spend time with now older Ethel who has extended her life and is visiting her son John in a prison to try and find Morpheus’ ruby. David Thewlis plays John with a faraway look but I was never sure of his motives. Is he mad or does he have a plan? The show switches from colourful energy to bloody dismemberment easily and it is unusual for a show to do both.

The need for continued exposition is neatly sidestepped with handy back flips and it’s a series that tries to show as much as it tells, always a good sign. Yet I find the central conceit a little dull for such a programme. When someone says they are looking for a bag of sand, whatever that bag of sand can do, it doesn’t really sound very exciting. “What is the point of you?” Johanna yells at Morpheus and you can sympathise with her opinion. The lead character should not be the least interesting thing about a series but I think I find the talking raven more engaging than the sullen Sandman!