Film Review- The Phantom of the Open

In 1976 a Barrow in Furness crane operator called Maurice Flitcroft managed to enter the British Open golf tournament despite not being a professional golfer. In fact, he’d never even played a proper round of golf before. His eventual score became the worst ever recorded in the competition yet made him one of those underdogs that become popular because they try, a sort of Eddie the Eagle of the green. In this genial and often funny account his story is now immortalised by screenwriter Simon Farnaby and director Craig Roberts. The result is an enjoyable tale of  optimism, determination and being a bit sneaky! 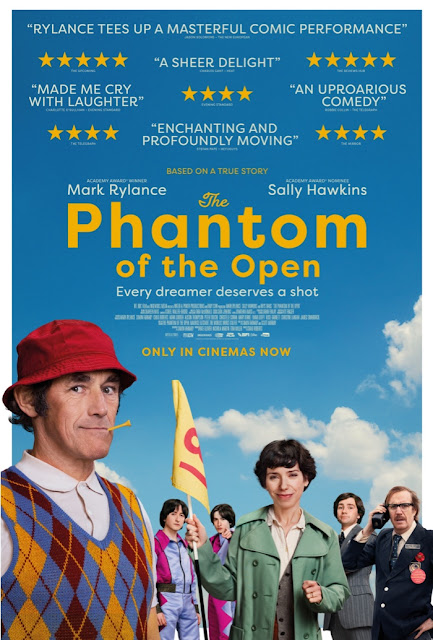 Mark Rylance brings his considerable acting powers to bear on a role that requires a stoic down to earth Northern demeanour. For Maurice dreams are simply things yet to be achieved –“practice is the road to perfection” he declares.  He hits upon the golf wheeze one night after learning of impending redundancies at work. In one of several surrealistic sequences which Craig Roberts adds to give the movie some cinematic breadth Maurice imagines himself climbing a green staircase and  sees the Moon as a golf ball. His attempts to play at a local club are derailed by the petty bureaucracy that runs the sport yet he practices in the most unlikely places. His entry to the prestigious event comes  by happenstance yet once there he starts to gain the crowd’s support despite his appalling scores.

Mark Rylance is excellent, remaining mostly poker faced yet showing how Maurice really believes in himself whatever is happening. His deadpan approach allows other characters’ reactions to become the comedic points and there’s plenty of that. Matters take on a more farcical approach when after being banned he re-enters a couple of years later disguised as a Frenchman which goes even worse. He ends up entering under a further three aliases over the years, one of which is Arnold Palmtree!. His disguises are ridiculous but meant to be and because Rylance takes it very seriously it’s amusing to watch especially a sequence where his caddy continually forgets he’s supposed to be French.

The film is well embedded in its’ Seventies timeframe with authentic looking tv coverage utilised to give a sense of the time while interiors are suitably shabby to contrast with the colourful moments of the dream scenes. The pace is brisk with the use of training montages delightfully low rent compared to those you see on American films.

Maurice’s family support him though his stepson Michael is pulled between family and job which provides the (slightly) more serious dramatic sub plot of the movie. Sally Hawkins is Maurice’s wife Jean whose character is given more to do than is often the case \with such characters and has her best scenes nearer the end. There also strong support from the amusing Christian and Jonas Lees as Maurice’s disco dancing twin sons and Jake Davies who finds a believable truth in Michael’s conflicting priorities.

There’s a cultural line drawn later in the film when Maurice finds himself and his family whisked over the United States where some golfing fans have formed a club in his honour. Whereas in the UK golfing establishments look down on the “world’s worst golfer” over there they celebrate it. It’s something of the opposite to the way things normally work but provides a good climax to the story as Maurice’s pie in the sky promises made to Jean on the day he proposed all those years ago are delivered in his homespun manner.

The film’s intention to remain true to the real life story means that it lacks a stronger antagonist relying on the snobbish golf hierarchy whose reactions are class based.  Rhys Ifans' Keith Mackenzie personifies this attitude but the character is whittled away slightly unsatisfactorily as matters progress. I felt at times more could have been made of Michael’s conflicting loyalties; while this does provide the film’s biggest dramatic scene it has been skated over perfunctorily till then.

Also the film never quite nails down why golf in particular becomes such an obsession for Maurice despite Roberts’ bravado fantasy moment. You wonder if something else had been on television  whether the real life Maurice would have pursued that? I looked up his story and he’s quoted as saying that he did it “to achieve fame and fortune” which makes him sound a bit more calculated than the portrait the film offers. However James Flitcroft has said that he finds the film a realistic portrayal of his father.

The Phantom of the Open uses many of the tricks of the sporting hero movie yet turns it round so that though Maurice never wins anything by the end it feels like a victory. Such shenanigans could never happen now in a world where there are probably dedicated golf channels that would expose fake entrants even before anyone got a look at their bad wig! This is definitely a film which swings more towards the optimistic than the pessimistic which seems to be a reflection of the man himself.