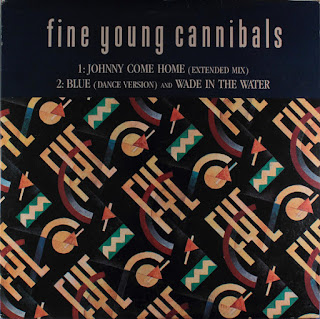 [15] Fine Young Cannibals: Johnny Come Home. I remember the Fine Young Cannibals first time round but I don't recall them making much of an impression on me. This was clearly a mistake judging by this barnstorming performance of a very good song. I think Janice Long sums it up best when she shapes her words carefully like clay in the hands of a master potter and reveals “I think Roland Gift's voice is just...like...brilliant.” Despite all this praise, there is no way to describe whatever the hell it is the bass-player thinks he's doing. And he looks stupid doing it. Fred Wright is still on Lighting duties this week but Michael Hurll has had a word. The purple studio lighting has been dialled back from last week's visual cortex burning levels to a less strident shade of magenta. Week two of the new main set, for those keeping track, and someone has found the button that makes the neon tubes flash on and off. There's also a new addition, a row of round white lights that flash on and off to no obvious pattern. If you translate the flashes into Morse code they spell out “help I'm being held prisoner in the BBC lighting department,” but that's probably a coincidence.


[28] Sting: If You Love Somebody Set The Free. On video. No, it's not. Top of the Pops breaks with the usual running order to have Sting perform the second song of the programme in the studio. Except, Sting is performing on the old main set. This is a pre-recorded performance pretending to be live. Let's play Sherlock Holmes and try and work out when it was taped. The complicated bank of flashing lights behind Sting was used on the 06/06/1985 and 23/05/1095 editions but the pattern of the studio lights most closely matches the one used on 06/06/1985; you get a good look at it when Gary Moore & Phil Lynott perform Out In The Fields. Where did Sting get his silly asymmetrical glasses? There is no answer to that question. Sting loves the other two members of The Police and has set them free to release their own solo albums. Andy Summers abuses his freedom by recording a track called 2010. It's the theme to the 2001 sequel 2010 . It's a disco version of Also Sprach Zarathustra . It's on the soundtrack album but not used in the film, for some reason. It must have been so good they had to leave it off to give the film a chance. 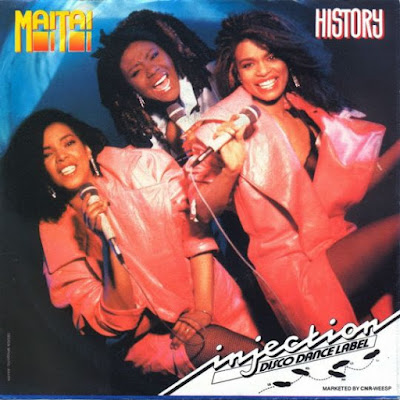 [9] Mai Tai: History . A band, a drink, and a lethal martial art. Mai Tai perform on a stage with a complicated knobbly-textured background that turns out to be hundreds of white light bulbs. These unexpectedly go off with an apocalyptic white flash that burns out the picture for a second and looks like the wrath of God. Subsequent flashes are considerably more restrained.
Top 40 Breakers : [30] Paul Young, Tomb Of Memories; [24] Tears For Fears, Head Over Heels; [12] Marti Webb, Ben.
[26] China Crisis: King In A Catholic Style (Wake Up). Janice Long has gone full Valley Girl. “Over there are some guys who write like amazing songs.” The song may or may not be like amazing but the title could use some work as could Gary Daly's mullet. Here's fun! Gary Davis pretends to be asleep at the end of the song, and has to “wake up.” Do you see?
Top 10: [10] Harold Faltermeyer: Axel F. Harold Faltermeyer has brought along... one, two, three, four, five, six keyboards. What he hasn't brought is any real visual interest, beyond a couple of unfortunately placed smoke machines which make it look like his extension leads are smouldering. Is this really going to be three minutes of a man in a bad jacket pretending to play two of six keyboards? Nearly. Harold Faltermeyer pretends to play three of his keyboards while Vision Mixer Carol Abbott cuts to the video when she catches herself slumping into unconsciousness. Unfortunately the bits of the video mainly feature Harold F. pretending to type on a keyboard. We miss most of the unintentionally funny shots of Harold Faltermeyer unconvincingly CSO'd onto clips from Beverley Hills Cop. 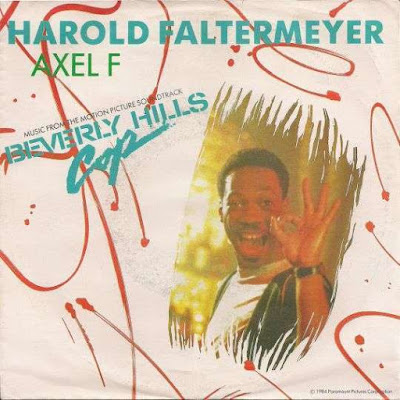 [9] Mai Tai, History; [8] Animotion, Obsession.
[7] Kool & The Gang, Cherish. Oh lord it's the dull Montreux Rock Festival clip again. Michael Hurll must own the copyright.
[6] Scritti Politti, The Word Girl; [5] Billy Ocean, Suddenly; [4] Marillion, Kayleigh; [3] Madonna, Crazy For You; [2] Sister Sledge, Frankie.
[1] The Crowd: You'll Never Walk Alone . The BBC4-safe 35 second clip.
[22] Prince: Paisley Park . Lots of jolly shots of the audience dancing uncertainly and trying to clap along to Paisley Park. And there's a change to the credits! The tradition is to run the credits directly over the closing footage. This week Carol Abbott has found a new button and shrinks the picture into a box, while the credits play over a black background. Performance of the week: Fine Young Cannibals, Johnny Come Home.


27 June 1985 (This episode wasn't shown on BBC4. It comes from the link in the comments under the write up for Top of the Pops 14/03/1985) Mike Smith: “Good evening. Welcome to Top of the Pops. A bit later tonight than usual because of the athletics but we are remaining athletic...” Peter Powell: “And we've got so much on as well! We've got Sister Sledge! We've got Kool & the Gang! And for starters a guy who was in America Australia yesterday! Top of the Pops today! Europe tomorrow! Paul Young!”
[17] Paul Young: Tomb Of Memories. The great pop mates are reunited. Smith and Powell together on screen again. What mere text can't contain is the all the clowning around and crosstalk in the introduction. A second tier of matey banter occurs after Mike Smith utters the word “athletic.” He points and pokes at Peter Powell's arm and says “look at this body here,” under Peter Powell's, “and we've got so much on as well!” Peter Powell then pretends to fall over and as he staggers he says the word “crumple” as if he is a Beano character narrating his own actions. 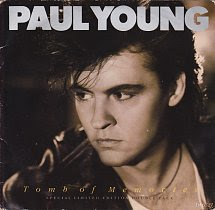 If this was Steve Wright and, let's say, Mike Read it would be unbearable because of Mike Read's smooth (boring) tennis dad persona and Steve Wright's unjustified belief that he is all three Marx Brothers incarnated in one body. The pairing of Mike Smith and Peter Powell works. Smittty can match Peter Powell's energy levels and brings out the best in him. It's all rather charming.


Top of the Pops slips into the later Thursday night slot normally occupied by The Little and Large Show , but don't worry they'll be back next week for anyone wondering what it sounds like when Paul Hardcastle starts his car. Because I'm a Doctor Who fan, I absent mindedly typed Tomb Of The Cybermen instead of the correct song title.


[5] Kool & The Gang: Cherish . Peter Powell's mention of Kool & The Gang makes my heart sink. Surely Michael Hurll is not going to trot out that wretched footage from The Montreux Rock Festival agai- oh, yes he is. It is, at least, another chance to admire the glittery stage costumes worn by The Gang. Particularly the one wearing a gold costume with clashing red glittery diamond pattern on his chest, and red glittery knee patches.
[23] The Commentators – “N-N-Nineteen (Not Out). It's the 1985 novelty pop song, released as tradition demands in time for the Queen's official birthday. Rory Bremner, who should probably know better, gets to impersonate lots of cricket commentators. Can you name them? I sure it was zingingly satirical at the time, but good luck watching the performance in one sitting. It took me three goes.
[11] Bruce Springsteen: I'm On Fire. On video.
[9] Marti Web: Ben. The music track that runs behind the hosts is very poorly chosen tonight. It's a weird mix of wailing metal guitar with disco pew-pew noises over the top. God knows what song it's from. It sounds intrusive and clumsy behind the introductions to Kool & The Gang, and The Commentators. It's infinitely worse drowning out Peter Powell's introduction for a charity single raising with what sounds like a laser dual in the Hard Rock Cafe. t's also unfortunate that Marti Web's charity single comes in a year that's already seen Band Aid, USA for Africa, and The Crowd. A queuing system is needed for all the worthy records. I understand why Ben was chosen as the song to raise money for the Ben Hardwick fund. However it does my brain in, that the film for which this Michael Jackson song was originally written has a frightening poster of a pack of savage looking rats running towards the viewer, with the tagline “Where Willard ended... Ben begins. And this time, he's not alone!”
Top 40 Breakers: [32] Elton John & Millie Jackson, Act Of War; [29] The Damned, The Shadow Of Love; [22] Howard Jones, Life In One Day.
Top 10: [10] Scritti Politti, The Word Girl; [9] Marti Webb, Ben; [8] Mai Tai, History; [7] Marillion, Kayleigh; [6] Billy Ocean, Suddenly; [5] Kool & The Gang, Cherish; [4] Harold Faltermeyer, Axel F; [3] The Crowd, You'll Never Walk Alone; [2] Madonna, Crazy For You.
[1] Sister Sledge, Frankie . Only three of the Sledge sisters are available for recording, because Kim is “about to give birth.”
[30] The Conway Brothers, Turn It Up. The laser dual in the Hard Rock Cafe comes from this ironically named track. On BBC4 Top of the Pops runs longer than the original broadcast because the production team built a little slack into the programme. The audience were recorded dancing to the whole of the final song. This allowed the good people in BBC1 continuity to keep the schedule on track by fading the programme at an appropriate point.
Understandably no one at BBC4 cares about playing Top of the Pops exactly as broadcast. They play recording to the end (I hope they remember to rewind the tape afterwards). This means BBC4 often broadcast a couple of minutes of never before seen footage (of people dancing badly and failing to clap along to simple rhythms). I really hope that somewhere out there in the real world someone has seen themselves in the closing credits to Top of the Pops for the first time ever. Because this edition is an off-air copy, it gives the chance to see how the programme would have looked on BBC1. It was obviously a night when the schedule was tight. Michael Hurll's credit comes up and it's a quick fade to black, and then to a caption slide promoting Sing Country over on BBC2, and then presumably straight into the The Nine O'Clock News.