Magnum- “True to pleasure”
Last year on this blog we looked at the new Ruby chocolate and now it has made its biggest foray into the confectionary world with the new Magnum Ruby ice cream. The advert certainly portrays it as a luxury item so much so that it has its own shop which serves one customer at a time. This is not social distancing however, this ad was made before the lockdown, and is simply to illustrate just how exclusive a taste this ice cream is. The ad shows a young woman – played by South African model and actress Chloé Hirschman - drawn into an ornately appointed shop that looks like a cross between a casino and a bank. Greeted by a smartly dressed doorman she is shown the creation process which seems to involve a lot of models looking at the ice cream inside glass containers or handling chunks of ruby chocolate with tweezers as if they are valuable fossils. This is probably not how it’s actually made. 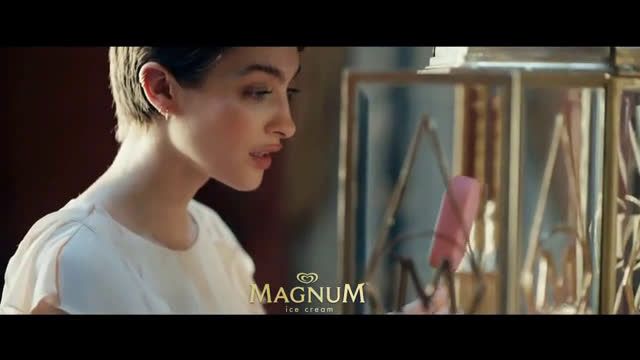 Eventually she gets to taste it with a suitable crunch and the effect it has on her is so strong she ends up dancing around with the staff before accompanying the doorman sliding down banisters of a staircase that wasn’t there when she came in. The advert emphasises how much care is taken over creating the product though whether those who make it really end the day with a shindig we don’t know.
The company describes the product as “An indulgent velvety white chocolate ice cream, enriched with a luscious raspberry sauce swirl and coated in Magnum’s signature cracking Ruby couverture chocolate, Magnum Ruby is the ultimate luxury ice cream. Ruby chocolate is not bitter, milky or sweet, introducing the nation to a taste experience like never before." Not quite my feelings after trying some ruby chocolate last year.
The haunting music which sounds like it might be a modern update of an old song is “Daydream in Blue” by the Sheffield based electronic music group I Monster which consists of Dean Honer and Jarrod Gosling. The promotional campaign also included a Ruby Room opened in London’s South Bank Centre in January. This multi sensual experience used mirrored walls, an infinity mirror, lights and sounds to create moods. Guest were able to sample the actual ice cream as well.

SEAT Leon- “Go Head”
One of the most striking musical adverts of the moment is for the new SEAT Leon car. It relies on just having a cool advert rather than going on about the attributes of the vehicle itself. In fact it opens as if it’s a clothes advert with a man walking towards the camera and each time he clicks his fingers in sync with the beat of the soundtrack his outfit changes. Then we see the car itself albeit suspended upside down like an art exhibit. Is that how you’re meant to park it in the garage?!
That hypnotic music is a track called `Go Head` by an Irish singer called Rocstrong (real name Andre JP Bangala). The song fades as it heads toward the second verse due to a swear word lurking there and is edited to remove repeated references to guns. The song is quite well known to fans of the Cohen Brothers film Hail Caesar. The advert is arresting even if the link between the music and visuals is not always clear.


The UK- “Let’s Get Going”
Well this intrigued me when it first came on recently. It’s not exactly an advert neither is it introduced as a government information film like the pandemic ones. Instead it seems to be a `won’t everything be brilliant now we’ve left the EU` film financed by the government. With stirring though generic background music we’re taken through a montage of different workers all hard at it whether in factories, offices or service industries and all with smiles on their faces. I know I personally grin regularly while working ! On each item they are producing or knitting or driving or looking at on a screen there are arrows. At the end the film declares it is `The UK’S New Start` and –yes- there are three things yet again. Check. Change. Go. Presumably while Staying Alert too?  Yet what does that mean? Check what exactly? Change into your summer shorts? Go where? So what this little film really is about is urging people to check if there are any rule changes when we leave. Wouldn’t it be more useful to perhaps mention some of these changes instead of adding to this government’s growing lexicon of primary school level three point phrases. One minute we should Stay Home, now we should Go. I wish they’d make up their minds.