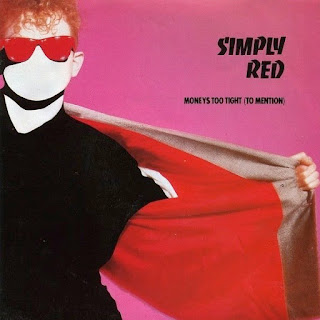 Reviewed by Chris Arnsby. Peter Powell: “Hello, welcome to Top of the Pops! Good evening to you!” Mike Smith: “Let's not hang about. Forty minutes of the latest chart tunes. We start off at number thirteen with Simply Red and Money's Too Tight, and Mick is going to sing live. Aren't you Mick? [13] Simply Red: Money's Too Tight (To Mention). This episode of Top of the Pops comes from Smaug's horde at https://mega.nz/folder/h0snQACa#uiNNqosfbdrfzODHsE1clw Excitingly, it's an off-air recording which means the recording starts with a nostalgic blast. A glimpse of the (then brand-new) BBC1 computer generated globe. Even more exciting, this is a 40 minute edition of Top of the Pops . We haven't had one of those for a while. (Not since 03/01/1985 according to BBC Genome). Let's hope they use those extra 10 minutes wisely. What celestial conjunction has caused this change to the schedule? The Little and Large Show has come to an end. Don't worry, it's not permanent. They'll be back next year. And the year after that. And after that. And again for a couple more years. Meanwhile, once Eastenders finishes at 7.30pm, Top of the Pops and Tomorrow's World luxuriate and spread themselves out across the evening.First up is a 40 minute Tomorrow's World. It's the 1985 Prince of Wales Award for Industrial Innovation and Production, from Highgrove House in Gloucestershire. Then comes Top of the Pops, and then... Points Of View ? What? But that's a Wednesday night programme. What celestial conjunction, etc, has untimely ripped Points Of View from its usual slot. A Party Political Broadcast by the Labour Party. Oh no.
Speaking of Labour, here's Simply Red. Another band I can't watch properly because of passage of time. However, attempting to put aside years of accumulated prejudice, how do they do on 18 July 1985? Well, I don't much like Mick Hucknall's grey slacks.

[23] Steve Arrington: Dancin' In The Key Of Life: On video.
[15] The Cool Notes: In Your Car . A well synchronised performance from The Cool Notes. The dance moves and costume colours (assorted shades of pink) are all carefully matched. Well, not completely. Hidden right at the back of the stage is a drummer wearing a grey suit! Shocking. No wonder The Cool Notes form a two row defensive wall to block the non-pink clothing from view as much as possible. 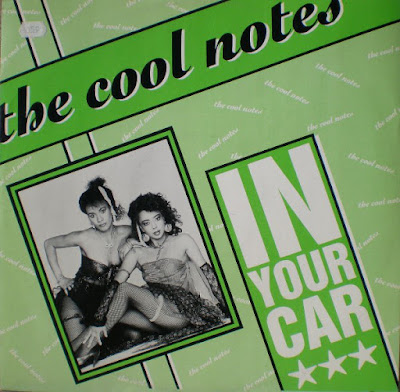 [25] Russ Abbot: All Night Holiday . This is not the first time Russ Abbott was allowed into the Top of the Pops studio. Long ago when the world was young, he co-hosted the 25/09/1980 edition of Top of the Pops with Mike Read. Ostensibly Russ was there because he had a single out (The Space Invaders Meet The Purple People Eater) but I can't help wondering if Michael Hurll was also hoping to lure Russ Abbot from ITV to the BBC. Little and Large made the channel leap in 1978 after a single series of The Little and Large Tellyshow for Thames. Russ Abbot was at the same point in his career in 1980 after one year of Madhouse for LWT. In case you think I'm needlessly looking for conspiracies, who do you think produced the Little And Large Show for BBC1? Oh look, it's Mr Light-Entertainment-Godhead himself, Michael Hurll.
Regardless of backstage politicking, Russ Abbott stayed with ITV for the next five years, and the terrible idea co-hosting Top of the Pops with celebrities was killed off. Who could have seen that coming considering the talent on display; Elton John, Roger “backs against the wall” Daltrey, Cliff Richard, B.A. Robertson, Kevin Keegan, erm Richard Skinner (it was his first show, paired unfortunately with J**** S*****), Olivia Newton-John, and Russ Abbot. Leo Sayer appeared alongside Russ Abbot, apparently as co-co-host in a double-booking error.
Russ Abbot has been put on a podium surrounded by the audience. This worked really well for Phil Lynott and more recently Denise LaSalle, but All Night Holiday is simply too bland to generate any real excitement. It looks as if the audience has chased Abbot onto the podium and trapped him there. Let's hope they don't discover fire. There's an odd moment at the end of the song when we cut to Peter Powell. He stands arms crossed, with an odd thin smile on his face and holds this pose for about a second before launching into his introduction to The Cult. A case of being cued late, or is he trying to send an unspoken disapproving message about All Night Holiday? His words, when they come, have hidden, barbed depths. “That's Russ Abbott! Perfect for beach parties I would think! Now some serious music...”
[19] The Cult: She Sells Sanctuary . The studio microphones are left turned up while The Cult perform. The band go down very well with the audience to judge by the assorted whoops and shrieks of approval. 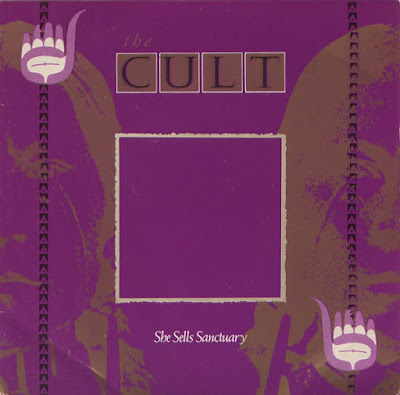 [12] Jaki Graham: Round & Around . Harold Faltermeyer brought along six keyboards. Not to be outdone, Jaki Graham's keyboard player has also brought along six but he's arranged them more ergonomically in two rows of three. Jaki Graham also copies Harold Faltermeyer's example by not playing most of the keyboards. Why are they there if you don't need them?
Top 40 Breakers : [37] Tina Turner, We Don’t Need Another Hero (Thunderdome); [34] Billy Idol, White Wedding; [31] Feargal Sharkey, Loving You; [18] Trans X, Living On Video.
Top 10: [10] Marti Webb, Ben; [9] Fine Young Cannibals, Johnny Come Home; [8] Opus, Live Is Life; [7] Bruce Springsteen, I'm On Fire
[6] Denise LaSalle, My Toot Toot . Denise LaSalle is represented by a clip of her 11/07/1985 Top of the Pops performance . Like Phyllis Nelson, her record company is apparently too cheap to make a video for a Top 10 selling record.
[5] Madonna: Crazy For You; [4] Kool & The Gang, Cherish; [3] Eurythmics, There Must Be An Angel (Playing With My Heart); [2] Harold Faltermeyer, Axel F.
[1] Sister Sledge, Frankie . On video.
[40] Five Star, Let Me Be The One . Audience dancing and credits,
Performance of the week: The Cult: She Sells Sanctuary