Review round up- Q magazine, TikTok, The Durrells Series 1

Q Magazine publishes its final issue this month ending 34 years of music coverage, a victim of the pandemic lockdown which made it impossible to sell the last few issues though it had falling readership even before this happened. In some ways, Q was like the Top of the Pops of magazines showcasing whatever was popular.  While it never had the bite of the old style weekly music press it made itself an indispensable successor as those papers fell away one by one.  It was less inclined to push new artists onto success as the weekly papers had done, rather it watched established acts develop. With excellent access even to the most elusive stars they were able to remain across the pop axis with aplomb adopting a breezy but often forensic approach that both informed and entertained. They even got an interview with Prince once, albeit one in which the interviewer was not allowed to take notes. 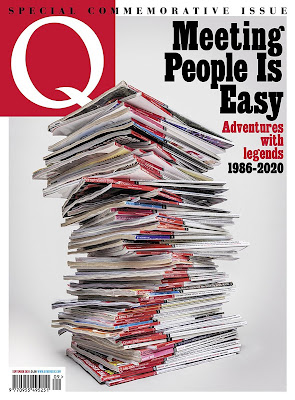 Q journalists also painted the more human side of stars while retaining an objective opinion of their music. This was not the place for scathing reviews, often it felt as if the reviewer was disappointed at a weak album. Q never stuck too rigidly to one genre allowing it to slide easily across all areas while keeping the writing lively and not too technical. Visually it made the very best of the format with excellent photography and layout supporting the variety on offer each issue. Until an artistic revival over the past 3 years, Q did lose its way for a while falling for the easy option of lists and summary features rather than the in depth profiles it did so well. Its demise leaves just two mainstream music magazines- Select and Mojo – both of which tend to be drier and more serious chroniclers of music history rather than having an interest in its future.  Q had a wider remit and a more satisfying balance of past, present and future. Its demise also highlights the rise I suppose of blogs like this and all other self produced material. We're all experts now and the role of entertainment journalists may be on the way out when anyone can find a platform for their views. If any of us could write as well or eloquently as Q's best work it would be something but this seems like another little shove towards the ordinary.  Like all good things, we’ll miss it now it is gone.

One week on last year’s series of Strictly Come Dancing, when they announced the social media feeds you could use, a new one was included- TikTok. Even the normally savvy Claudia Winkelman said the name as if she had no idea what it was. The very next week the Strictly TikTok mention was absent and was never referred to again. Was this because the BBC were tipped off that they had unknowingly picked up a political hot potato? TikTok is the latest social media thing to get people worked up - this year’s Snapchat if you will. It’s rather similar to the defunct Vine in that it showcases short video clips shot on smartphones mainly it seems of people re-creating dances. Successive cultural developments are always blamed for adversely affecting young people; whether it was rock and roll or videos or electronic games or social media, the instinctive reaction seems to be to criticise them. Then about five years later they become mainstream and everyone likes them! With TikTok though matters have gone further. Of course older people don’t see the point of something that offers functionality similar to SnapChat or even YouTube but the real arguments seems to hinge on the fact that this is something that originated in China. It’s not especially new, and was created as far back as 2012 though it wasn’t launched outside the country till 2017. Growth since has been rapid to the point where there are now TikTok `stars` who earn a living from their videos in the same way that YouTubers do.


Like Huawei, TikTok is now seen a tool of the Chinese authorities whose alleged subversive aims have made it the number one enemy as far as Donald Trump’s somewhat scattershot approach to foreign policy is concerned. Perhaps the US thinks China’s aim is to cause us all to spend so much time dancing and singing we’ll not notice them take over. There is a lot of hypocrisy over the claims that Chinese tech is somehow there to infiltrate and undermine our society as if the UK and US governments would never consider such espionage themselves! Every major power is up to their eyeballs in spyware, covert surveillance and technological interference, let’s not believe China is any different than we or the US are. It seems unfair to labour something as fun as TikTok with such a burden. After all it wasn’t that long ago that Twitter was viewed with some suspicion- and now it is the communication tool of choice for one Donald Trump… 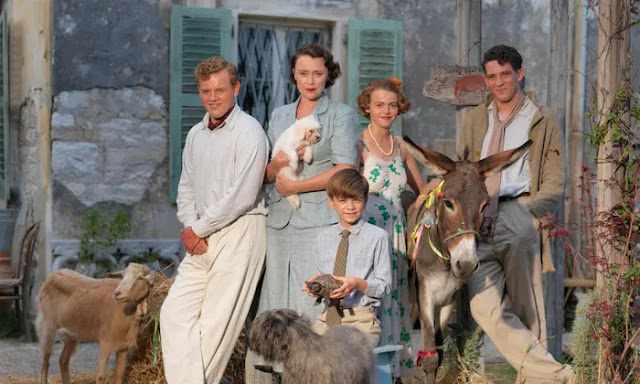 I must confess to being underwhelmed by Gerald Durrell’s famous book `My Family and other Animals` when we did it at school but pleasingly The Durrells is an altogether livelier tale. Now finished after four seasons it had passed me by till it turned up as one of the many old series being repeated during the pandemic.  Based on a trilogy Durrell penned, the series’ key decision was making Gerald’s mother Louise the central character.  Adapted by SImon Nye, whose work is always enjoyable, (Is It Legal? Is one of my favourite sitcoms) the series plays as a spirited characterful drama. I’d hesitate to call is a typical Sunday night drama though, it has more energy than that. The brilliant cast is led by Keeley Hawes. Louise is a whirlwind being both free spirited yet also a worrier. Doing her best while trying to have a life for herself Keeley Hawes is a triumph in the role and this makes the whole story roll along easily.


Josh O’Connor is frequently funny as Larry whose writing has made him somewhat prone to elitism but crucially he’s there for the family when needed and over the course of the series grows into a surrogate father figure. Daisy Waterstone is excellent as precocious daughter Margo whose rebellious spirit brings her into the employ of an agoraphobic countess (played by movie legend Leslie Caron!).  Callum Woodhouse gets the broadest comedy as hapless Callum the gun toting brother who is “really unlucky” and during the course of just six episodes manages to end up in jail twice, get bitten and endures humiliation from the girl he meets in the village. It’s a gem of a part and the actor has a lot of fun with it. Gerald Durrell, ably played by Milo Parker is the quietest character spending his time collecting animals and pleasingly the script does address the rights and wrongs of such a pastime.  Though it is often played for laughs, the series does have something to say about family life and the struggle to establish yourself in a different culture.


Along the way we meet numerous Greek eccentrics, and this brings us into the culture though whether the people who really live there would mind being depicted as so shouty I’m not sure. The landscape is of course another star of the show being as warm and colourful as you’d expect. Moreover in these hard times it is escapist entertainment that I would unashamedly recommend if you want to a break from the depressing `New Normal`.