Reviewed by Chris Arnsby. 23 May 1985: Mike Read: “More exciting than Dynasty, more fabulous than Dallas, even better than Eastenders.” Steve Wright: “It's true!!” Mike Read: “Top of the Pops.” Steve Wright: “Top of the Pops!! And here we're going to start with Go West and Call Me!!”
[17] Go West: Call Me. Go West's Wikipedia page claims the band only has two members, lead singer Peter Cox and Richard Drummie, guitar and backing vocals. This must be a bone of contention for all the other people on stage performing Call Me. I only discovered the non-person status of the drummer, guitar player, second keyboard/guitar player, and backing singer because of an unfortunate moment just after the first chorus when the backing singer forgets how to dance. She's doing fine and then the rhythm just abandons her and she is left staring at her malfunctioning feet for a moment before getting back into the groove. Maybe it's best that she is not named by Wikipedia but using an impersonal pronoun feels rude and reminds me of my nan asking “who's she, the cat's mother?”

[20] Katrina & The Waves: Walking On Sunshine . On video.
[7] Marillion: Kayleigh. Lead singer Fish looms over the stage, audience, and the non-Fish bits of Marillion. Low camera angles make him look out of scale with everyone else to the extent that you half expect the rest of the band to don pixie hats and dance round an inaccurately sized model of Stonehenge.
[24] The Power Station: Get It On . On video. Who ordered the hideous cover of a T.Rex song? (John- Ahem as they say in tv debates with all due respect you are totally wrong! The Power Station, consisting of two members of Duran Duran, Robert Palmer and Tony Thompson were awesome for the brief time they existed.) 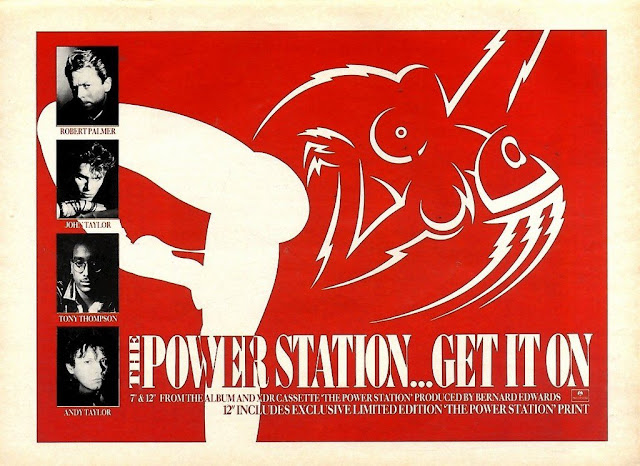 [18] Gary Moore & Phil Lynott: Out In The Fields. Out of the episode I recorded because it was edited by BBC4 to fit a 30 minute slot. After all, when you've got a terrible and non-unique music video like (hypothetically) The Power Station it makes much more sense to keep that and lose a one-off studio appearance. Fortunately the performance is available on YouTube. Top of the Pops has rolled out all the rawk standards. The dry ice machine is set to icecano and occasional puffs of sparks breaks through the fug when Mike Kelt (Visual Effects Design) detonates a BBC issue thunderflash at minimum safe distance. The end result resembles a church hall version of Krakatoa West Of Java.
Top 40 Breakers: [35] Stephen Tin Tin Duffy, Icing On The Cake; [29] Scritti Politti, The Word Girl; [28] Animotion, Obsession.
[21] Depeche Mode: Shake The Disease . “Wearing some real good gear,” according to Steve Wright. Frankly I wouldn't trust him to tell me it's raining. So, are the boys wearing real good gear? It's alright. 75% of Depeche Mode have gone for the generic Top of the Pops serious musician look and dressed in black. There's so much black clothing and bleached blonde hair on display you could mistake this for a Dollar lookalike contest. Dave Gahan has gone for the just-escaped-from-the-Blofeld-plastic-surgery-factory-in- Diamonds-Are-Forever look, in a grey Nehru jacket and matching tambourine.
Steve Wright himself is done up in full black tie attire because he's just so nutty. You literally don't know what he's going to do next. Meanwhile in the background one of the studio cheerleaders is being used as a prop to hide a camera operator. You can spot her being led up and down the stage-right stairs as a human shield, lest the audience at home catch sight of the camera operator and turn him to stone with their gaze.
Top 10: [10] Manchester United Football Team, We All Follow Man. United; [9] The Style Council, Walls Come Tumbling Down; [8] Steve Arrington, Feel So Real; [7] Marillion, Kayleigh; [6] DeBarge, Rhythm Of The Night.
[5] Bronski Beat & Marc Almond: I Feel Love. “Such nice boys,” is how Steve Wright describes Jimmy Somerville and Marc Almond. A zany addition to the casual prejudice of the mid-eighties.
[4] Phyllis Nelson, Move Closer; [3] Jimmy Nail, Love Don’t Live Here Anymore; [2] Duran Duran, A View To A Kill.
[1] Paul Hardcastle, 19: Comedy stammering ahoy from Mike Read and Steve Wright to introduce 19. It was everywhere. You couldn't talk about the song without someone going “n-n-n-n-ninteen.” It was still lodged well enough in the collective memory to act as a load bearing joke in the lyrics of Stutter Rap by Morris Minor and the Majors, three years later.
[36] Skipworth & Turner, Thinking About Your Love. Audience dancing and credits and pastel clothing. (John- So every episode of TOTP from 1985 then!)
PERFORMANCE OF THE WEEK: Gary Moore & Phil Lynott, Out In The Fields. 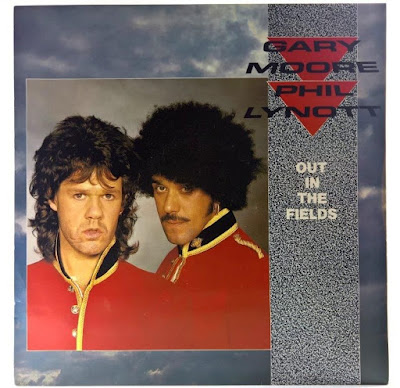 6 June 1985:
Richard Skinner: “All hits, all the time. This is Top of the Pops.” Simon Bates: “There's a glimpse of Bowie later on plus a new video on Top of the Pops, new headgear as well, plus...” Richard Skinner: “Ah yes, let's start off with Phil Lynott, Gary Moore, Out In The Fields.”
[5] Gary Moore & Phil Lynott: Out In The Fields. Simon Bates is wearing Deeley Boppers because that's the kind of guy he is, several years out of date. Richard Skinner seems to find them oddly alluring. Out In The Fields begins with a fantastic long tracking shot away from the hosts and across the crowd. It ends on Gary Moore and Phil Lynott playing on a podium, surrounded by the audience and almost lost in a sea of waving arms. The resulting shots are full of energy and excitement. I can't think of a better way to start the programme.
[4] The Crowd: You'll Never Walk Alone . Light entertainment and the real world collide as Simon Bates introduces the charity single raising money for the Bradford Disaster Appeal fund, following the fire which killed 56 people on 11 May 1985. This comes the week after a live Top of the Pops (30/05/1985) was hosted solo by Janice Long. The day before, her co-host John Peel was at Heysel Stadium in Brussels for the European Cup final between Liverpool FC and Juventus. Peel was a witness to the events which led to the deaths of 39 people and the aftermath. Understandably he withdrew from presenting Top of the Pops. He returned to his Radio 1 programme the following Monday, with these opening remarks. “Well, hello again, chums. It’s nice to be back. And ever since last Wednesday I’ve been wondering what I’ve been going to say to you tonight, and I’ve decided the best thing is to say nothing. I mean, everybody else has. ... I’ll just say that as a boy I never understood why my dad wouldn’t tell us about his experiences in North Africa and Italy during the war, and now I do..." Just over 30 seconds of You'll Never Walk Alone are shown. My copy of tonight's BBC4 edition runs to 27 minutes 33 seconds, that's around 60 to 90 seconds shorter than usual. It looks as if The Crowd has been cut short because the Band Aid style video includes D** L** Tr*v*s and, more significantly, R-lf H-rr-s.
[16] Mai Tai: History . The camera operators are really on form tonight. There's a good selection of low-angle shots taken from hand-held cameras, some lovely sweeping crane shots, and an unusual long shot of the stage taken from one of the scaffold walkways. This last angle is exceptionally exciting for a studio nerd like me because I think it shows the glass window of the viewing gallery; where people can look down and observe recording without entering the studio. Obviously in this case the gallery is empty, and it might just be a reflective wall panel, but it could be the viewing gallery window. Imagine that! Mention also needs to be made of the Mai Tai stage. The backdrop is a classic of 1980's design; geometric slabs of yellow red and blue shapes, sharp angles, and a graffiti effect. 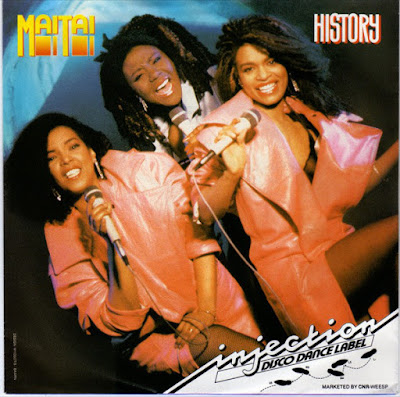 [22] Kool & The Gang: Cherish . Simon Bates manages to tie himself in knots while introducing Kool & The Gang. He has two objectives. One, to introduce the song at hand. Two, promote the Sunday afternoon The Montreux Rock Festival. Objective two goes without a hitch, objective one not so much. Simon Bates' link somehow leaves the viewer expecting to see Duran Duran while Kool & The Gang barely get name checked. Who produced The Montreux Rock Festival? Why it's Top of the Pops own Michael Hurrll. And who presents it? Why it's Noel Edmonds, star of the Michael Hurll produced The Noel Edmonds Late Late Breakfast Show. Small world, isn't it? The Montreux Rock Festival was scheduled for 4.45pm Sunday 09/06/1985, neatly sandwiched between a 1956 film Private's Progress and Goodbye Mr. Chips (dramatised in six parts, produced by Barry Letts and music by Dudley Simpson). Just reading the Radio Times listing for Sunday afternoon makes me anxious that I haven't started my geography homework.
[21] Propaganda: Duel. Propaganda have come all the way from Germany to sing a musical tribute to their favourite episode of Blake's 7 .
Top 40 Breakers: [29] Sister Sledge, Frankie; [25] Madonna, Crazy For You; [23] David Bowie, Loving The Alien.
Top 10: [10] Scritti Politti, The Word Girl; [9] Billy Ocean, Suddenly; [8] Katrina & The Waves, Walking On Sunshine; [7] Jimmy Nail, Love Don't Live Here Anymore; [6] Animotion, Obsession; [5] Gary Moore & Phil Lynott, Out In The Fields; [4] The Crowd, You'll Never Walk Alone; [3]
1] Paul Hardcastle: 19. No audience dancing tonight. Unusually Top of the Pops plays out with the credits rolling over the video for 19.
PERFORMANCE OF THE WEEK: It should be Gary Moore & Phil Lynott, Out In The Fields but I've done them already, lets say Mai Tai, History. (John- Or we could say the glimpse of Bowie's new video..)