This charming film is not entirely what you might expect from Armando Iannucci whose reputation was made with dark comedic satire. Yet he has breathed life into this venerable tale giving it a contemporary spin only inasmuch as to show how identifiable a story it actually is. If for some reason you had no idea this was based on a book you might think it was penned recently as there’s nothing here that smells musty or old. Quite the contrary in fact- this adaptation is as fresh and enjoyable as run on the Yarmouth beach which provides one of its locales. But don’t accuse the director- who also co-writes with Simon Blackwell - of going soft as there is always a harder edge where Dickens is concerned.

The author’s florid style does  provide a lot to work with yet it can also leave little room for innovation without some extreme re-working, While this film has necessarily filleted the  intricately written original into bite sized parts losing whole characters and making up new plot a yet it loses none of the novel’s rich characterfulness and sense of hope. Transitions are delightfully conveyed vividly with backdrops falling away, characters wandering from one scene to another but this device never intrudes. In fact it fits in well with the main theme of an aspiring writer –even though at first David doesn’t even realise that is what he is. He writes down phrases and remembers people and moments on bits of paper and there is plenty for him to write about given the army of eccentrics he encounters. His life is as varied and subject to as many highs and lows as many a Dickens character with good times frequently undercut by sudden developments. Throughout David is given different nicknames and sobriquets reflecting how he hasn’t yet found his true self. When he declares during a crucial scene near the end “I am David Copperfield” it feels like a big, big moment.
Given the source material is such a dense novel this edited version means events fly by stealthily here perhaps because Iannucci senses that the characters themselves could be a little too larger than life for some modern viewers. Certainly they are an expansive and loquacious bunch and to bring them to life the director has cast without bothering much about racial origin or age; only David ages during the film, everyone else remains exactly the same. It’s a joy then to watch these great actors at work and a challenge which Dev Patel, who is in almost every scene once David grows up, rises too. Watching his energetic performance I felt he could take on any iconic role you might imagine and ace it. When he smashes the glass factory up in a cathartic scene it could be Jesus hurling the money lenders out of the temple. When he meets his Aunt’s family for the first time he could be the next Doctor Who!  (Wouldn’t that be just brilliant btw!)  He ably includes some amount of arrogance that David develops and which could easily have been lost. His David packs a modern energy which works surprisingly well with the Victorian words he speaks and he is easily up for the challenge of acting with a distinguished cast. 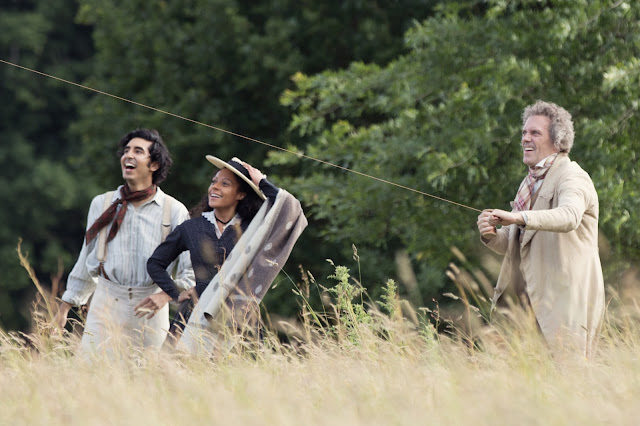 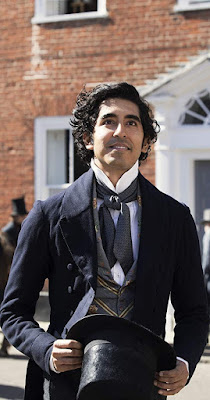 This is the second time in two weeks I’ve seen Tilda Swinton take on a role and wholly inhabit it, her Betsy Trotwood is prickly and prone to anger when she sees donkeys on the lawn (well you would be wouldn’t you) and so funny. Daisy May Cooper made me laugh the loudest though, her Peggotty is full of little asides and looks, I probably even missed some of them. Then you’ve got Peter Capaldi as the slippery and not as wily as he imagines he is Micawber, another master of comic timing as he manages to make his way through life despite everything. Benedict Wong is an absolute hoot as the alcoholic Mr Wickfield. There’s a very funny scene where everyone is trying to avoid giving him a drink so early. Ben Whishaw gets to inhabit the unctuous yet dangerous Uriah Heep whose barely concealed jealousy and class rage drives him well above his station. With an unflattering haircut and bent back Whishaw makes the character as repulsive as he is supposed to be yet not without allowing us a little understanding. Hugh Lawrie makes a perfect Mr Dick, the distracted and befuddled man who believes the thoughts of the beheaded King Charles have flown into his mind. The sequence where he and David fly a kite with all the troubled thoughts written on it is a joyous delight.
Iannucci heightens the moods at all times as that the upturned boat at Southend beach is very bright and colourful while the bottle factory is impractically dark and gloomy for a workplace. Sometimes the breezy tone does mean that events simply tumble into view before we’ve had a chance to lap up the previous happening but there should be much value to be had from a second watch. Iannucci himself has suggested the actual story is “the least interesting part” of a novel he has always cherished and he has managed the delicate trick of adapting without losing the essence. Inevitably Dickens scholars will snipe but this is a lovely, uplifting and extremely well performed and presented movie well worth seeing. Its out to buy, stream and watch in various formats this week and you really should see it.